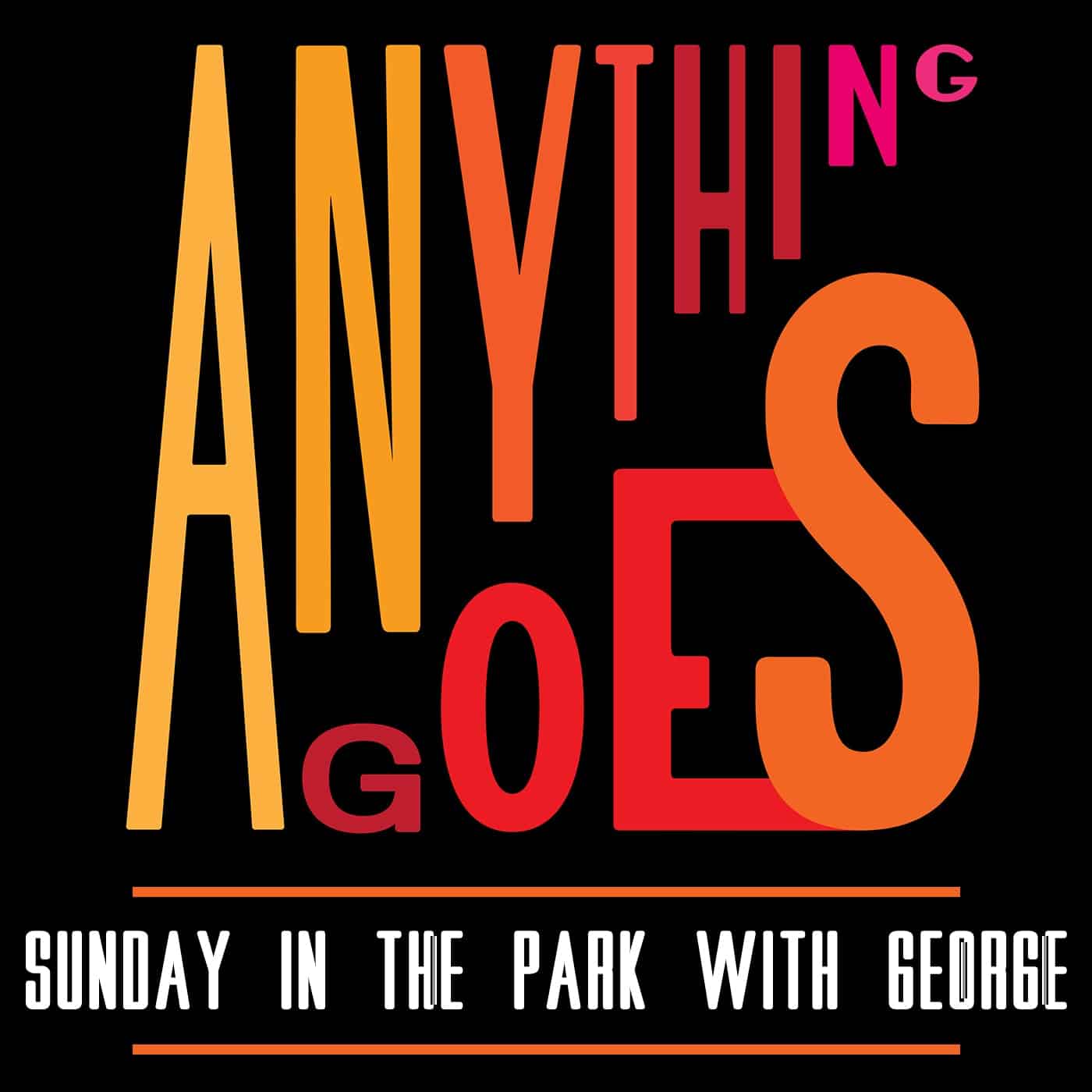 01 The Making of “Sunday in the Park with George”

Hi, this is Paul Lazarus. In the 1980s, I produced and hosted a radio series called Anything Goes, a celebration of the American musical theater. Now, the Broadway Podcast Network is bringing back these shows. This first episode originally aired in 1986 and features Stephen Sondheim and James Lapine discussing The Making of “Sunday in the Park with George.” I sat down with the composer-lyricist in the game room of his New York brownstone. In those days, almost 40 years ago, I would haul my not-so-state-of-the-art recording equipment to interview Broadway’s Best.

This is ANYTHING GOES, a Celebration of the American Musical Theater--past present and future. I’m your host, Paul Lazarus. Today, THE MAKING OF SUNDAY IN THE PARK WITH GEORGE, Stephen Sondheim and James Lapine’s Pulitzer Prize-winning musical suggested by the life and work of the painter Georges Seurat.

“SUNDAY IN THE PARK WITH GEORGE” (Mandy Patinkin and Bernadette Peters)

Seurat’s painting, “A Sunday Afternoon on the Island of La Grande Jatte,” had long fascinated writer and director James Lapine.

Interview
Lapine: Well, it’s a mysterious painting and I tend to be drawn to those kind of things. The images that are hard to sort through, and I like something you have to stare at a long time. I like theater that you have to go back to again or re-read to get and it’s that kind of a work. It’s very mysterious and very hard to take in in one viewing.

Lapine, who has worked as a photographer and graphic designer, used Seurat’s painting as an image in an early theater piece. When he met with Stephen Sondheim to discuss writing a musical together, Sondheim was struck by this theatrical use of Seurat’s masterpiece.

Interview
Sondheim: One of the paintings he had used was the Grande Jatte and we started to talk about that painting. We realized it was like a stage set. We started to wonder why all those people weren’t looking at each other, because nobody in that painting is making any contact with anybody else.

And we thought maybe they’re all hiding from each other, and maybe they didn’t mean to be seen in the park on the same day with each other, maybe they were interconnected in ways they were concealing. And we began to fantasize about it, and then Jim said they key thing, he said, “the most important character is missing,” and I said, who? And he said, “the artist.” And once he said that, it all clicked into place.

“COLOR AND LIGHT” (Many Patinkin and Bernadette Peters)

When they began to write, Lapine and Sondheim went to the Art Institute of Chicago to study “La Grande Jatte.”

Interview
Lapine: The curator of that collection came along with a visiting curator from another museum, so it was fun to hear them sort of banter about what was going on in the painting, the technique and whatnot. When we sat down to write, I did not do very much research work at all. I did not want to be hung up by what I had read. And I’m glad I didn’t, because when I did sit down to read, I was amazed that certain things I picked up on and certain things I missed completely in terms of what the painting was about. And it was more important to me to just react to the painting as any non-informed observer might and have my own fantasy run wild with that image.

Sondheim and Lapine gave personalities to the various figures depicted in the painting—like these two: a cook and a servant played by Nancy Opel and Brent Spiner.

“THE DAY OFF” (Nancy Opel and Brent Spiner)

Sondheim found that Seurat’s scientific approach to painting provided him with an important clue as to how to compose the score.

Interview
Sondheim: I thought, isn’t it interesting he’s got 11 basic colors and white, which makes 12, which is the number of notes in the scale. Then I thought

it might be interesting to start making parallels. And in playing around with that, I arrived at the musical style, which is essentially a superimposition of one harmony on another the way he superimposed one color on another. Rather than using, often, harmonies that blended, I tried to juxtapose them in the way he did.

Interview
Lapine: She really looks like a 19th century woman to me, and she also seems to be the kind of woman that you would want to put on a canvas. She’s so unusual looking and so beautiful and so delicious that it seemed to me the kind of person who, you love her for who she was, but also as a subject. I also thought of Bernadette, as I said, being an amazing talent and I really was excited about her doing something she could really dig into because I think it’s rare in her case as well as Mandy’s to find people who sing as well as they sing and also act with the kind of depth and honesty that they do.

Mandy Patinkin was cast as the painter, George. Sondheim wrote one number for him, “The Day Off,” in which he was called on to imitate a duet between two dogs. Sondheim had expected that this vocal feat would be accomplished technically with the use of the vocoder, an instrument which changes the pitch of the voice.

Interview
Sondheim: Mandy balked at this and said, “listen let me try it myself” and we thought oh my god, y’know, oh well, I guess let him feel free because that’s what you do with an actor to give him his head and of course, he not only did it brilliantly, he auditioned three separate dogs for each of those characters. We got three black dogs and three pugs, each of a different character. And we literally chose them. But you don’t expect to get that

kind of versatility from a performer and it was astonishing and of course made it much better.

“THE DAY OFF” (Original Broadway Cast)

In the first act of the show George is abandoned by his mistress, Dot, because she feels he’s too absorbed in his work to pay attention to her. On the night she leaves he’s putting the finishing touches on her hat in the painting.

Interview
Lapine: Obviously his way of expressing his love is in the painting which is what he’s trying to explain to her. And her need at that point in time is for a much more tangible expression of love. And ultimately, as somebody pointed out, it’s true love to wait one hundred years for your guy to come back. And I think there is the notion that her wisdom leads her to believe that, in time, to understand that that was his way of expressing love, to put her in a painting was his highest form of an expression.

This is ANYTHING GOES with Paul Lazarus. The orchestrator of SUNDAY IN THE PARK WITH GEORGE was Michael Starobin.

Interview
Starobin: I had a lot of fun orchestrating “We Do Not Belong Together.” And I kept chuckling during it because I kept thinking of all the clichés people say about Stephen’s music being cold, and here was this passionate, angry song with this woman passionately making this statement and I had a great time in it with the strings and the horns orchestrating his counter melodies he had given me, adding a few of my own. Doing this passionate, almost operatic music, and thinking of what people were saying about this stuff being cold. It’s the kind of music I respond to, that gutsy, emotional music.

“WE DO NOT BELONG TOGETHER” (Bernadette Peters and Mandy Patinkin)

The second act of SUNDAY IN THE PARK WITH GEORGE took a long time to evolve. The show was initially conceived as a history of the painting from 1884 to present. Lapine and Sondheim decided, however, to skip forward to 1984 in the second act and show the dilemmas facing Seurat’s great-grandson, a contemporary artist. The show began previews on Broadway without two crucial numbers: “Lesson #8” and “Children and Art.”

Interview
Sondheim: So I knew there was going to be a song for the grandmother, Marie, and I knew there was going to be a song for George alone on the island, I even knew what they were going to be about, I just couldn’t write them. Matter of fact, the first performance, we were so anxious to get them in that I think “Lesson #8” went in first and we actually performed “Children and Art” shortly after, when I had written it before it was orchestrated so it was just a piano in the pit for a couple of performances. Just to get the shape of the piece, and it immediately became apparent that the shape was right and the line was, as they say in the play, continued.

Sondheim conceived the relationship between Dot and George as one long love song.

It’s like Scarlet and Rhett, when one is ready the other is not. And that you would feel it frustrated, a kind of coitus interruptus, until finally there’s some at the end of the play, a little coitus.

Lapine, reflecting on the painting by Georges Seurat that led him and Sondheim to create SUNDAY IN THE PARK WITH GEORGE, feels that its true greatness is its universality.

Interview
Lapine: When you look at Sunday Afternoon on the Island, what’s great about it is you’re going to see it differently than I’m going to see it. That’s what sort of makes great art, it appeals to any generation, to any society, because it speaks to them in the present time they’re in and is not dated by its subject or its technique.

You’ve been listening to The Making of “Sunday in the Park with George.” “Putting it Together,” James Lapine’s book on the history of this amazing show will be available in August of 2021. Sound mixing by David Rapkin. Continuity by Jeffrey Kindley. Associate Producer Jeff Lunden. Anything Goes – Backstage with Broadway’s Best is produced and hosted by Paul Lazarus. For more information, visit anythinggoespl.com and bpn.fm/anythinggoes. If you enjoyed this episode, be sure to rate and follow us. Thanks for listening.

Stephen Sondheim, James Lapine and orchestrator Michael Starobin discuss the creation of their Pulitzer-prize winning musical. Hear Sondheim and Lapine talk about working with stars, Mandy Patinkin and Bernadette Peters. From their visit to the Chicago Art Museum to see this famous Seurat painting to opening night at the Booth Theatre on Broadway, go behind the scenes on this remarkable show.

Featured songs from the original Broadway Cast Recording: “Sunday In The Park With George,” “Color And Light,” “The Day Off,” “Beautiful,” “Everybody Loves Louis,” “Dog Song,” “Finishing The Hat,” “We Do Not Belong Together,” “Children And Art,” “Move On,” and “Sunday.”