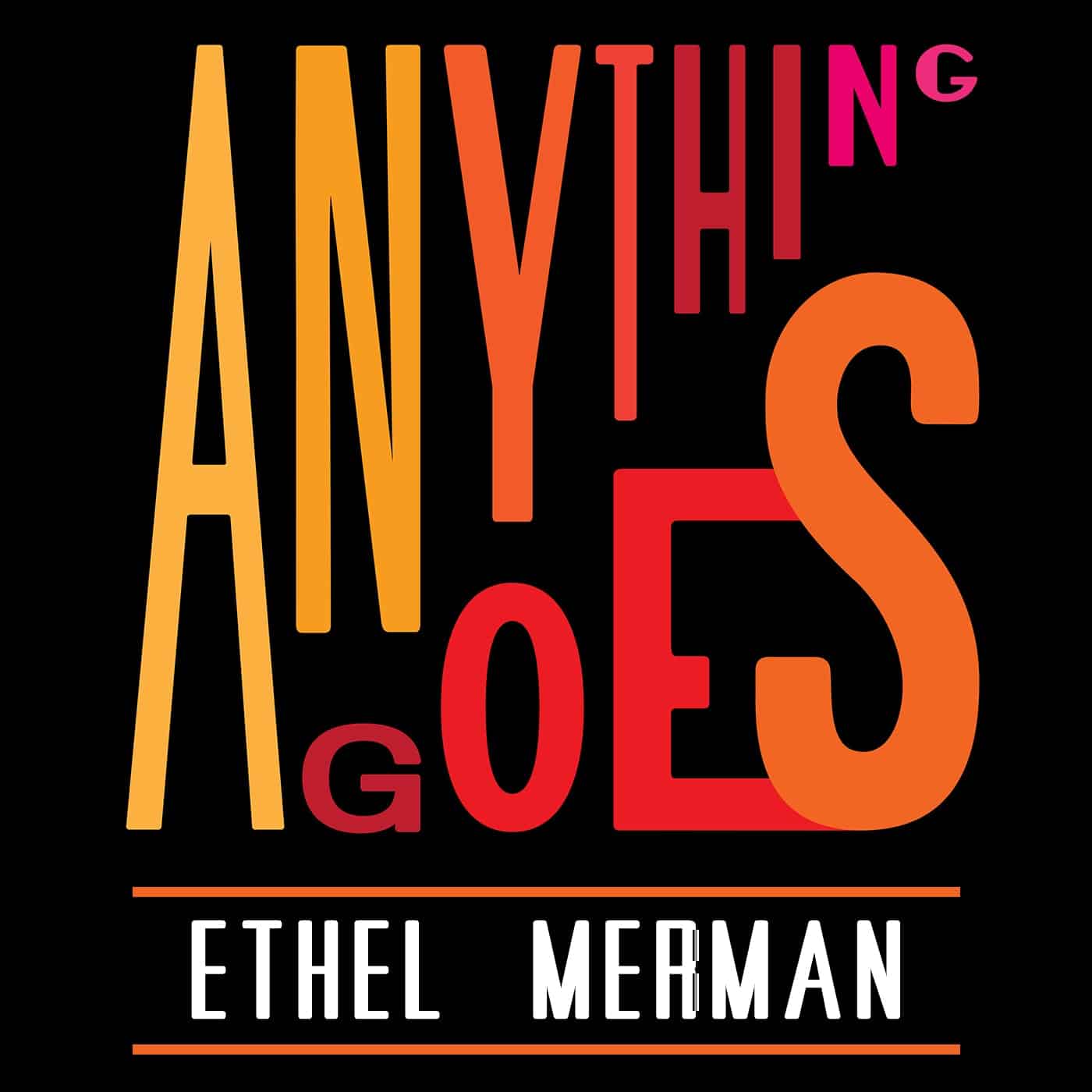 Hi, this is Paul Lazarus. In the 1980s I produced and hosted a radio series called Anything Goes, a celebration of the American musical theater. Now, the Broadway Podcast Network is bringing back these shows. This tribute to Ethel Merman originally aired in 1986, and takes a look at the remarkable career of the queen of musical comedy. Ethel Merman was unstoppable – at 71, she released a disco album of her greatest hits.

This is ANYTHING GOES, a Celebration of the American Musical Theater--past present and future. I’m your host, Paul Lazarus. Today, a tribute to the all-time best of the Broadway belters, Ethel Merman. For thirty years from GIRL CRAZY to GYPSY, one great showtune after another by Cole Porter, The Gershwins, Irving Berlin, Stephen Sondheim, and Jule Styne, was introduced to the world by the clarion voice of Ethel Merman.

George and Ira Gershwin’s GIRL CRAZY was Ethel Merman’s first Broadway musical. And she stopped the show not once, but twice.

Recording
Merman: Once upon a time, back in 1930, I stepped out on the stage of the Alvin theater in New York, got hit in the kisser with a big spotlight, and found myself in big time showbusiness. It was in a thing called GIRL CRAZY, which boasted Ginger Rogers, Willy Howard, and the DeMarcos, and a great score by George Gershwin.

In a recorded tribute for a 1962 benefit, Ira Gershwin looked back at Merman’s sensational debut on Broadway.

1962 Benefit Recording:
Gershwin: I well recall the night of October 14th,1930. That night really marked the beginning of everything that is so wonderfully well-known in the Broadway theater today as Ethel Merman. For that memorable night exactly 31 and a half years ago was the opening of GIRL CRAZY with you playing the role of Frisco Kate and your unforgettable singing of “I Got Rhythm,” “Sam and Delilah,” and “Boy What Love Has Done To Me.”

Although you, Ethel, were appearing in GIRL CRAZY for the first time on any stage, your assurance, your timing, your delivery both as a comedienne and as a singer with a no-nonsense voice that could reach not only the standees but the ticket takers in the lobby, convinced the opening night audience they were witnessing the discovery of a great new star, which continues to shine ever so brightly.

“I GOT RHYTHM” (Ethel Merman)

After GIRL CRAZY came George White’s SCANDALS and TAKE A CHANCE. And then, one of the biggest musical triumphs of the 1930s.

Recording
Merman: My next extravaganza was a show called Anything Goes, which was a big milestone in the American theater due to the fact that the writing team of Lindsay and Crouse first got together in double harness. When those two boys do a duet on a typewriter, everybody listens and likes what comes out. And with the great songs Cole Porter laid on my music rack, I had everything going for me.

In Merman, Cole Porter found the perfect interpreter of his songs.

Cole Porter Recording
Porter: It’s not like a voice, it’s like another instrument in the band, and absolute true on pitch. She can sharp a note or flat a note for effect, she knows that much. There’s one word I’ll always put in, and that’s the word terrific. She can make the word terrific really terrific.

“I GET A KICK OUT OF YOU” (Ethel Merman)

Bob Hope Recording
Hope: He couldn’t have picked a greater artist or a greater gal than la belle Merman and I know because I’ve played with her—sorry, worked with her – many times, and when we played together in RED, HOT AND BLUE at the Alvin Theater, she hit such high notes that ferry boats answered back. She’s one of the big talents, one of the big voices of our business, I call her the “mouth that roared,” but she also has a heart that roars for everything good, and I’m happy to join this tribute to her.

STARS IN YOUR EYES, with a score by Arthur Schwartz and Dorothy Fields, was Merman’s next Broadway vehicle. A somewhat creaky vehicle, as it started out as a satire on left-wing politics and changed on the road into a show about the sex life of Hollywood star. But Merman made it work with songs like “A Lady Needs a Change.”

Recording
Merman: Like Edie, Du Barry was a lady, which coincidentally was the name of my next show. In this lavish, Frenchie production, I was beaucoup gussied up as Madame Du Barry. And although I had all the good songs, the great comedian Bert Lahr was trés magnifique.

In an interview, Merman told Gene Shalit about her onstage antics with comedian Bert Lahr in DU BARRY WAS A LADY.

Interview with Gene Shalit:
Merman: Funny thing happened, he used to chase me across a big king-sized bed, y’know, as Louis XIV he had on his night gown and he had his cap on with the tassels or with the ball on the end, but he was so slow, y’know he would chase me. And one night we go over the bed and I came around and I passed him. It was the biggest laugh in the show, I kept going around and around, I passed right by him and said hi. Oh, he was a great artist.

This is ANYTHING GOES with Paul Lazarus. In 1946, Ethel Merman came up with a blockbuster to top even her blockbusters.

Recording
Merman: If you take Rodgers and Hammerstein as producers, add music and lyrics by Irving Berlin, then fold in a witty story by Dorothy and Herb Fields, and stir well with Josh Logan’s direction, you’ve got to come up with something atomic, and it happened with ANNIE GET YOUR GUN.

“I GOT THE SUN IN THE MORNING” (Ethel Merman)

There were more than half a dozen hit songs in Irving Berlin’s score for ANNIE GET YOUR GUN, and Merman established herself once and for all as the leading musical comedy star of her generation.

Merman followed up ANNIE GET YOUR GUN with CALL ME MADAM and HAPPY HUNTING, musicals tailor-made to fit her talents. And then in 1959 she surpassed herself by appearing in GYPSY, the landmark musical written by Arthur Laurents, Jule Styne, and Stephen Sondheim. “The best damn musical I’ve ever seen” said Walter Kerr.

Stephen Sondheim, lyricist of GYPSY, was surprised by Merman’s versatility.

Sondheim interview:
Sondheim: When we wrote Gypsy, none of us had any idea Ethel could act as well as she could. And so when we came to the end of the first act and Arthur had written this very stirring speech for her when her daughter has

run away, it obviously had to be topped with a song, but I had to work under the assumption that Ethel couldn’t act, because I had no idea that she could, I had only seen her play her traditional roles. And so, very pleased with myself, I thought rather cleverly, wrote her a “Blow, Gabriel Blow” kind of song, which was designed for the other two people on stage to act, the other daughter and the man, could act in horror while she sang this very up tune. And I thought, well that will be effective and that protects us from the fact that she can’t act. Well of course it turns out Ethel Merman could act perfectly marvelously, and she invested that song with so much feeling, if I knew then what I know now, I don’t think I would’ve written “Everything’s Coming Up Roses” I would’ve written something more difficult. For example, “Rose’s Turn” was written after we were in rehearsal. By then I knew how terrific she was.

Madame Rose in GYPSY was Merman’s last original role on Broadway. She explained to Gene Shalit why she decided not to create another great part, Dolly Levi in HELLO DOLLY.

Interview with Gene Shalit:
Merman: Gypsy was 2 years and then 9 months on the road, I was almost finished with the Gypsy tour when I was approached to do HELLO, DOLLY! And I didn’t want to go into another show, I mean, 2 years and 9 months is a lot of work, y’know, and then 9 months traveling and living out of suitcases and so forth and so on. So I turned down Dolly. And then in 1970, David Merrick approached me and asked me, would I do 3 months of Dolly. So, I said ok. Jerry Herman gave me two new songs for HELLO, DOLLY! which he had written for me if I had done it originally. No Dolly before me sang any of those songs.

“WORLD TAKE ME BACK” (Ethel Merman)

Ethel Agnes Zimmerman from Astoria, Queens singing “World Take Me Back,” written especially for her by Jerry Herman. Special thanks for this tribute to Ethel

Merman go to Steve Cole, Gene Shalit, Ira Weitzman, and the theater collection of the Museum of the City of New York.

You’ve been listening to a tribute to the late, great Ethel Merman. Sound mixing by David Rapkin. Associate Producer Jeff Lunden. Anything Goes – Backstage with Broadway’s Best is produced and hosted by Paul Lazarus. For more information, visit anythinggoespl.com and bpn.fm/anythinggoes. If you enjoyed this episode, be sure to rate and follow us. Thanks for listening.

Broadway’s greatest belter and star of GYPSY, ANNIE GET YOUR GUN, and CALL ME MADAM is honored with highlights from her 50-year career. From GIRL CRAZY to HELLO, DOLLY!, Merman dazzled audiences with her performances and powerful, brassy voice. Listen as she recalls working with Cole Porter, Bert Lahr, and Irving Berlin to create the roles that would go down in history. Ira Gershwin, Bob Hope and Stephen Sondheim talk about working with the Queen of Musical Comedy.