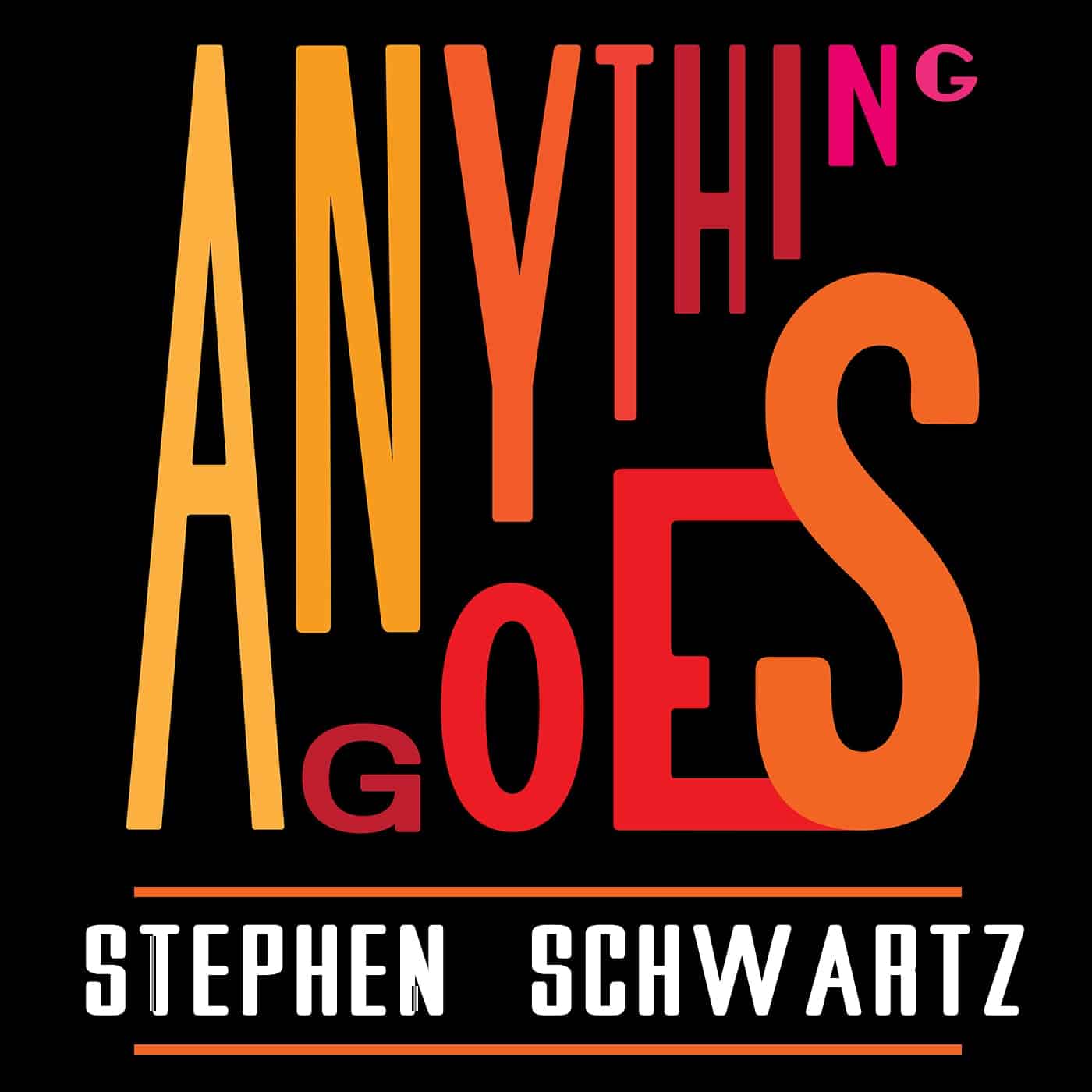 Hi, this is Paul Lazarus. In the 1980s I produced and hosted a radio series called Anything Goes, a celebration of the American Musical Theater. Now, the Broadway Podcast Network is bringing back these shows. This conversation with Stephen Schwartz originally aired in 1986. 20 years before he wrote WICKED, extraordinary songwriter Stephen Schwartz sat down with me in my living room and, luckily, recorded a few of his lesser-known songs on my crappy piano.

This is ANYTHING GOES, a Celebration of the American Musical Theater--past present and future. I’m your host, Paul Lazarus. Today my guest is Stephen Schwartz, whose music and lyrics for GODSPELL, PIPPIN, THE MAGIC SHOW and other musicals have made him one of the most acclaimed songwriters on Broadway.

I asked Stephen Schwartz about his earliest experiences in the musical theater.

Interview
Schwartz: Each show I’d see, I’d say, oh this is the best at that point. There were revivals at that time at City Center of musicals like FINIAN’S RAINBOW and BRIGADOON and I went to see all those things and was really knocked out by them. Probably the productions left something to be desired, but at that time I had no idea, I just thought they were wonderful. But then shortly after that, I went to see GYPSY, and I remember afterwards saying to my parents, that’s the best show I’d ever seen, and they said, “you say that every time,” but this time I knew it was, in fact, the best show I’d seen to that day, and it remained so for a long time thereafter.

After studying at Carnegie Tech, Stephen Schwartz came to New York determined to do his own magic in the musical theater. His first break came when the producers of the play BUTTERFLIES ARE FREE asked him to write a title song. It was sung by Keir Dullea, who played the part of a young, blind man.

Interview
Schwartz: I did this little folk song trying to keep all visual images out of it. That was the only sort of interesting thing and fun thing to do, was try to do a song which had absolutely no visual images in it – it’s a very short song – and also keep it believable that an amateur writer who didn’t know too many chords on the guitar, and I knew Keir was going to have to play it and he couldn’t really play the guitar, that he had done this song.

Composer-lyricist Stephen Schwartz, singing his title song from the play BUTTERFLIES ARE FREE. Schwartz’s first musical in New York evolved in a strange way. It began when he was invited to see a show put on by graduates of Carnegie Tech at Café La Mama.

Interview
Schwartz: I remember very well the day I went to see it was March 7th because I got the call to see it on my birthday, which is March 6th, and it happened to be a birthday which looked very bleak because there was nothing much in the offing. And I went the next day to see it and met with them the following week and said I’d like to do the score. And I remember they said fine, we go into rehearsal April 11th, and that was it. Five weeks later we went into rehearsal and there was the score.

It was the score for GODSPELL, the Off-Broadway hit that went on to international acclaim.

Interview
Paul: Why do you think “Day by Day” became such an incredible hit song?

Schwartz: I think really for two reasons. One is that it’s so repetitive that when you hear it you can sing it before it’s over, and that kind of simplicity and relentless repetition tends to make for hit songs because hit songs are things that people can remember. I also think that the sentiment of it and

the sort of light religious attitude worked at the time, and would probably work now. Sort of in the genre of “My Sweet Lord” or one of those things.

Interview
Paul: Was the incredible success of GODSPELL overwhelming at first?

Schwartz: I think it was. At the time I didn’t realize it. It’s only now looking back on how I felt and what my behavior was like and how I reacted to the world and other people that I realized that I really lost touch with reality to a certain extent. It was very, very overwhelming. The truth of what was happening, how big a success it was, was hard for me to comprehend because I had nothing to compare it to. I was catapulted into a kind of world and dealing with people that I really was not prepared for. And so I went in both arrogant and naïve which turned out to be emotionally a difficult combination.

Stephen Schwartz’s good gifts as a songwriter were demonstrated next on Broadway in the long-running musical PIPPIN.

Interview
Paul: PIPPIN, as you said, was a show that started in college days. How did it make the transition to a Broadway show from a college musical you had done at Carnegie?

Schwartz: With great difficulty. It was just one of those endless processes of rewriting and rewriting and accumulating people along the way. I worked on it for a long time. Ultimately, I found Roger Hirson who became the book writer and it got completely restructured and rewritten with him, then Stuart Ostrow the producer optioned it and it got restructured and rewritten again, and then when Bob Fosse the director came into it of course it was re-done again. So it was one of those constant evolutions with each new person bringing his own point of view and emphases to it.

“CORNER OF THE SKY” (John Rubinstein)

Interview
Schwartz: Somewhere along the line we knew that we wanted Ben Vereen to be involved. We saw him audition, we were all entranced by him, but there really wasn’t one role in the show big enough or worthy of his talent, and what we did was we combined a lot of little roles and used the character at the end of the show, this Leading Player at the end of the show to run all the way through. And so that presentational style became the frame of the show.

In THE MAGIC SHOW, Stephen Schwartz’s next score for Broadway, there was a remarkable song called “West End Avenue” which epitomizes the experience of coming of age in Manhattan.

Interview
Schwartz: Now, actually, it doesn’t have anything to do with me autobiographically because I didn’t grow up in New York City, I grew up on Long Island, and I wasn’t one of these Upper West Side city brats. But I think the emotional experience of living in this upper-middle class society and wanting to break out and wanting to rebel against it and not really knowing whether you have the guts to do it or not, I think that was an experience I knew pretty well and thus was able to write about.

This is ANYTHING GOES with Paul Lazarus. After the success of THE MAGIC SHOW, Stephen Schwartz deliberately tried to change and broaden his musical style by writing the score for THE BAKER’S WIFE, a classic French love story.

Interview
Schwartz: Well I did a lot of work upfront in terms of trying to assimilate and internalize the style. What I did basically was to listen for a couple of months before I began writing to nothing but Debussy, Ravel, Satie, and a lot of French music hall records. Edith Piaf and Eve Montagne and some older records, and also some records of French folk songs. And then I played on the piano a lot of Debussy and Ravel so that my fingers would sort of naturally, it would become like muscle memory. Then when I started to write I tried not to consciously imitate anything or write pastiche, just to write what I was going to write. But I hoped and think that I succeeded in successfully interpolating the sound without making it just an imitation.

Although THE BAKER’S WIFE closed out of town before its Broadway premiere, it was still a positive experience for Schwartz.

Interview
Schwartz: I know that BAKER’S WIFE whatever the problems in the show itself, was a big breakthrough show for me because I was able to use a lot of emotions that I was feeling about certain things that were going on in my personal life outside of the show, I was able to channel a lot of that into the writing in the way that I’d read about actors using emotional things from their past and their present in their performances. It’s sort of the writing equivalent of method acting, it’s method writing if you will.

Patti Lupone and Paul Sorvino singing “Gifts of Love” from THE BAKER’S WIFE. Stephen Schwartz’s next show on Broadway was a show that didn’t succeed commercially but has made a reputation for itself as one of the most memorable musicals of the 70s. It was entitled WORKING, and it was based on the book by Studs Terkel. Schwartz adapted and directed the show, and wrote four of its songs.

Interview
Schwartz: I heard about this book and I read I think an excerpt from it in a magazine or in the book of the month club news or something like that and I knew immediately that I wanted to do it, it just was one of those leaps of faith, or whatever.

One of the highlights of WORKING was an intensely personal song written by Schwartz called “Fathers and Sons.”

Interview
Schwartz: It derives from a wonderful speech in the show which comes from an interview with a steelworker where he talks about that the reason he works is for his son, and he says, when I see—he wants his son to be an effete snob, which was a Spiro Agnew quote of the day, and when he sees a young guy dressed up real fine and walking around that he’s looking at his kid and that’s what he wants his son to be. In other words that parents aspire for their children to have better lives than they have had themselves. And out of this, I wrote a song based a lot on my feelings for both my own son and my feelings about my father.

You’ve been listening to a tribute to the remarkably talented composer-lyricist Stephen Schwartz. Sound mixing by David Rapkin. Associate Producer Jeff Lunden. Anything Goes – Backstage with Broadway’s Best is produced and hosted by Paul Lazarus. For more information, visit anythinggoespl.com and bpn.fm/anythinggoes. If you enjoyed this episode, be sure to rate and follow us. Thanks for listening.

Twenty years before he wrote WICKED, Stephen Schwartz talks about GODSPELL, PIPPIN and other early shows. The composer-lyricist explains how he got his start on Broadway with the title song for BUTTERFLIES ARE FREE, and even sits down at the piano to perform some of his most personal songs. Hear about Schwartz’s process as he composed the scores to THE MAGIC SHOW, THE BAKER’S WIFE, and the musical he conceived based on Studs Terkel’s book, WORKING.