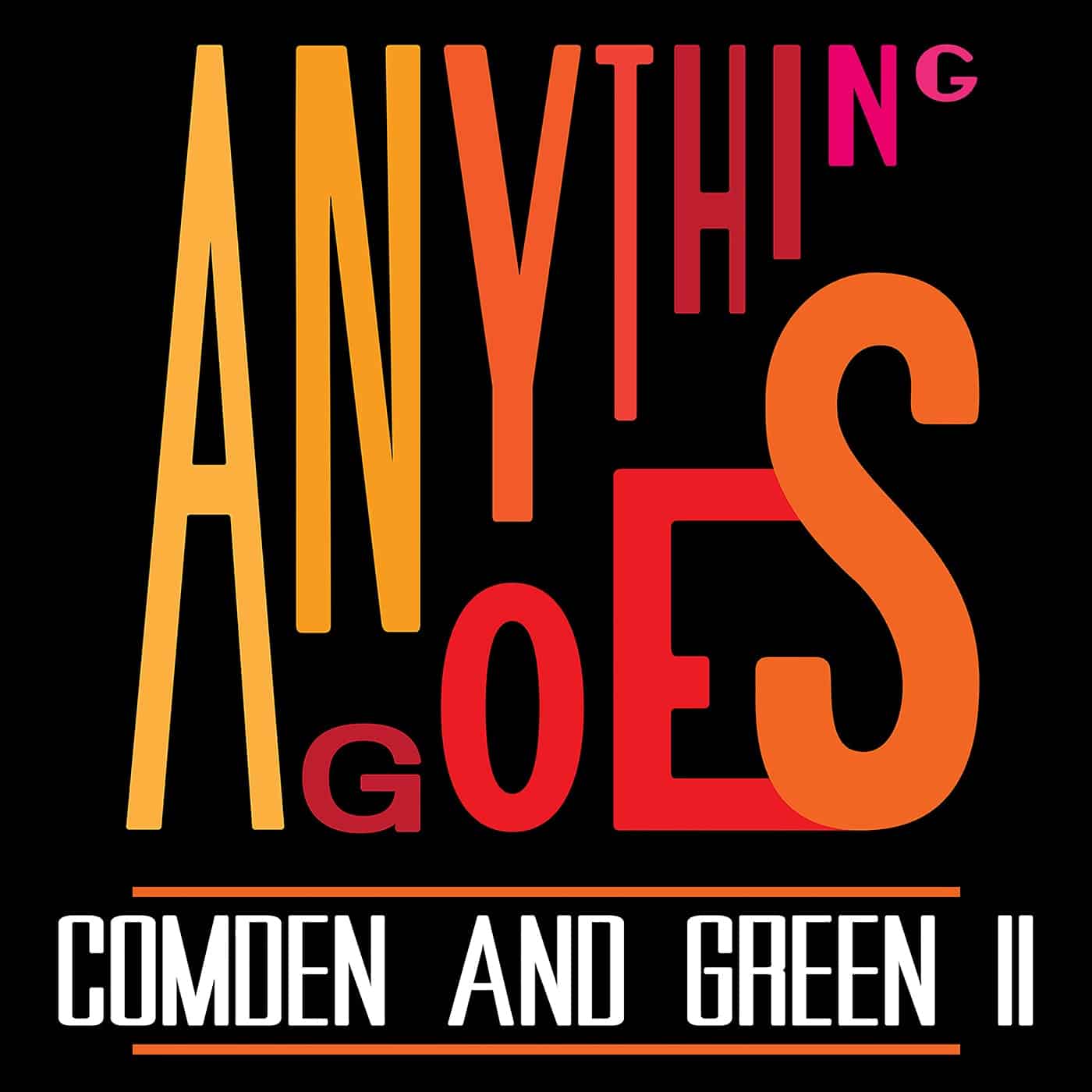 Hi, this is Paul Lazarus. In the 1980s, I produced and hosted a radio series called Anything Goes, a celebration of the American musical theater. Now, the Broadway Podcast Network is bringing back these shows. This two-part look at the work of writers Betty Comden and Adolph Green originally aired in 1986. Comden and Green are best known as the screenwriters of arguably the best film musical ever: Singin’ In the Rain. Here on Anything Goes, a look at their remarkable time on Broadway.

This is ANYTHING GOES, a Celebration of the American Musical Theater--past present and future. I’m your host, Paul Lazarus. Today, the second of two conversations with Betty Comden and Adolph Green, the writers whose forty year career on Broadway has given us many of the American theater’s greatest showtunes.

BELLS ARE RINGING, the 1956 musical hit by Comden and Green and composer Jule Styne, was written to showcase the talents of their old friend, Judy Holliday. Comden and Green wracked their brains to come up with the right role for her.

Interview:
Comden: We sat around a long time trying to come up with – we wanted to write an original, trying to get an idea, and then it was one of those accidents of happening to glance at the back of a New York telephone directory and seeing an ad for a big answering service. With the girls sitting answering, the switchboard, and she seemed like a new, modern, heroine. And I said to Adolph, well I don’t have an answering service, you have an answering service, what’s it like, where is it? And he said, “well I’ve never been there.” And I said well why don’t we find where it is and at least go and look at an answering service and see what they look like. And we found out it was right around the corner from Adolph’s house.

Green: Turned out to be a little brownstone.

Comden: Much like what you saw on stage actually.

Green: And when we walked in, there was a nice, plump lady sitting there. And she lifted the phone and said, “Gloria Vanderbilt’s residence.” And we knew—

Comden: An idea was born.

Interview:
Paul: Did you expect “Just in Time” to be the hit of that score?

Comden: “Just in Time” was a hit around town before it had any words because Jule was playing da-da-da-da-da-da-da-da-da and singing just those words. No, the idea came because we were looking for a simple love song. Adolph said, what about the Youman’s songs that are based on two notes or three notes or very simple melodies? And Jule said, “like this?” and he started to play it. He played it from beginning to end. So suddenly there was a melody, and we had no place for it, no title, it was just, as they say “da-da-da.” And a big smash at parties.

Comden: Oh yeah, he sang it as “da-da-da.” Everyone loved it. And we thought we could never match that possibly in the lyrics. But finally, as most things happen in musicals, it came out of the book – a situation arrived when we were writing the book of the heroine saving the hero from despair and disaster, and we said oh! And we were looking for a place to put this song and we thought of the phrase “Just in Time,” which fitted ‘da-da-da.’

Interview:
PL: Judy Holliday is so extraordinary, when you think of “The Party’s Over,” it’s hard to almost disassociate it from her. A lot of people have recorded it obviously, but there’s something magical about the response of the song to her voice and vice versa.

Comden: Well it’s a simple thing, Judy was a genius. She was an extraordinary actress and extremely musical. “The Party’s Over,” it’s interesting you mention that because actually Judy said, “look I’ll do anything in this show except sing a straight ballad.” Because you know we had come from The Revuers doing satirical songs and all that. And she said, “I can do comedy material, and I’ll do anything—”

Green: We said, “Judy, we’ve stood around pianos so many years and you’ve sung so many songs, ballads wonderfully.”

Comden: She said, “I couldn’t get up and sing it in front of people.” We knew one thing about Judy, she loved to sing harmony parts. “Obble-gobbles” she called them. She did great obligatos to everybody else’s singing in a high or low or ranging voice, and she loved to do that around the piano. When we wrote “The Party’s Over,” it was presented to her this way as the harmony part of something that would be sung and could she learn it?

Green: It would accompany the melody. So she wouldn’t have to worry.

Green: As a matter of fact, she sang it so self-consciously, she sang it facing the wall so we wouldn’t look at her.

“THE PARTY’S OVER” (Judy Holliday)

The musical, SUBWAYS ARE FOR SLEEPING in 1961, was suggested by a book about people who live in the New York City subways.

Interview:
Comden: It’s not a novel, it’s separate sketches about these different people’s lives. These people live these strange, minimal existences and just get along.

Green: It included the girl in the towel.

Paul: So, your job was to weave them together.

Comden: They had no connection, there’s no plot to “Subways are for Sleeping,” they’re separate little vignettes about various people and how they live on the subways. Making a story out of it is a monumental job which has yet to be done!

Green: No, no, we read the book of the show – our book – and were very pleased, it was much better than we remembered it.

FADE OUT FADE IN, a satire of Hollywood in the 30s, starred Carol Burnett. At one point in the show, she impersonates Shirley Temple and sings “You Mustn’t Be Discouraged.”

“YOU MUSTN’T BE DISCOURAGED” (Carol Burnett)

HALLELUJAH, BABY!, the next Comden-Green-Styne musical dealt with the provocative subject of race relations.

Interview:
Green: I guess we were being in a sense, daring, because none of us are black. We thought it was an important show to write and also we wanted there to be a show – there weren’t shows around then with black entertainers on stage. And we thought, my god that’s unnatural. There’s so much talent around that isn’t being used.

“MY OWN MORNING” (Leslie Uggams)

Leslie Uggams singing “My Own Morning,” from HALLELUJAH, BABY!

You’re listening to ANYTHING GOES with Paul Lazarus. Comden and Green joined forces with composer Cy Coleman to create the hit musical, ON THE TWENTIETH CENTURY, based on the famous play of the 30s.

Interview:
Comden: Most of the time we’re sitting around trying to think of something and it was our idea to musicalize The Twentieth Century.

Green: And we talked Cy into it. And we’re always a little reluctant when we do an adaptation. We always feel why, when a thing works so well in the original, who needs this? But we felt we had to do a show. And finally we really started happily embarking on it one day when we realized that it shouldn’t be just a musical pastiche of the early 30s, but the two characters were larger than life, extravagant creatures. One day, Cy said, “something like this?” He started playing something very Rossini-ish. And we said, yes that’s it! That’s what the whole show’s got to be.

Comden: That comic opera feeling. Because once we got that feeling we plunged in and had a wonderful time.

Interview:
Comden: I remember one night working ON THE TWENTIETH CENTURY, and we got the idea for “Life is Like a Train.” And we saw the four porters, and we also saw it as a kind of finale. It never worked out that way, but we thought it might be a finale for the show.

Green: We thought it was finale-like, like Falstaff. But we just thought of the utter absurdity of it.

A DOLL’S LIFE in 1982 was an adventurous Comden and Green musical that explored the life of Ibsen’s heroine, Nora, after she slammed the door.

Interview:
Green: Every show is a new experience and this was a completely new experience because we were prepared inwardly for a mixed press – y’know, a divided press. We felt something like that is bound to happen and we rarely delude ourselves about things like that. You just keep your fingers crossed. So we weren’t prepared for the rather—

Comden: Hatred. It’s not as if the critics would start by saying, “here’s a show with a lot of faults, but…” And then say some of the good things. They had nothing good to say about it. There’s a song, “Learn to be Lonely,” in the score and now when Adolph and I do a party, I sing this song. Not a performance goes by that we don’t get letters about it or a phone call or somebody wants to know where they can get the music. It’s something that really impresses people and moves them.

“LEARN TO BE LONELY” (Betsy Joslyn)

Interview:
Paul: You’ve had probably one of the longest, if not the longest, successful collaborations in musical theater history. First of all, how do you do it? How do you still keep writing together and working together?

Comden: We used to give the answer, simple fear kept us together. And hunger. It worked well, so we thought why not do it again. And we kept on working together. We meet every day, and we’re friends. It’s gone on and on.

Green: We still are and we’re anxious to make good.

You’ve been listening to the conclusion of a two-part look at the careers of book writers and lyricists Betty Comden and Adolph Green. Sound mixing by David

Rapkin. Associate producer Jeff Lunden. Anything Goes – Backstage with Broadway’s Best – is produced and hosted by Paul Lazarus. For more information and bonus materials visit anythinggoespl.com. If you enjoyed this episode, be sure to rate and follow us. Thanks for listening.

This is ANYTHING GOES, a celebration of the American musical theater. This program was produced with funds provided by the Corporation for Public Broadcasting through National Public Radio’s Satellite Program Development Fund and the National Endowment for the Arts. Sound mixing by David Rapkin. Associate producer Jeff Lunden. ANYTHING GOES is produced and hosted by Paul Lazarus, who is solely responsible for its content. Thanks for listening.

Betty Comden and Adolph Green walk us through BELLS ARE RINGING, SUBWAYS ARE FOR SLEEPING, FADE OUT – FADE IN, HALLELUJAH, BABY!, ON THE TWENTIETH CENTURY, and A DOLL’S LIFE. They describe their experiences working with composers Cy Coleman and Jule Styne and star performers like Carol Burnett, Judy Holliday, Leslie Uggams, John Cullum and Madeline Kahn. The conclusion of a two-part retrospective on their legendary careers.

Featured songs: “Bells Are Ringing,” “Just in Time,” “The Party’s Over,” “Subways are for Sleeping,” “You Mustn’t be Discouraged,” “My Own Morning,” “Saddle up the Horses,” “Life is like a Train,” and “Learn to be Lonely.”