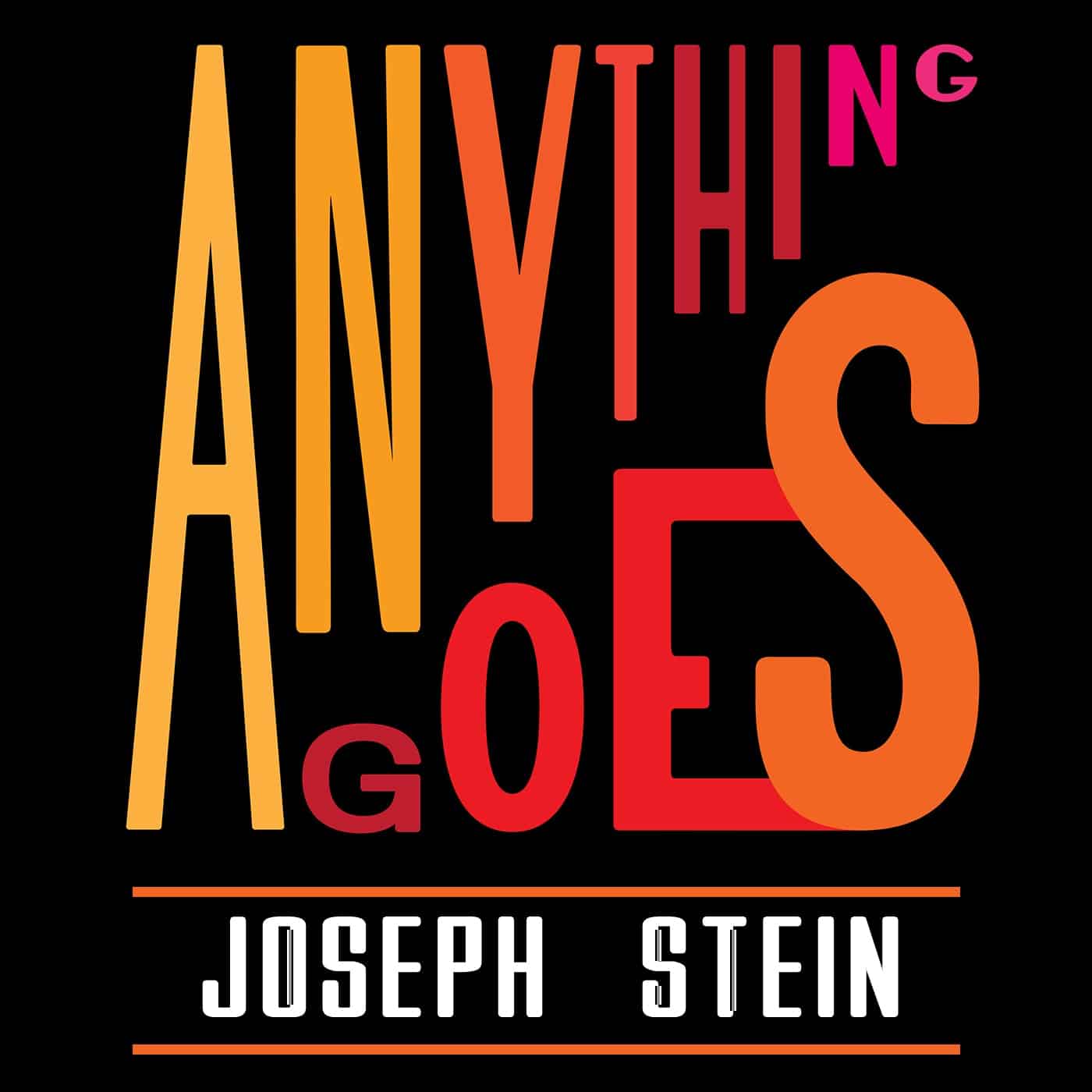 Hi, this is Paul Lazarus. In the 1980s, I produced and hosted a radio series called Anything Goes, a celebration of the American Musical Theater. Now, the Broadway Podcast network is bringing back these shows. In 1983, the late, great writer Joseph Stein spoke with me in my living room in New York. Later, I was incredibly lucky to work with Stein on a production of THE BAKER’S WIFE, based on the 1938 film. Stein collaborated with Stephen Schwartz on that show, which is discussed on episode 3 of Anything Goes.

This is ANYTHING GOES, a Celebration of the American Musical Theater--past present and future. I’m your host, Paul Lazarus. Today, my guest is playwright Joseph Stein who, for the past 30 years, has written the books for some of Broadway’s best loved musicals, including PLAIN AND FANCY, TAKE ME ALONG, ZORBA, and most notably, FIDDLER ON THE ROOF.

Excerpt from FIDDLER ON THE ROOF (Joseph Stein and Elisa Loti)

Joseph Stein and his wife, actress Elisa Loti, performing the roles of Tevya and Golde in FIDDLER ON THE ROOF, the musical he wrote with songwriters Jerry Bock and Sheldon Harnick. Stein has distinguished himself in the very elusive craft of musical book writing.

Interview
Paul: Can you pinpoint what general things attract you to a project?

Stein: There are a number of things I look for. Because it’s a musical, it has to have a certain different kind of size and different kind of tempo. I mean, y’know, real life people don’t sing to each other. When the music starts, I think an audience expects a different rhythm than, say, in a play. So what I look for first of all, is a character or a group of characters who are outsized, who are slightly larger than life. In other words, a character who has the right to sing, in a sense. And secondly, I, personally, look for a kind of community that’s intriguing. An area that is special and different. The kind of thing that always attracts me is a community of rather basic people, people with strong, open emotions rather than a sophisticated kind of community.

In PLAIN AND FANCY, the 1955 show with a score by Albert Hague and Arnold Horwitt, Joseph Stein put the Amish people of Pennsylvania on the musical stage for the first time. He and co-writer Will Glickman spent a great deal of time researching Amish traditions.

Interview
Stein: The thing about research which I learned from that is that you do as much as you can, and then you have to forget or put aside a lot of it because my original first draft of PLAIN AND FANCY was full of lots of information about the Amish. It was almost like a sociological tract. In the rewriting we combed away much of that and just had the essence of the Amish experience.

Interview
Stein: Plain and Fancy was a very joyous experience because we really had no trouble at all. I mean, we wrote the show, after a while we went into rehearsal, we made very few changes, it went on the stage in Philadelphia as I remember it, it was quite successful – out of town it was very successful – and I remember saying to myself, what’s all the fuss about? There’s no problems at all, it’s easy as pie, you just write it and they do it. It was the last time I had that experience, the first time and the very last time I had the experience where we had an absolutely no trouble show.

“THIS IS ALL VERY NEW TO ME” (Barbara Cook)

After PLAIN AND FANCY came MR. WONDERFUL, which Stein wrote as a vehicle for Sammy Davis, Jr.

Interview
Stein: One of the things I’m proud of about that show was that it’s the first time in a Broadway musical and maybe in a Broadway play where we had a black and a white performer who are supposed to be very close friends,

“WITHOUT YOU, I’M NOTHING” (Jack Carter and Pat Marshall)

The musical JUNO which Stein wrote with composer Marc Blitzstein lasted only two weeks on Broadway. It was based on the play “Juno and the Paycock” by Sean O’Casey, whom Stein greatly admires.

Interview
Stein: O’Casey sent me a letter when he read my libretto in which he said – and I was overwhelmingly pleased – he said he liked it very much. He says he can’t tell which was my work and which was his, which I thought was the highest compliment I could get. But in a curious way, it was – y’know, I felt great hearing that from O’Casey, but that was the mistake we made. We were trying so hard to be faithful to the play that we forgot we were working in a different medium.

Another Stein adaptation, this time of Eugene O’Neill’s “Ah, Wilderness” met with greater success. It was TAKE ME ALONG with songs by Robert Merrill.

Interview
Stein: There we went quite far from the original play, we were smart. I had learned from JUNO that I am not writing another version of O’Neill’s play. So I reconstructed the story in terms of, how will I tell it in musical terms? So it followed a different kind of form, it was much more open, we used much more of the community – in fact, “Ah, Wilderness” doesn’t use the community directly at all. And also I heightened one or two of the characters that were somewhat secondary in the play. I made them primary because they were much more musical characters, like the uncle who is played by Jackie Gleeson.

“TAKE ME ALONG” (Jackie Gleason and Walter Pidgeon)

This is ANYTHING GOES with Paul Lazarus. My guest is Joseph Stein, who in the 1960s wrote the librettos for the hit musicals FIDDLER ON THE ROOF and ZORBA.

Interview
Stein: There are certain kind of essentials in the writing of the libretto to me, I think. First of all, the relationships have to be sharp and clear. The subtleties are very hard to get in a musical. Also I think that the dialogue has to have a sense of economy without making it feel abbreviated. I mean, people in a play can meet and fall in love over an eight-minute scene and it has to be done in forty-five seconds maybe in a musical and still not feel like it’s brief. It has to feel true.

Excerpt from FIDDLER ON THE ROOF (Jeff Keller and Vicki Roulette)

Jeff Keller and Vicki Roulette in a scene from FIDDLER ON THE ROOF, written by Joseph Stein. This legendary show with songs by Bock and Harnick grew out of an idea Stein had in the early 60s.

Interview
Stein: At that time, my father was living with me, my mother having recently died, and he was telling me stories about the old country. I hadn’t thought of it as a musical, but I was terribly intrigued by the stories he was telling me, it sounded fascinating. At some point, someone – I don’t remember who – suggested a novel by Sholem Aleichem

Remembering Aleichem’s “Tevye” stories from his own childhood, Stein interested director Jerome Robbins in them as the basis for a musical.

Interview
Stein: We had long discussions with Jerry Robbins in the pre-production period about everything in this show. One of the things that we all talked about was, what is this show saying? What is it about? We said, y’know, it’s a breakdown of community and so on. And gradually, the word “tradition” started coming into our conversation more and more. Tradition gets broken

and so on. So out of that came the idea of starting with the fact that this is a community that’s totally based on tradition.

Sholem Aleichem’s “Tales of Tevye the Milkman” introduced vivid characters but didn’t involve them in a story that would be dramatically satisfying.

Interview
Stein: Each of these was interesting little anecdotes really. And what needed to be done was to have not only a total story, but a total story with a point of view and the sense of the breakdown of the community was something that we devised as the leitmotif. So each of these stories represented another crack in that small ethnic, tight community.

“DO YOU LOVE ME?” (Zero Mostel and Maria Karnilova)

Interview
Stein: I’ve often told the story of the Japanese reaction to this play. It was very successful in Japan. When I first got there, before it opened, the Japanese producer said, “do they understand this show in America?” and I was startled by the question, I said, why? I wrote this for America. I say, why do you ask? He says, “because it’s so Japanese.” And, y’know, I ask in what way is it Japanese? He says, “well we also – our traditions are being broken up, we have terrible trouble with our children who want to go in a different direction than us.” To him it felt like a Japanese story. So I guess it has that kind of universality.

Interview
Paul: Something you do better than anybody I can think of, is your ability to introduce the central character like Anthony Quinn in Zorba and immediately establish their presence, their humor, their richness in the opening scene. I can’t think of anyone else who does it better. What is your secret to that?

Stein: I don’t know if it’s a secret, but it it’s something I do concentrate on. I want the audience to know the person they are going to be with for the next two-and-a-half hours as quickly as possible and as well as possible. I give as much thought about that opening scene as to anything else in the play. About getting that character established well, hopefully with humor. And his relationship to somebody else and to the rest of the play. And I think the opening scene of ZORBA is – without it, we’d be in terrible trouble because that’s what the show is about.

Interview
Paul: What keeps you writing for the theater?

Stein: For one thing, I really love it. I mean, what else could I do that would make me happier? I enjoy the theater, I enjoy the collaboration, I like the people I work with, and it’s fun. And now, I’m luckily in the position where I can pick and choose, I don’t have to do something that I’m not crazy about because I have to make a living. So, I have the best of all possible worlds.

You’ve been listening to the words of celebrated theater book writer Joseph Stein. Sound mixing by David Rapkin. Associate producer Jeff Lunden. Anything Goes – Backstage with Broadway’s Best – is produced and hosted by Paul Lazarus. For more information and bonus materials visit anythinggoespl.com. If you enjoyed this episode, be sure to rate and follow us. Thanks for listening.

The legendary book writer of FIDDLER ON THE ROOF and THE BAKER’S WIFE, Joseph Stein, shares his writing process and his insights into what contributes to a good book of a musical. Together with Elisa Loti and Jeff Keller, Stein reads scenes from FIDDLER ON THE ROOF and ZORBA, discusses the challenging task of adapting existing work into musical form, and explains the importance of establishing the main character on the Broadway stage. He also relates his experiences crafting the librettos for PLAIN AND FANCY, MR. WONDERFUL, JUNO, and TAKE ME ALONG.