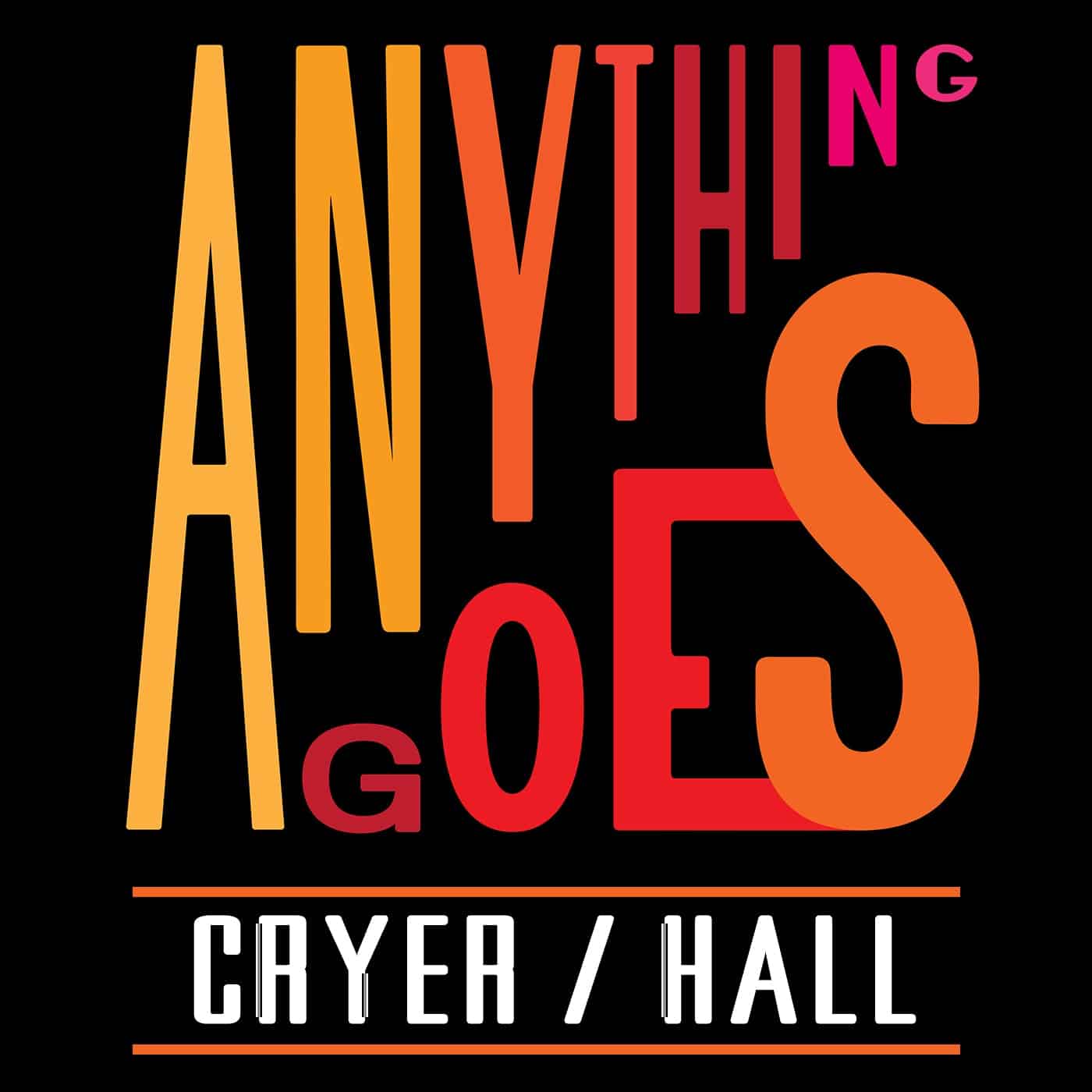 Hi, this is Paul Lazarus. In the 1980s, I produced and hosted a radio series called Anything Goes, a celebration of the American Musical Theater. Now, the Broadway Podcast Network is bringing back these shows. Today, a look at the careers of two writers, Gretchen Cryer, best known for her work on the autobiographical I’M GETTING MY ACT TOGETHER AND TAKING IT ON THE ROAD, and Carol Hall, who contributed the country-flavored songs to the Broadway musical, THE BEST LITTLE WHOREHOUSE IN TEXAS.

This is ANYTHING GOES, a Celebration of the American Musical Theater--past present and future. I’m your host, Paul Lazarus. Today, my guests are Gretchen Cryer and Carol Hall, two prominent songwriters working in musical theater today.

Interview
Cryer: At that point I didn’t really have professional aspirations in that direction at all. I was training to become a school teacher, which I did do, and I taught high school English for two years after graduation, not thinking I was going to go into the professional theater at all.

Gretchen Cryer and Nancy Ford made their New York debut with a short-lived anti-war musical called NOW IS THE TIME FOR ALL GOOD MEN. They followed it up with THE LAST SWEET DAYS OF ISAAC, an award-winning show which Cryer was inspired to write after reading Marshall McLuhan’s book, “Understanding Media.”

Interview
Cryer: In THE LAST SWEET DAYS OF ISAAC there are two acts, and they are two separate one act plays but they involve the same character: Isaac. And in the first piece he considers himself a live poet and he’s trying to make

every moment into an elevated totality, a work of art. But he’s so desperately trying to capture this work of art that he uses every means of technology to capture it. He wants to record his voice, he wants to be taking pictures of his life all the time, following himself around with a movie camera all the time, so that he has his life captured technologically.

“MY MOST IMPORTANT DAYS GO BY” (Fredericka Weber, Austin Pendleton)

Interview
PL: How would you describe Nancy Ford’s music for this piece?

Cryer: Baroque, rock. Her roots are classical not baroque. But she chose baroque keyboard figures to underscore the whole score. And then kind of put a beat with it. So it became a combination of Baroque and beat.

Cryer: Yes, right, that’s what it was.

“LOVE, YOU CAME TO ME” (Fredericka Weber)

Gretchen Cryer and Nancy Ford’s biggest hit has been I’M GETTING MY ACT TOGETHER AND TAKING IT ON THE ROAD. In the early 70s, Cryer and Ford were performing a cabaret act using songs drawn from their own personal experiences.

Interview:
Cryer: And one night in the middle of the cabaret act this phrase popped into my head: “I’m getting my act together and I’m taking it on the road.” Partly because Nancy and I were sort of having to pack up our equipment night after night and go out in a car and take it around places to sing. And I thought, that’s a good title for a show. And within an instant, within 30 seconds, I thought, we can write this show about this woman who’s a cabaret singer who’s getting her act together but her act is about her life and it’s really about her redefining her own life because she’s now going to write songs that represent the way she really feels about things.

“PUT IN A PACKAGE AND SOLD” (Gretchen Cryer, Margot Rose, and Betty Aberlin)

Cryer starred in I’M GETTING MY ACT TOGETHER to great success, but she had to be convinced by producer Joe Papp to play the lead in her own show.

thought if I was going to be doing rewrites I wouldn’t be able to sit out and really watch the piece and sculpt it the way pieces have to be sculpted in the rehearsal period. I thought it would be extremely difficult.

The highlight of I’M GETTING MY ACT TOGETHER was Gretchen Cryer’s performance of “Old Friend,” which was originally written as a birthday present.

Interview
Cryer: Craig Zadan, who was working for Joe Papp at the time, said, “I really think you oughta put ‘Old Friend’ into the show because it’ll be perfect! It perfectly deals with that relationship between the singer and her manager.” And he was right. We put it in there and it fit perfectly.

This is ANYTHING GOES with Paul Lazarus. One of the actresses who starred in I’M GETTING MY ACT TOGETHER during its long run was composer-lyricist Carol Hall.

Interview:
Hall: The first women writers I was aware of were from country music, and I think if you are going to talk about women writing music, you’re going to have to make a very interesting differentiation, which is that women have

always written country music. And that, since I was from Texas, was a part of my culture.

Carol Hall wrote songs for FREE TO BE YOU AND ME, an album produced by Marlo Thomas that questioned sexual stereotypes.

Interview
Hall: Go back 12 years ago. Women are very dissatisfied with men. Why? One of the reasons why is that men don’t tell you what they’re really feeling, so there are wives all over the country saying, “what’s on your mind? Why won’t you ever tell me if something’s wrong?” There are men falling over from heart attacks because they can’t express any kind of vulnerability or weakness or fragility. Now, if you take a good look at the way we were at that time educating our children – and I know because I had a little boy and a little girl, and if we were standing in line at the supermarket, and my son was three and was crying, all sorts of strangers without my asking would say to him, “don’t cry, boys don’t cry, be a man.” So, you grow up and you be a man and then you end up with a wife saying, “what’s the matter, Harry? You never tell me anything.” So, we wanted to write a song that said to little boys, it’s ok to cry. Sometimes things happen that are unfair and it’s all right.

THE BEST LITTLE WHOREHOUSE IN TEXAS was Carol Hall’s enormously successful debut on Broadway. She wrote the show with fellow Texans, Peter Masterson and Larry L. King. It was King’s playboy article that inspired the project.

over the dialogue that maybe this would be a good idea and that he would have to have nothing to do with it.

Interview:
Paul: Why do I feel that “Doatsy May” is a more personal song in that score? Why is that?

Hall: Because that’s the most Carol Hall song in the show. I mean, I know Carol Hall wrote all of them, but, y’know.

Paul: Why is that?

Hall: Because it’s a song about secrets, and I think that’s really what I write about. In a musical about women who work in a whorehouse, it was, in fact, I must credit, Pete Masterson’s idea that I take the one so-called respectable woman in the town and write a song for her. And he thought, and I agreed, that it would be very interesting to write about that woman’s sexual fantasies. About the fact that she always wanted to send off to [Fredericks?] of Hollywood, but couldn’t – she just couldn’t bring herself to do it – and to juxtapose that with all the girls that worked in a whorehouse.

More recently, Carol Hall has written a musical called TO WHOM IT MAY CONCERN.

they are saying, he’s hearing them say it in unison. If he could peek inside each of their heads, there would be a completely different story going on, generally in juxtaposition with the ritual.

“WHO WILL DANCE WITH THE BLIND DANCING BEAR” (Michael LeFlaherty)

Michael LeFlaherty singing “Who Will Dance with the Blind Dancing Bear.” While most of the score for TO WHOM IT MAY CONCERN is newly composed by Carol Hall, it includes some songs she wrote years ago.

Interview
Carol: One is called “Jenny Rebecca,” which was a song I wrote at the birth of two friends’ first child. In the show, that is a moment when the character is absolutely overwhelmed by the beauty of this newborn child. And I have to think that what made that song last, since Jenny is now an old person of twenty-one, is that we always do feel a sense of awe when we see a child born.

Carol Hall enjoys tailoring her song for specific performers. She wrote “Miracles” for Louise Edeiken to sing in TO WHOM IT MAY CONCERN.

You’ve been listening to the work of amazing writers Gretchen Cryer and Carol Hall. Sound mixing by David Rapkin. Associate producer Jeff Lunden. Anything Goes – Backstage with Broadway’s Best – is produced and hosted by Paul Lazarus. For more information and bonus materials visit anythinggoespl.com. If you enjoyed this episode, be sure to rate and follow us. Thanks for listening.

Gretchen Cryer, writer of I’M GETTING MY ACT TOGETHER AND TAKING IT ON THE ROAD, and Carol Hall, songwriter of THE BEST LITTLE WHOREHOUSE IN TEXAS, speak about their careers on the musical theater stage. Cryer details her inspirations and choices for I’M GETTING MY ACT TOGETHER… and sings several songs from the show. She also discusses her collaboration with composer Nancy Ford on the award-winning, THE LAST SWEET DAYS OF ISAAC. Hall, who performed in I’M GETTING MY ACT TOGETHER…, elaborates on her own work as a composer and lyricist. She speaks about writing for women, gender roles in the theater, and the songs she contributed to FREE TO BE YOU AND ME and TO WHOM IT MAY CONCERN.