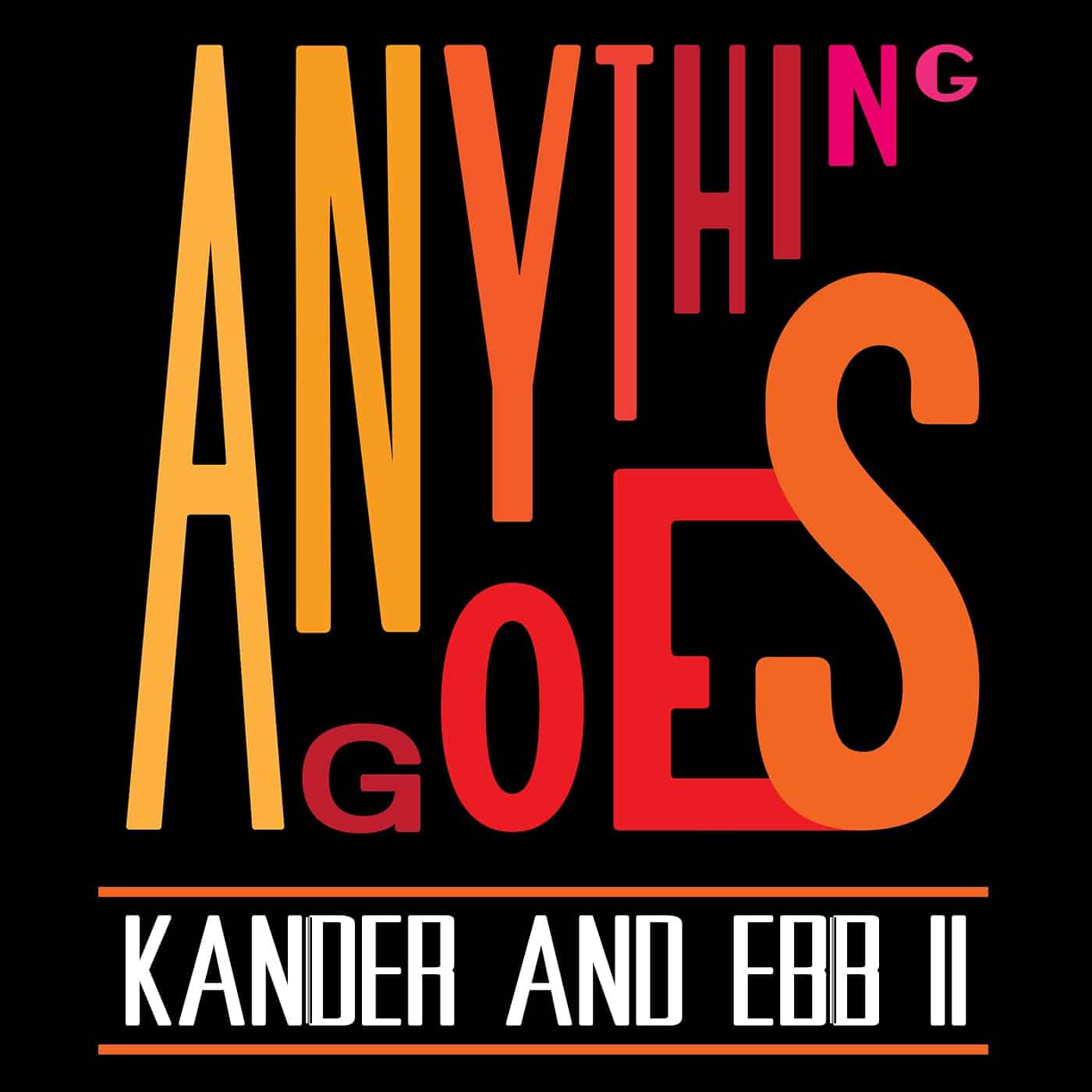 Hi, this is Paul Lazarus. In the 1980s, I produced and hosted a radio series called Anything Goes, a celebration of the American musical theater. Now, the Broadway Podcast Network is bringing back these shows. This two-part look at the work of writers John Kander and Fred Ebb originally aired in 1986. The amazing songwriters contributed to such Broadway shows as CHICAGO, THE RINK, and WOMAN OF THE YEAR. On ZORBA, they collaborated with book writer Joseph Stein, who was featured on an earlier episode of Anything Goes.

This is ANYTHING GOES, a Celebration of the American Musical Theater--past present and future. I’m your host, Paul Lazarus. Today, the second of two visits with songwriters John Kander and Fred Ebb, whose Broadway hits include CABARET, ZORBA, WOMAN OF THE YEAR, and CHICAGO.

“ALL THAT JAZZ” (Chita Rivera)

I asked composer John Kander what’s made his collaboration with lyricist Fred Ebb such a success.

Interview
Kander: We do come from very different places in our heads when we work, and yet we always – and this sounds Pollyanna-ish – but we really, without exception, we always have a good time when we’re writing. Even if we write crap and then tear it up and write it again. It’s always fun. Everything else is hard, but that’s fun.

Paul: Is that your favorite time, when you’re in that room alone?

“ALL THAT JAZZ” (Chita Rivera)

After the enormous success of CABARET in 1966, Kander & Ebb turned from Berlin to French Canada. THE HAPPY TIME was a new challenge for them and Kander learned to assimilate new musical styles.

Interview
Kander: I listened to some French-Canadian folk songs and French Canadian music not of a period really, but sort of generally, then forgot all about it. The musical style really is kind of operetta-ish in a way. It was to have big voices. It was the luxury of a big choral sound coming from kids – we had thirty little boys on that stage and they could make a mighty roar.

“I DON’T REMEMBER YOU” (Robert Goulet and Original Broadway Cast)

ZORBA was Kander & Ebb’s next assignment on Broadway. At first, they had reservations about the project, but producer-director Hal Prince changed their minds.

Interview
Ebb: When he called, we started by saying no thanks.

Kander: As I remember, the problem was we couldn’t figure out how on Earth you put anything that fast to canvas onto the stage, and we told Hal we didn’t think we knew how to do it, and we couldn’t do it. And then he began talking about what the opening could be, and by the time he finished describing the opening number we said yes!

Kander & Ebb performing “Life Is” at New York’s 92nd Street Y. The songwriters were indebted to Hal Prince for the clarity of his direction on ZORBA.

Interview
Kander: Hal’s conception of it was very clear I must say, from the very beginning. His guidance—

Ebb: We didn’t have to rewrite anything. The numbers were planned to be exactly where they turned out to be, the numbers we wrote were accepted by Hal, so we didn’t have to agonize – I mean, they just came. Also the source was so strong, I mean if you ever needed an idea, you only needed

to leaf through the book. The butterfly story is in the book so one had only to make it lyrical.

Kander: It’s funny though considering how down on the idea we were from the beginning, and now I look back and it’s one of the things I’m proudest of that we ever did.

70, GIRLS, 70, the musical about old people starring Mildred Natwick, brought Kander & Ebb back to Broadway in 1971.

Interview
Ebb: 70, GIRLS, 70 was a joyous show to watch because the audience always had a wonderful time and I got a tremendous kick out of that, and I still do. I can still remember it fondly and be happy about it.

Kander: Also working with those people was a tremendous lesson in how to live your life. Most of the cast was from age sixty-five to eighty-five and working with them and watching them live their lives to the hilt, you could not help but learn from that.

This is ANYTHING GOES with Paul Lazarus.

The musical CHICAGO, directed by Bob Fosse and starring Gwen Verdon and Chita Rivera, was a big hit for Kander & Ebb when it opened on Broadway in 1975. But its try-out period was hard on everyone involved.

Interview
Kander: There were problems out-of-town with that show and a lot of tension between a lot of people. And Bobby asked us to go off – very apologetically – and write a song for the end of the show to replace what we had there already. And he was really like, “would you mind, I hate to ask you this” and all that. And we looked at the floor and said, well all right we’ll do it. And we went off to the suite where the piano was giggling with glee.

Ebb: It was like he just sent us to Hawaii.

Kander: To go off and do what we do, which is to write. And we wrote a song called “Nowadays” which we liked a lot, and we wrote it very fast.

Ebb: In an hour, but we didn’t show it to him for four so we could just be quiet and talk to each other, and y’know, have a nice time. Have room service, sit there quietly, it was—

Kander: Yeah, next to writing I think Fred likes room service better than anything.

One of the outstanding moments in CHICAGO came when Barny Martin, playing Roxie Hart’s husband, sang “Mister Cellophane.” As Fred Ebb admits, it gave the only sympathetic character in a show full of gangsters and murderers a chance to express himself.

laugh at them, you can cheer them on, you can want them to get each other, you might even want another murder up there. But you sure don’t feel warm towards them, or like you’d like to take them home or anything like that.

WOMAN OF THE YEAR, starring Lauren Bacall, gave Kander & Ebb a chance to write a memorable comic duet for Bacall and Marilyn Cooper, as women who see life from different perspectives.

“THE GRASS IS ALWAYS GREENER” (Marilyn Cooper and Lauren Bacall)

Kander & Ebb’s next show, THE RINK, reunited two of their favorite performers, Chita Rivera and Liza Minelli, in mother and daughter roles. The setting was an abandoned roller rink which was about to be sold.

Interview
Kander: I had always imagined this taking place – have you ever been the Santa Monica pier? There’s an old, abandoned – I don’t know if it’s abandoned even – it’s an old carousel in a big building with very high, sort of seedy ceilings and stairs going up. And I always sort of imagined this taking place in that sort of place. And Peter Larkin’s set, as a matter of fact, is very close to what was in my head.

THE RINK’s run on Broadway was disappointing, but the show remains one of Kander & Ebb’s favorites.

Fred Ebb, speaking at a Lyrics & Lyricists series concert, chose one of the songs he’d written with John Kander as their most personal expression.

Lyrics & Lyricists:
Ebb: It’s a tradition at the Y to sing a song in the series I’m told that most closely expresses your own philosophy, and there is one. It’s from 70, GIRLS, 70 and it means more to us personally I think than any other song we’ve ever written.

You’ve been listening to the conclusion of a two-part look at the careers of legendary tunesmiths, John Kander and Fred Ebb. Sound mixing by David Rapkin. Associate producer Jeff Lunden. Anything Goes – Backstage with Broadway’s Best – is produced and hosted by Paul Lazarus. For more information and bonus materials visit anythinggoespl.com. If you enjoyed this episode, be sure to rate and follow us. Thanks for listening.

Part two of our conversation with John Kander and Fred Ebb, songwriters for such Broadway shows as WOMAN OF THE YEAR, 70, GIRLS, 70, THE RINK, THE HAPPY TIME, and ZORBA. They talk about their writing process and share several anecdotes about working with luminaries like Hal Prince, George Abbott, Liza Minnelli, Robert Goulet and more. Kander and Ebb share their love of writing together and going back and forth with Bob Fosse to create a perfect, climactic number for Gwen Verdon and Chita Rivera to perform in CHICAGO.