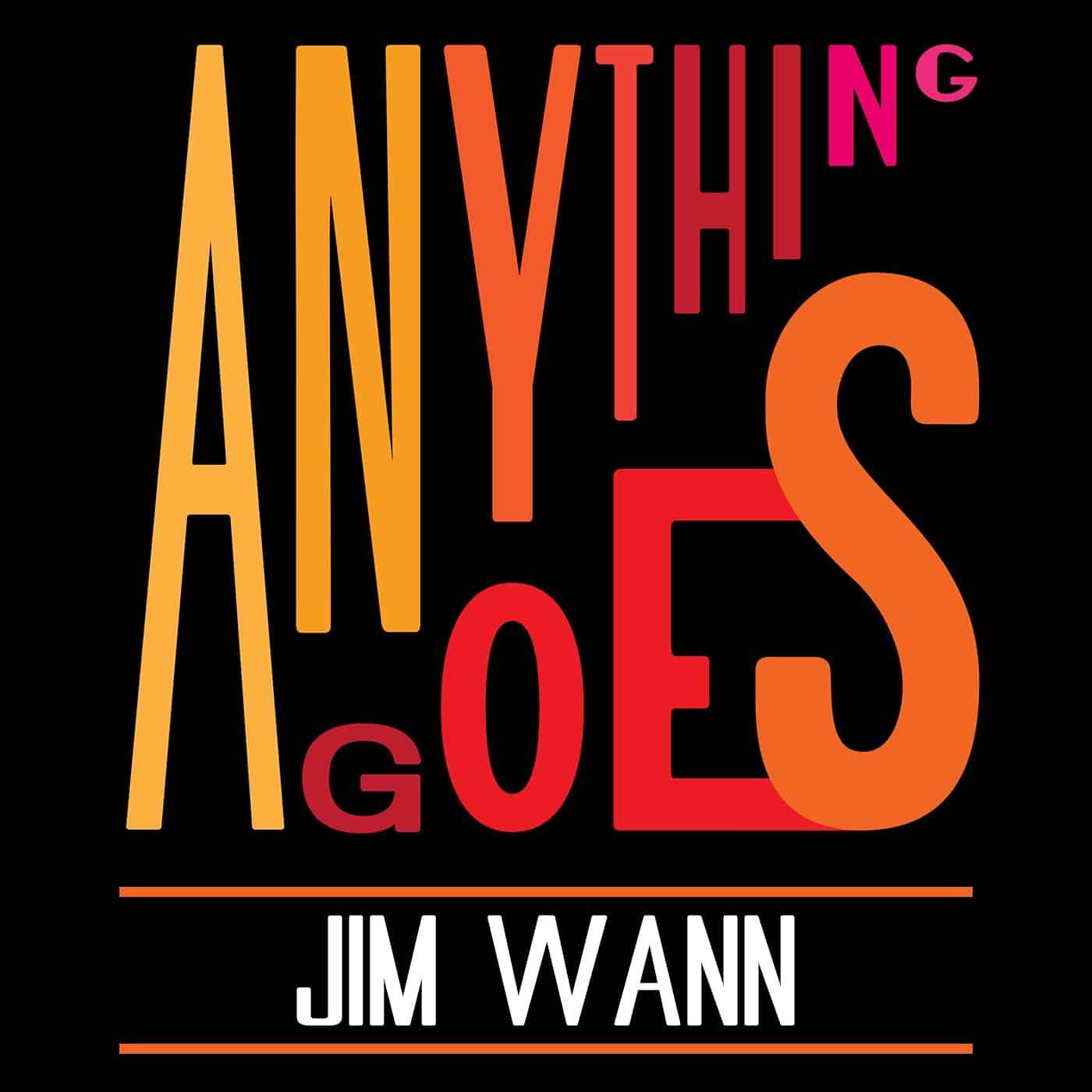 Hi, this is Paul Lazarus. In the 1980s, I produced and hosted a radio series called
Anything Goes, a celebration of the American musical theater. Now, the
Broadway Podcast Network is bringing back these shows. Today,
singer/songwriter Jim Wann talks about his scores for DIAMOND STUDS, HOT
GROG, and his first Broadway show, PUMP BOYS AND DINETTES. A true
gentleman of the South, Wann is heavily influenced by American Roots music and
is a marvelous guitarist and singer of his own songs.
This is ANYTHING GOES, a Celebration of the American Musical Theater--past
present and future. I’m your host, Paul Lazarus. Today we’ll be meeting one of
Broadway’s newest talents, composer-lyricist Jim Wann, who wrote the songs for
the enormously successful musical PUMP BOYS AND DINETTES, and the off-
Broadway shows DIAMOND STUDS and HOT GROG. Wann, who is a performer as
well as a writer, has brought the vitality of country music to Broadway. Here he is
singing “Highway 57” with the cast of PUMP BOYS AND DINETTES.
“HIGHWAY 57” (Jim Wann and Original Broadway Cast)

Jim Wann, a singer-songwriter of country music, found it an easy transition to
write for the theater.
Interview
Wann: This kind of music, country, folk, gospel, blues, it’s a storytelling kind
of music. Woody Guthrie is a storyteller, Bob Dylan is a storyteller, and
musical theater is a storytelling format, so I always felt like this kind of
music was a natural for musical theater. Not Broadway as we know it or
used to know it in terms of the great composers, but I felt like I could do my
own kind of music and put it together with a story and it would work.
Wann and his collaborator, Bland Simpson, have formed a band called the
Southern States Fidelity Choir, and they decided for a special occasion to tell the
story of Jesse James using the members of the band as actors. It became Wann’s
first musical, DIAMOND STUDS.

2
Interview
Wann: I was doing a little bit of writing on the side and had gotten
interested in Jesse James because I had just fathered a son and we had
decided to name him Jesse James Wann. Jesse being a nice name and
James being my name among others in the family. And so I thought, well
one of these days Jesse’s going to want to know why he was named Jesse
James, so maybe I’ll look into this a little bit. Y’know, I went to the library,
got some books out, read some stories about Jesse James, and it’s all very
episodic the way it’s come down throughout history. Before I knew it, I
found myself writing a song called “Cakewalk into Kansas City,” which was
my imagined version of the James gang on a Saturday night having just
robbed a train and getting ready to boogie.
“CAKEWALK INTO KANSAS CITY” (Jim Wann and Southern States Fidelity Choir)
Interview
Wann: We convinced the Red Clay Ramblers, who were an old-timey string
band, to perform with us and do the show. So there really were I think nine
or ten musicians on stage. It was set up like a band stand and the theatrics
were done in a storytelling style, we often faced the audiences when we
were doing our scenes and we used the guitars as guns and so forth. Before
each scene, some member of the cast would announce, “Iowa, 1881,” the
date and the place where the scene was taking place. It kind of came out of
the situation where we were already musicians. It came from that as
opposed to coming from somewhere else.
“CAKEWALK INTO KANSAS CITY” (Jim Wann and Southern States Fidelity Choir)
Interview
Paul: “Sleepy Time Down South” who sings that song, which character?
Wann: Well that’s a song that Jesse James and his wife, Zee James, sing to
each other in the second act. It’s the romantic moment in the show. This is
sung by Jim Wann and Cass Morgan.
“SLEEPY TIME DOWN SOUTH” (Jim Wann and Cass Morgan)

3
Jim Wann’s next show was a pirate musical, HOT GROG, also written with Bland
Simpson.
Interview
Wann: Well this gets directly into Cass Morgan because she came in and
auditioned for the first out of town company – it was gonna be done at
Washington’s Ford’s Theater – of DIAMOND STUDS, and she came in and
sang and it was just so thrilling, y’know, I thought, woah, hire that girl. The
more I listened to her sing, the more I liked it. After DIAMOND STUDS,
which was pretty much just a bunch of guys playing and singing except for a
few nice turns by the women, I wanted to do something that featured
women, and she had the voice that I wanted to feature. So Bland and I
started writing songs, I had been doing a little bit of going to the library just
like for Jesse James, and discovered these two female pirates – Ann Bonnie
and Mary Read, who were actual corsairs in the early 18 th century around
the same time as Black Beard and Calico Jack Rack ‘Em and other famous
pirates were flourishing. The music we wanted to write was going to be
getting into a pop sound, away from country a little bit, and into pop and
R&B and a little more musical theater, we wanted to stretch out a little bit.

Cass Morgan with John Lewis at the piano singing “Bound Away.” PUMP BOYS
AND DINETTES, the musical which brought Jim Wann to Broadway grew out of an
act he began at a restaurant in New York.
Interview
Wann: Mark Hardwick and I, who’s the piano player in PUMP BOYS, were
playing a summer job at the Cattle Man Restaurant. Playing in the lounge
doing eight to twelve, five nights a week. Mark had a gas station uniform, I
had some gas station songs, gradually we segued ever so gradually from
being the country band that they had hired – or the country duo I should
say – into being the Pump Boys. And a few months later we picked up
another couple of musicians and started doing some four-part harmony.
About this time, the Dinettes were cranking up their club act and they

4
would guest with us every so often. And the Pump Boys and the Dinettes
just went so well together that we decided to go forward in that
configuration and we got more theatrical – the Pump Boys did when we
added the women because they had definite ideas of who their characters
were. Up until then the Pump boys had just been a band.
“PUMP BOYS” (Pump Boys)

AD BREAK TRT 17:45:03
This is ANYTHING GOES with Paul Lazarus. You’re listening to an interview with
songwriter Jim Wann. One of the most memorable songs from PUMP BOYS AND
DINETTES, “Fisherman’s Prayer,” came from Wann’s own experience.
Interview
Wann: Well “Fisherman’s Prayer,” actually the story of it grew out of a
fishing trip that Cass and I took together and then I turned it into a song for
the Pump Boys. But basically the action it describes is based on a weekend
experience we had fishing off a fishing pier in Wrightsville Beach, North
Carolina. “Catfish” is an old Bland Simpson and Jim Wann song we used to
play in our band days back in Chapel Hill. And “Catfish” also features the
famous percussion break on kitchen utensils that the Dinette’s evolved.

Wann not only captures the spirit of country music in his theater songs, he gives it
his own, playful twist.
Interview
Wann: The song, “The Night Dolly Parton Was Almost Mine” is a very
straightforward fantasy. It’s not intended to poke fun at either the persona
of the singer or at Dolly Parton. It’s a fantasy I’ve perceived longingly
beating in the breasts of many a young man.
“THE NIGHT DOLLY PARTON WAS ALMOST MINE” (Mark Hardwick)

5
Most recently, Wann has been working on a musical called GUN FOR THE ROSES
with Patrick Tovat.
Interview
Wann: I’m real keen on developing this because I’ve always liked the blues
and jazz styles of the 30s and this particular show takes place in 1936. And
the plot hook is an attempted robbery of the handle at the Kentucky Derby.
So it takes place in Louisville, Kentucky.
Paul: What’s the handle?
Wann: It’s all the money that comes in and is bet on the horses for the race.
And also it contains the re-emergence of John Dillinger, who is supposed to
be dead, but is actually not. So we have Dillinger as a character, we have
the detective, which Patrick plays, and we have a couple of cops, a good-
guy-bad-guy cop act, one of whom plays a stand-up bass, we have a female
piano player who hangs out in a saloon and sings and is also part of the plot
as a character. So it continues the tradition we have here of performers
playing instruments on stage as well as being characters and singing.
Paul: Also you’re into great American criminals. There’s a connection there
between Jesse James and Dillinger – well pirates are a bit tangential to that
– but it’s interesting that a lot of these guys are on the outskirts of society.
Wann: It’s the hazy area between sunlight and shadow and moralities that
people deal with on the edge.
Paul: Well why don’t you get your guitar and play us a song from this new
score?
Wann: Hope I’m still in tune here. This is a song called “The Romance of the
Rented Room.” It’s the first song in GUN FOR THE ROSES, and it just kind of
establishes the mood you might say.
“THE ROMANCE OF THE RENTED ROOM” (Jim Wann)

6
Composer-lyricist Jim Wann has shown that the sound of country music can also
be the sound of Broadway. Here’s the final number, “Closing Time,” from his hit
musical, PUMP BOYS AND DINETTES.

You’ve been listening to composer-lyricist Jim Wann. Sound mixing by David
Rapkin. Associate producer Jeff Lunden. Anything Goes – Backstage with
Broadway’s Best – is produced and hosted by Paul Lazarus. For more information
and bonus materials visit anythinggoespl.com. If you enjoyed this episode, be sure
to rate and follow us. Thanks for listening.

Jim Wann, composer, lyricist, and performer of PUMP BOYS AND DINETTES talks about the Country and American Roots-influenced scores he brought to the stage. He discusses his early work Off-Broadway, including DIAMOND STUDS and HOT GROG, and explains the origins of both the Pump Boys and the Dinettes, and how they eventually made their way to Broadway. A marvelous guitarist and singer in his own right, Wann talks about how Country music is a natural translation to the stage due to its roots in storytelling through song.