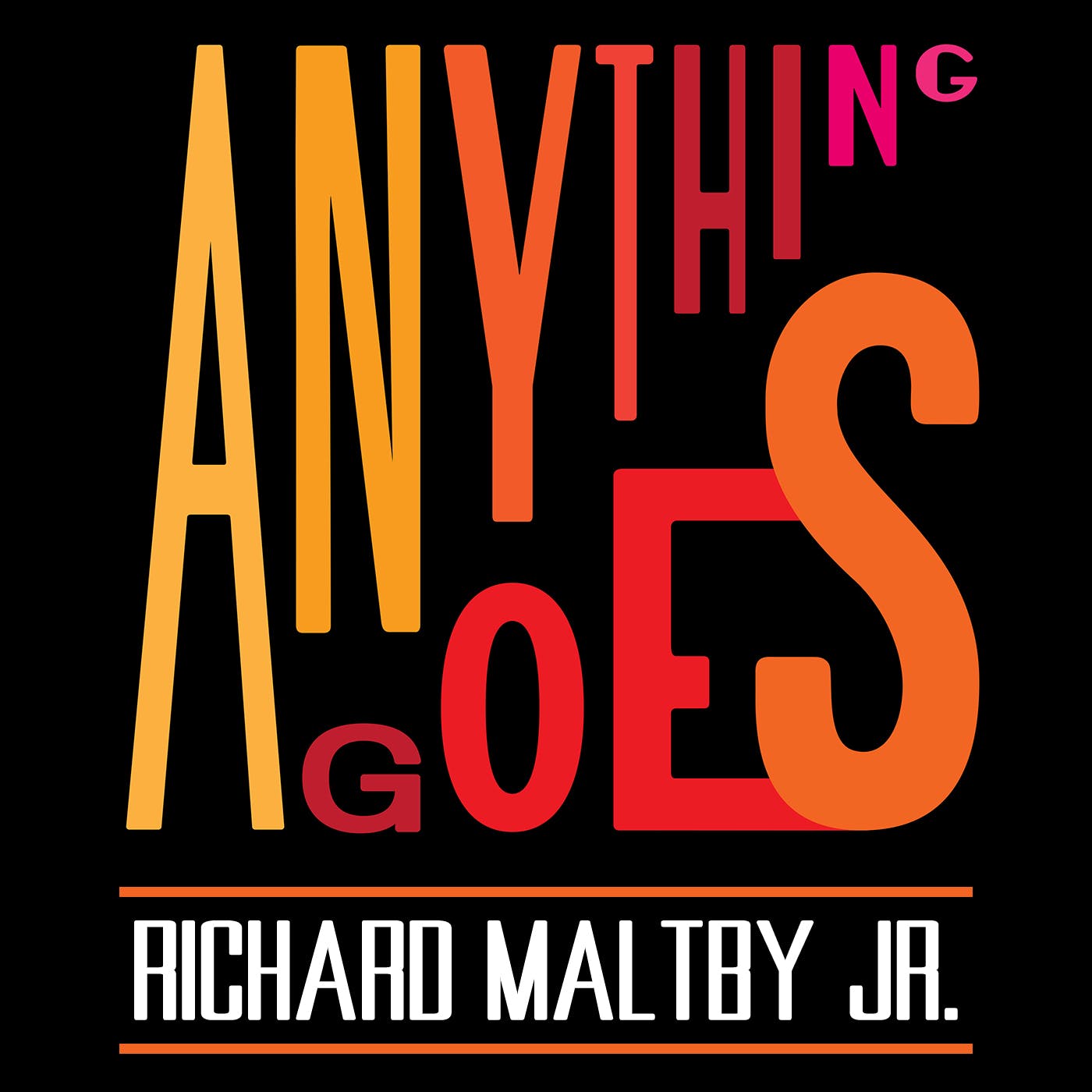 Hi, this is Paul Lazarus. In the 1980s, I produced and hosted a radio series called Anything Goes, a celebration of the American musical theater. Now, the Broadway Podcast Network is bringing back these shows. Today, writer/director Richard Maltby, Jr., who gave us such noteworthy shows as STARTING HERE, STARTING NOW, BABY, and the multi-award-winning Fats Waller tribute, AIN’T MISBEHAVIN’. This program originally aired in 1985.

This is ANYTHING GOES, a Celebration of the American Musical Theater--past present and future. I’m your host, Paul Lazarus. Today, a look at the career of Richard Maltby, Jr., whose talents as a lyricist and director have been amply demonstrated in the musicals STARTING HERE, STARTING NOW, AIN’T MISBEHAVIN’, and BABY. Here’s the opening number from BABY, “We Start Today.”

Interview
Maltby: I used to sing while I was mowing the lawn and make up all sorts of things, but I never wanted to be a lyricist or a songwriter. I wanted to be a set designer. I had a puppet theater, and the puppets didn’t do anything – they sort of dangled in the middle of the stage, but the scenery moved like crazy.

Richard Maltby, Jr. began writing songs with composer David Shire while they were both at Yale. “Autumn,” a number they wrote for a musical version of Cyrano de Bergerac, was the first real song they wrote together.

Interview
Maltby: It was also a major turning point in our creative relationship, too, because I was always sort of sitting over him, saying “Why doesn’t it do that? Why doesn’t it do that? Couldn’t that note go up? Why doesn’t it go to a climax there? Couldn’t it go higher?” You know, “Why don’t you hold that note?” And he would get angrier and angrier, and we did four or five different versions of this song that was going to be for Roxanne and the convent at the beginning of the last act. And after I’d driven him crazy, David came in and he played a song. And he just played it complete, sort of like, “So there. This one you will not be able to criticize.” And it was wonderful. It was “Autumn.” And it was on a different level than anything he had written before then. And I completely blew him away by saying “Well that’s wonderful.”

“Autumn” was later recorded by Barbra Streisand, as was the Maltby-Shire song, “Starting Here, Starting Now.” David Shire helped Streisand discover the song accidentally when he was working as a rehearsal pianist for FUNNY GIRL.

Interview
Maltby: It was a wonderful accident, except, of course, that it wasn’t an accident at all. David came in and placed it there every day until she finally – he knew that much about Barbara, that if you said, “Barbara, would you like to listen to the song?” you’d get nowhere. But if you put out there, just sort of leave it there, until finally she says “Oh, what’s that?” And he says, “Oh, well, it’s something or other.” “Oh, can I hear it?” “Well, you wouldn’t really…” “Oh come on, can I hear it?” And finally, he would deign to play it, and then she’d say “Oh, that’s wonderful.” Then it’s her discovery. It wasn’t in any way an accident. It was absolutely calculated.

In 1968, Maltby and Shire wrote a musical about computer dating called HOW DO YOU DO I LOVE YOU.

Interview
Maltby: It was the first show to use pop music sounds as the natural vocabulary of a character. Up until that point, there would be “the rock number.” And they would go – you know – the character would go to a club and they would do the rock number, or something like that. And it seemed logical that the characters really could express themselves. This could just be their natural music, just as any show music was. So we had a number of songs, the most notable, I guess, being “Just Across the River,” which was the natural – just the way the main character expressed herself.

Maltby’s much praised revue, STARTING HERE, STARTING NOW, was first tried out at the Manhattan Theater Club, where it featured many of Maltby and Shire’s favorite trunk songs.

Interview
Maltby: The one thing that came out of the show was that, since it had all been written in the past in a kind of sweeter period, there weren’t any songs that had a kind of a satiric, contemporary edge to it. And, so we thought when we moved it to a larger theater and made it a longer show that it needed those songs. And we added “I Don’t Remember Christmas,” and we added “I Don’t Believe It.” “I Don’t Remember Christmas” was kind of a major event too, because that was the song that I think I found a kind of personal vocabulary for ballad writing. The story that it has to tell is passionate as anything I can think of in any song, but it doesn’t owe itself to any other song that I know.
Paul: It’s a very distinctive song. George Lee Andrews performs it very distinctively.
Maltby: Stunningly, doesn’t he? He was wonderful in it.

Interview
Maltby: I discovered, by the way, that in STARTING HERE, STARTING NOW, essentially they have almost always the same – they’re all the same song, in a curious way. They’re always about cerebral people being defeated by their emotions. Defeated or made human by their emotions. Who do you think that could be about?

This is ANYTHING GOES with Paul Lazarus. My guest today is lyricist and director, Richard Maltby, Jr. AIN’T MISBEHAVIN’, the Fats Waller musical, was conceived and directed by Maltby in 1978. The show came out of a visit with his friend Murray Horwitz.

Interview
Maltby: When Murray called me down to listen to his Fats Waller collection, I went crazy because he was so witty. It wasn’t the jokes, it wasn’t the Fats Waller that everybody knew. What absolutely knocked me over was the piano music. He would play piano music, and you could feel him playing with the audience all the time. He was teasing them and caressing them and saying, “I’m gonna give you this note. You like that? I’ll give you that one. I’ll give you another one. How about this? You want this? I’ll give you this.” Notice the little hand up here doing that while the both – I mean he wasn’t saying these words, but that’s what the music was doing. He was teasing you all the time, and I thought, “Well, why not?” If a company of performers on the stage could play with the audience, tease the audience the way that Waller did, you’d have something that belonged on stage. And that was the first perception that I had, that actually held all the way through it.

Interview
Maltby: First day of rehearsal I showed a lot of movies. Every movie that had Fats Waller in it, and I told the cast to just look at these films. And I said, “I didn’t know what you would see in Waller,” and they didn’t have to tell me, but I said, “Find yourself in him, and use that.” Then the second day we started running through the songs, these great singers, the Waller persona, this great collection of songs, and I thought, “something’s going to explode here.”

Maltby and Shire’s BABY, a musical about pregnancy and how it affects three couples’ lives, had an unusual inspiration.

Interview
Maltby: It came from a page in Leboyer’s book about childbirth without violence, and when he says, “Think of it. All of its life the baby has lived in a completely perfect universe.” He doesn’t know that there’s another one. Suddenly the walls shift and they begin to press in on him and he begins to move. To go … he doesn’t know where. To some new place. All he knows is he has to leave this safe place and journey into the unknown. And it seemed that that’s a metaphor for all of the major changes in life. And then if we told stories that parallel that, in which our characters went through the same kind of emotional changes as they moved on. And of course a baby brings on those emotional changes in some cases. Certainly all relationships that I know of or have ever participated in went through a series of changes like that. And you have to leave some place that you’re comfortable in and go on to some other place and that’s kind of the process of being alive.

“WHAT COULD BE BETTER?” (Todd Graff and Liz Calloway)

Todd Graff and Liz Calloway singing “What Could be Better?” from the musical BABY, a show in which director-lyricist Richard Maltby, Jr. incorporated a great deal of first-hand experience.

Interview
Maltby: Children unleash these enormous emotional responses. In a curious way, they’re ones that you’re not supposed to do much with. When we talked to women, originally, we found out that many times they had never shared these credible feelings with their husbands. Sometimes not even with their friends. And yet they were the biggest – when we probed around – the biggest emotional events in their lives, in some cases. That for a fleeting moment you have a glimpse of something absolutely extraordinary, and it releases something in you that changes your life, and it seemed that those were something that no one has ever sung about and certainly they were worth singing about.

“THE STORY GOES ON” (Liz Callaway)

Interview
Maltby: Babies do change your life and they are hell and it is awful, but it is also wonderful and is also effortless. It is also true that babies slip into your life and somehow kind of take over and you just somehow deal with it. One of the things about a baby is that it is the most ordinary thing, or perhaps having a baby, is the most ordinary thing in life. It happens every day. And it is one of the few moments when you touch the transcendent miracle.

“THE STORY GOES ON” (Liz Callaway)

Liz Callaway singing “The Story Goes On,” from BABY, part of the ongoing career of director-lyricist Richard Maltby, Jr.

You’ve been listening to lyricist/director, Richard Maltby, Jr. Sound mixing by David Rapkin. Associate producer Jeff Lunden. Anything Goes – Backstage with Broadway’s Best – is produced and hosted by Paul Lazarus. For more information and bonus materials visit AnythingGoesPL.com. If you enjoyed this episode, be sure to rate and follow us. Thanks for listening.

Richard Maltby, Jr., director and lyricist of such shows as STARTING HERE, STARTING NOW, BABY, and the multi-award-winning Fats Waller tribute AIN’T MISBEHAVIN’, discusses his career from his earliest beginnings. He reflects on his work with composer David Shire, having their songs recorded by Barbra Streisand, and the challenges of adapting Fats Waller’s music for the theater.

Featured songs: “We Start Today,” “Autumn,” “Starting Here, Starting Now,” “Just Across the River,” “I Don’t Remember Christmas,” “Handful of Keys,” “This Joint is Jumpin’,” “What Could Be Better?” and “The Story Goes On.”