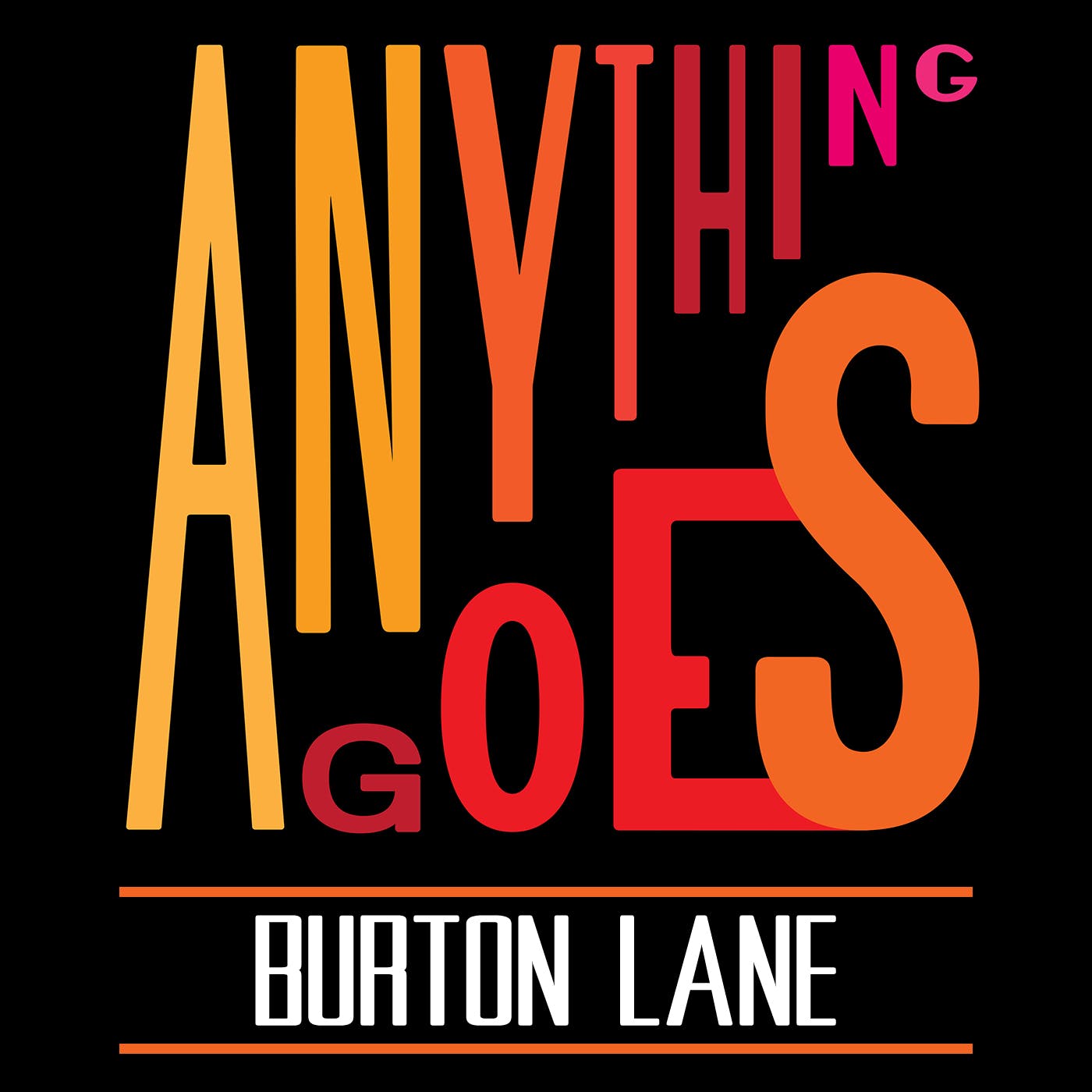 Hi, this is Paul Lazarus. In the 1980s, I produced and hosted a radio series called Anything Goes, a celebration of the American musical theatre. Now, the Broadway Podcast Network is bringing back these shows. Today, composer Burton Lane, who created music for such celebrated shows as ON A CLEAR DAY YOU CAN SEE FOREVER and FINIAN’S RAINBOW, as well as songs for over thirty films, including ROYAL WEDDING and BABES IN ARMS. Lane is also famous for discovering Judy Garland when she was unknown and performing as part of The Gumm Sisters.

This is ANYTHING GOES, a celebration of the American musical theater – past, present, and future. I'm your host, Paul Lazarus.

Today, a visit with one of Broadway and Hollywood's best-beloved composers, Burton Lane, who wrote the music for FINIAN’S RAINBOW, ROYAL WEDDING, and ON A CLEAR DAY YOU CAN SEE FOREVER. Burton Lane got his first break as a songwriter when he and lyricist Harold Adamson were sent to Hollywood in 1932 by Irving Berlin’s publishing company.

Interview:
Lane: I think we were each getting $75 a week, plus a modest expense account. Very modest. Extremely modest. So, we got an apartment out there and, through a fluke, within a couple days that we were there, we found ourselves out at the lot at Metro. And the first songs that we wrote and had in pictures were three songs that we had written for DANCING LADY. That was a big hit. That was my first big song hit was “Everything I Have Is Yours.”

“EVERYTHING I HAVE IS YOURS”

In Hollywood, Lane was teamed up with the enormously talented but relatively unknown Frank Loesser.

Interview:
Lane: I came in the day after they signed the contract. And there's a guy measuring Frank for shorts, for shirts, for suits. He went absolutely wild the minute he had his contract. Before that he had been broke. He had been terribly broke. Frank called me up and said “come over to my place, I'd like to show you some lyrics.” Frank was married to Lynn Loesser at that time. I had gone there after my dinner and I was sitting there. Frank said “have you had dinner?” I said yes. He said “are you sure you won't join us?” And I said “no, I won’t have anything.” Here’s what they had for dinner. They took out an apple and they sliced it in half, and they were going to give me a piece of that if I hadn’t had mine. They each ate half and one can of baked beans. I mean that's how broke these people were. They were really flat, you know? And the minute he had the contract, he was being measured. Not that he was going to make a fortune, you know, not yet, but the change was so dramatic and funny. We had some success with three or four songs in a very short period of time.

“THE LADY’S IN LOVE WITH YOU” (Shirley Ross, Bob Hope)

While in Hollywood, Burton Lane discovered the 11-year-old (sic) Judy Garland, who was performing an act called The Gumm Sisters in between movies at the Paramount Theater.

Interview:
Lane: She sang two songs: “Zing, Went the Strings of My Heart” and “Eli, Eli”. Those are the two songs. And I went into the lobby of the theater and I called the head of the music department at Metro. And I said ‘I've just heard a sensational kid and I think you ought to hear her.” He says “well, arrange to bring her out.” So, I went backstage and I introduced myself to her father and arranged the following week, when they had finished a run at the Paramount, to bring her out. And I played her audition. Her audition started at around 9 or 9:15, something like that, with L.B. Mayer, with the heads of the studio, and went down through every producer on the lot, every director on the lot, until about 7:30 at night. And I played the two songs, “Eli, Eli” and “Zing, Went the Strings of My Heart.” And in 1941 was the first time I actually saw Judy since that audition.
Paul Lazarus: Seven years later, wow.
Lane: And I went on the soundstage to start teaching her ‘How About You?,’ she and Mickey. And when she saw me, she ran the whole length of the soundstage, threw herself in my arms, and ‘my God, where have you been?’ I said I've been here!

“HOW ABOUT YOU?” (Judy Garland)

Interview:
Lane: Well I had a very uneven career in Hollywood. I learned something about my own abilities. One thing is that unless I'm working on something I truly like, I'm not really motivated to do my best work, and at 1939 I guess it was, ’38, ’39, I was going through a rough financial period. And I figured “well, I'm going to try to get a band together,” so I can have some continuity of work. And you keep working and still write. And this took me to Chicago, where I got a call from Alex Aarons of Aarons & Freedly, and he said “would you like to do a show,” and I said “yes.” He says “will you work with Yip Harburg?” I said “yes.” And I didn't even know what it was that I was going to work on. I dropped the band. I dropped everything. I borrowed some money and went to New York.

Al Jolson singing “Don't Let It Get You Down,” from Burton Lane’s 1940 Broadway musical, HOLD ON TO YOUR HATS. Another song from that show, “The World Is In My Arms,” demonstrates Lane’s bittersweet melodic gift. Here it is, performed by Steve Ross.

“THE WORLD IS IN MY ARMS” (Steve Ross)

This is Anything Goes with Paul Lazarus. My guest today is composer Burton Lane. The score he wrote with E. Y. Harburg for the musical FINIAN'S RAINBOW is one of Broadway's undisputed classics.

Interview:
Paul Lazarus: How did FINIAN’S RAINBOW evolve? How did that all get started?
Lane: Yip and Fred Sadie, who worked with Yip on the book, had done a first draft, and then Yip brought it to my attention, and his first thoughts were that I should split the score with Earl Robinson. Yip had written some songs with Earl Robinson, who had written BALLAD FOR AMERICANS. When he brought me this idea of FINIAN’S. I was bowled over. I thought it was simply wonderful. I thought the premise was wonderful. I thought what it had to say was wonderful, and the characters were marvelous and I was - I didn't think I would be able to do it. I said “you know, you should you should go for George Gershwin, not me.” I had that feeling and plus I had a feeling that the second act wasn’t very good. I had reservations about how they were treating the second act. So, between Yip’s reluctance to change the second act and my original fears, about three months went by before I said yes. And Yip did change the second act. Anyway we started to work on the show, and within the short time Yip saw that there would be a total clash of styles if I were to do half the score and Earl Robinson, because - although Earl was very capable doing the kind of things that he did best, they were not theatrical. And I had a vision of what I wanted to hear, and it had to sound as if it were true folk music, but still belong to the stage.

“LOOK TO THE RAINBOW” (Ella Logan)

Interview:
Lane: FINIAN’S broke new ground on many fronts, and the fact that we did a fairy tale, a fantasy, a social satire, all combined in one, was a very daring thing to do. And I was aware of this, except I loved it and Yip loved it and Freddy loved it, and if you love something enough and you do a good job it's going to come off.

“WHEN THE IDLE POOR BECOME THE IDLE RICH” (Ella Logan)

The movie ROYAL WEDDING in 1950 was notable not only for the dancing of Fred Astaire and the singing of Jane Powell, but also because it was the first collaboration of Burton Lane and lyricist Alan Jay Lerner.

Interview:
Lane: It’s a weird thing. “Too Late Now” never became a big hit, but it has become a standard, and the song to this day keeps increasing its performances. It's amazing. There are new recordings of the song and I think maybe one day it's going to happen. The song certainly has a life.

ON A CLEAR DAY YOU CAN SEE FOREVER, the musical about hypnosis and reincarnation, produced some hypnotic songs by Lane and Alan Jay Lerner.

“ON A CLEAR DAY (YOU CAN SEE FOREVER)” (John Cullum)

Interview:
Lane: Dick Rogers bowed out of the show and I was asked to come in. Alan brought out a bunch of lyrics to show me, that he had written.
Paul Lazarus: For Rogers to…
Lane: Yeah. And I went through all the lyrics and there was only one that I liked. And that was “Come Back To Me.” I changed the meter of it. I never heard Dick Rogers’ tune, but his tune, the rhythm of it was da-da-dum, da-da-dum (singing) “Come Back To Me.” And I went, (singing), and I gave it a more, it had a more dramatic quality.

“COME BACK TO ME” (John Cullum)

At the ASCAP memorial service for lyricist E. Y. Harburg, Burton Lane paid tribute to his longtime friend and collaborator.

Interview:
Lane: I loved writing songs with Yip. My tunes always sounded better dressed in his lyrics. A few years ago, Yip told me a title he had and it touched me, and then I wrote a melody and apparently it touched him, because he wrote one of the most beautiful lyrics, that I think will touch you. This was the last song we wrote together.

“WHERE HAVE I SEEN YOUR FACE BEFORE” (Burton Lane)

You’ve been listening to composer Burton Lane. Sound mixing by David Rapkin. Associate producer Jeff Lunden. Anything Goes – Backstage with Broadway’s Best - is produced and hosted by Paul Lazarus. For more information visit anythinggoespl.com. If you enjoyed this episode, be sure to rate and follow us. Thanks for listening.

Burton Lane, composer of such celebrated Broadway shows as FINIAN’S RAINBOW and ON A CLEAR DAY YOU CAN SEE FOREVER, along with songs for over thirty films including ROYAL WEDDING and BABES IN ARMS, discusses his career. He recounts his early songwriting efforts in Hollywood with Frank Loesser and Harold Adamson, Broadway collaborations with E.Y. “Yip” Harburg and Alan Jay Lerner, writing songs for Fred Astaire, and discovering a young Judy Garland when she was performing as part of The Gumm Sisters.

Featured songs: “Overture from FINIAN’S RAINBOW,” “Everything I Have Is Yours,” “How D’ya Like to Love Me?” “I Hear Music,” “The Lady’s In Love With You,” “How About You?” “Don’t Let It Get You Down,” “The World Is In My Arms,” “Old Devil Moon,” “Look to the Rainbow,” “When the Idle Poor Become the Idle Rich,” “How Could You Believe Me When I Said I Love You When You Know I’ve Been A Liar All My Life,” “Too Late Now,” “On A Clear Day (You Can See Forever,” “Come Back To Me,” and “Where Have I Seen Your Face Before.”