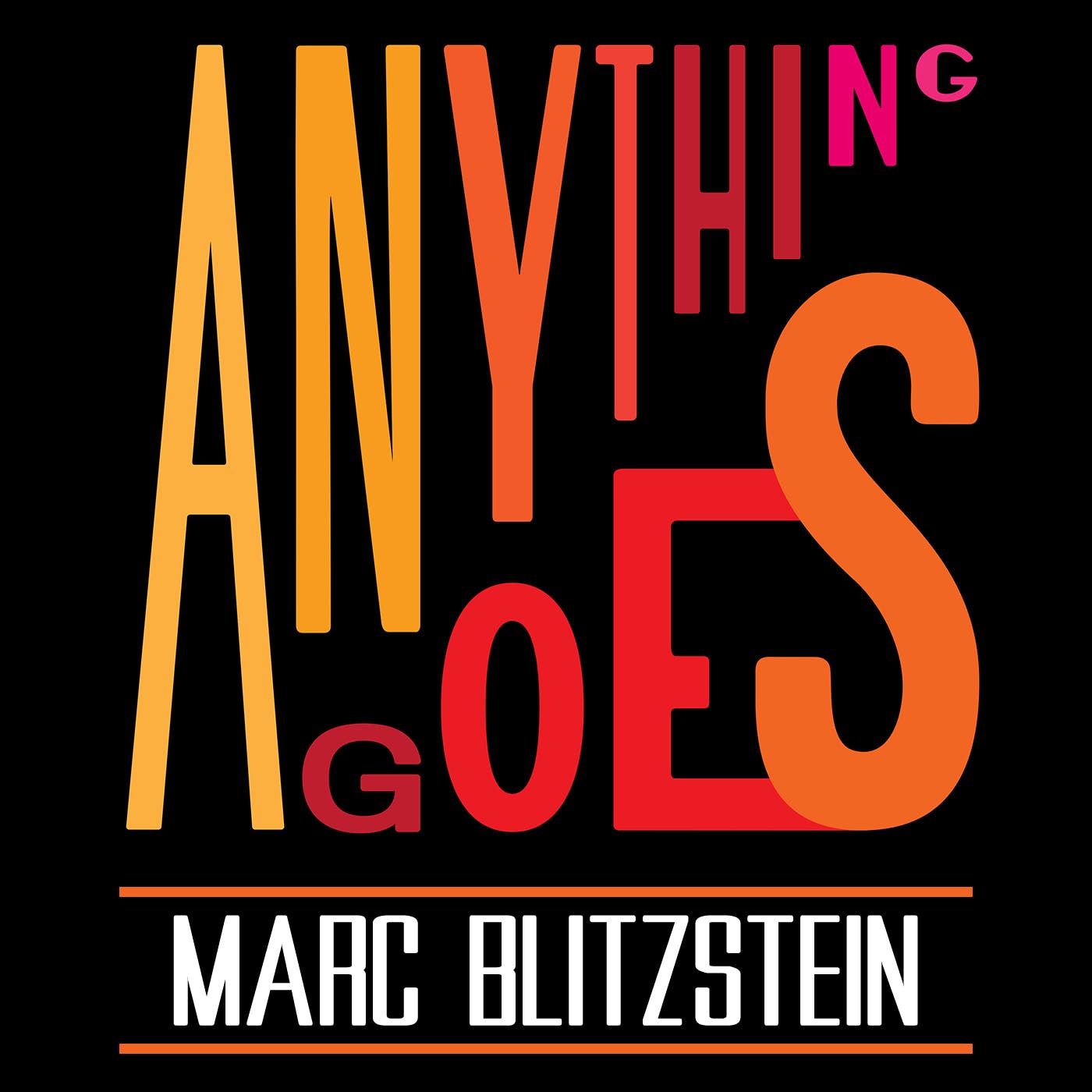 Hi, this is Paul Lazarus. In the 1980s, I produced and hosted a radio series called Anything Goes, a celebration of the American musical theater. Now, the Broadway Podcast Network is bringing back these shows. Today, the work of composer-lyricist Marc Blitzstein, who wrote the scores for THE CRADLE WILL ROCK, JUNO and REGINA and is perhaps best known for his translations of Brecht/Weill’s songs in THE THREEPENNY OPERA. This program was originally broadcast in 1986 and features Dr. Eric Gordon, an authority on Blitzstein.

This is ANYTHING GOES, a Celebration of the American Musical Theater--past present and future. I’m your host, Paul Lazarus. Today, the music and lyrics of Marc Blitzstein, an extraordinary American writer whose commitments to opera and social reform helped to re-shape musical theater. Here’s the finale from Blitzstein’s 1936 labor opera, THE CRADLE WILL ROCK.

On a recording he made for Spoken Arts Records, Marc Blitzstein described the difficulties of getting THE CRADLE WILL ROCK produced.

Spoken Arts Records:
Blitzstein: When I played THE CRADLE WILL ROCK for Orson Welles, he was just 21, but already an extravagantly brilliant and magnetic theater man. He fell in love straight off, and made me promise that no matter who should produce it, he would do the staging, and I was glad to agree. Many producers then toyed with the notion of putting it on. All of them dropped it. It was considered ‘hot stuff’ politically, since it dealt with the rising struggle for unionism in America, specifically in the steel industry, at a time when a combine known as Little Steel was all over the newspapers with its union problems. Finally, Welles and John Houseman decided to produce the work at the Maxine Elliott Theater under the auspices of the Federal Theater Project, which they had joined.

“NICKEL UNDER THE FOOT” (Patti Lupone)

Patti Lupone singing “Nickel Under the Foot,” accompanied by Michael Barrett. THE CRADLE WILL ROCK was to be presented by the Federal Theater Project, but government officials decided that this proletarian opera was too inflammatory. Shortly before the opening night performance, they ordered the theater to be padlocked. Actors and musicians were forbidden by their unions to appear on stage. Director Orson Welles saved the day, however, by putting on an impromptu opening night at another theater. The cast sang from their seats and Blitzstein himself played piano on stage.

Spoken Arts Records:
Blitzstein: I could hear an enormous buzz of talk in the theater, and when the curtains opened and I looked, I saw the place was jammed to the rafters. The side-aisles were lined with cameramen and reporters. And there was I, alone on a bare stage, perched before the naked piano in my shirtsleeves, it being a hot night. There on stage, I couldn’t know which or how many of our actors had elected to take Welles’ suggestion, or where they were in the audience. But I started, ready to do the whole show myself. I began singing the Moll’s first song of the play, and then I heard the words taken from my mouth by the Moll herself, seated in a right loge. “Well, she’s here anyway,” I thought thankfully.

THE CRADLE WILL ROCK was a great success, celebrated both as a work of art and as a political statement. It moved to Broadway, where it continued to be performed without scenery and orchestra. Speaking at Brandeis University in the early 60s, Marc Blitzstein identified the show as a turning point in his artistic career.

Brandeis Recording:
Blitzstein: I think my style gelled and crystallized with that work. It is a style which has something to do with popular material, and I don’t mean popular in the sense of the fashion or fad of this year or next, but what we’ve come to call “popular music,” it’s a misnomer. I’m against another misnomer: “serious music.” I think I use popular material for my actual nexus, and I build around it as thoroughly serious a technical complex as I can.

While serving in the armed forces, Blitzstein composed the AIRBORNE SYMPHONY, which was first conceived as a film score.

Dr. Eric Gordon, an authority on Blitzstein’s work, sees THE AIRBORNE SYMPHONY as an optimistic work, anticipating the end of war.

Interview:
Gordon: “His main project was working on this Airborne Symphony, and it was an ode to flight, really. To the whole history and theory of flight, concentrating on the growth of the awesome power of flight, symbolized by dropping bombs, leveling whole cities. In other words, he called attention to the great power that had been called into being, and the destructive power, and how with the awful but necessary fight against fascism that the Second World War represented, we would now come out of it mourning our dead, but not self-satisfied with our victory. That is that we should now apply that power to peaceful uses.”

“Ballad of the Bombardier” from THE AIRBORNE SYMPHONY is sung by a young flyer writing a letter home.

“BALLAD OF THE BOMBARDIER”

Blitzstein, according to Dr. Eric Gordon, had translated a few of the songs from THREEPENNY OPERA years before the show’s first American production in 1954.

Interview:
Gordon: Weill, before his death, knew of this translation and liked it. So Blitzstein resolved that, having done a couple of the songs and gotten Weill’s okay on them, after Weill’s death he would now proceed and do the whole thing, which he felt was a great 20th century work, but sadly unfamiliar to the English-speaking world.

At Brandeis, Blitzstein spoke about his music and his awareness of its audience.

Brandeis recording:
Blitzstein: I am not an inventor or an experimenter. I say this flatly: I don’t seem to insist on finding new ways to say things. I suppose I want to find an exact way to say the thing I wish to communicate. And I am still benighted enough to think of music as communication. I believe with all my being that without the consumer, and in music that means the listener, there is no creative art.

JUNO, Blitzstein’s musical drama based upon Sean O’Casey’s “Juno and the Paycock,” was unsuccessful in its original 1959 production, but the score contains some of his most lyrical work.

This is ANYTHING GOES with Paul Lazarus. Reviewing the musical theater career of Marc Blitzstein.

Spoken Arts Recording:
Blitzstein: My opera, REGINA, presented by Cheryl Crawford in New York in 1949, is based on Lillian Hellman’s “The Little Foxes,” and has to do with an Alabama family at the time of the rise of industrialism in the South. I think REGINA falls into a category known in France as opéra comique. All that means is a musical stagework which does not attempt the grand or noble level, and which is free to use speech or song as the occasion requires. Many musical plays produced on Broadway today would seem to fit in this class, but it’s a curious fact that REGINA itself has had a much bigger success in the opera house than in the straight theater.

Marc Blitzstein’s famous “Rain Quartet.” One of the most powerful moments in REGINA is the title character’s sung statement of her philosophy.

“THE BEST THING OF ALL”

Leonard Bernstein, like many others in the American musical theater, was profoundly affected by Marc Blitzstein’s work. In 1985, in a tribute to Blitzstein at Lincoln Center, Bernstein sang a little known song of Blitzstein’s called “Zipperfly.”

Lincoln Center Recording:
Bernstein: This song, Zipperfly, was not, as far as I know, written for any particular show or opera. It just leapt out of him one day in 1945. I call it a masterpiece because it’s the very essence, in its crazy, deeply quirky way, of Marc’s proletarian soul, of his communality with the suffering and ever-hopeful human race. It’s really a little musical soliloquy, in which a 14-year-old shoeshine boy – very poor, naturally – is saying his prayers before going to sleep.

You’ve been listening to the music and lyrics of Marc Blitzstein. Sound mixing by David Rapkin. Associate producer Jeff Lunden. Anything Goes – Backstage with Broadway’s Best – is produced and hosted by Paul Lazarus. For more information, visit AnythingGoesPL.com. If you enjoyed this episode, be sure to rate and follow us. Thanks for listening.

Marc Blitzstein, composer and lyricist noted for THE CRADLE WILL ROCK, THE AIRBORNE SYMPHONY, JUNO, and REGINA, discusses his life and work. He recalls the political controversy around THE CRADLE WILL ROCK, the challenges of bringing it to the stage with director Orson Welles and producer, John Houseman, and his translation/adaptation of Bertolt Brecht and Kurt Weill’s The THREEPENNY OPERA. Additional commentary by Dr. Eric Gordon, author of “Marc the Music, The Life and Work of Marc Blitzstein.”

Featured songs: “Finale from The Cradle Will Rock,” “Nickel Under The Foot,” “Moll’s Song,” “Ballad of Hurry Up,” “Ballad of the Bombardier,” “Mack the Knife,” “One Kind Word,” “Make A Quiet Day (Rain Quartet),” “The Best Thing of All,” and the rarely sung “Zipperfly” introduced and performed by Leonard Bernstein.