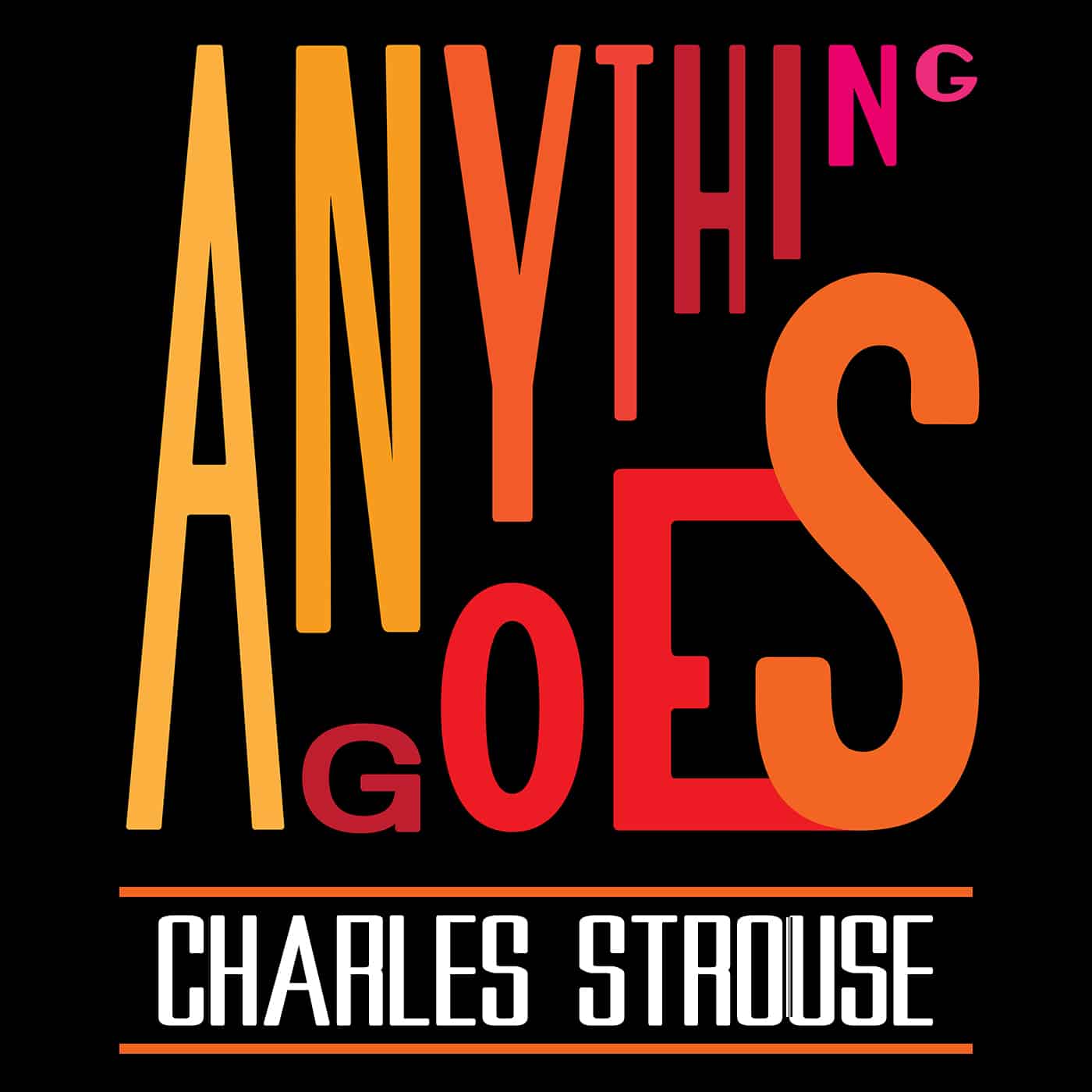 Hi, this is Paul Lazarus. In the 1980s, I produced and hosted a radio series called Anything Goes, a celebration of the American musical theater. Now, the Broadway Podcast Network is bringing back these shows. Today, the work of legendary composer and lyricist Charles Strouse, who wrote the music for such shows as ANNIE, APPLAUSE, GOLDEN BOY, and Broadway classic, BYE BYE BIRDIE. This program was originally broadcast in 1986.

This is ANYTHING GOES, a Celebration of the American Musical Theater--past present and future. I’m your host, Paul Lazarus. Today, a visit with Charles Strouse, composer of ANNIE, APPLAUSE, GOLDEN BOY, and BYE BYE BIRDIE.

Charles Strouse was educated as a composer at the Eastman School of Music and studied with Nadia Boulanger, but he was always drawn to popular music.

Interview:
Strouse: One of the things that always stayed with me about musicals was that they’re very sexy, they’re very glamourous, they’re very bright and dazzling and fast paced, and I was always glamourized by them. Although, as you know, I’ve tried to do serious musicals, a part of me is in love with the jazz part of musicals.

“A LOT OF LIVING TO DO” (Original Broadway Cast)

Interview:
Strouse: Dick and I used to go out and I said ‘Lee Adams and I are writing this show and I think there’s a terrific part in it for you’ and he was like ‘I’d like to see it someday,’ y’know when we all grow up it was that kind of thing. And then when we finally got the show on, no one would give, including myself I gotta admit in all honesty, no one would give Dick the part. He wasn’t a big name and we felt, I mean, Charles Strouse and Lee Adams, even Gower Champion, he directed a couple night club revues.

Interview:
Paul: What was the reaction out of town to BYE BYE BIRDIE?
Strouse: It was a smash right away. And it being your first show it was a numbing kind of thing, it’s as though somebody just called you on the phone and said you’ve just won 5 million dollars, you’d say thank you very much and put down the phone. And you’d say what is 5 million dollars, I’m not going to leave this apartment, I’m not going to change my life or anything, no. It was abstract. Lee, for instance, after the show opened on Broadway and we were making hundreds of thousands of dollars a year, Lee still insisted on keeping his old job.

Charles Strouse’s next show with Lee Adams was ALL AMERICAN, starring Ray Bolger. Its book was written by the then un-celebrated Mel Brooks.

Interview:
Strouse: It’s about a foreigner who comes to America who falls in love with America for all the wrong reasons, the very reasons that Americans themselves disparage. He loves all the vulgarity and all the college football teams. And as a matter of fact, he is a professor of engineering from a Slavic country and becomes the football coach. And I thought it was a very amusing book and really had something to say.

“WHAT A COUNTRY” (Ray Bolger)

“Once Upon a Time,” the best-remembered song from ALL AMERICAN, was an unexpected hit for Strouse. He and Lee Adams wrote it to replace a long book scene.

Interview:
Strouse: There was a romantic glow to the scene but it was basically about, I come from here and this is what I did in my life. And we wrote the song to kind of help with 8 pages of dialogue. The only person who thought it was going to be a hit song, oddly enough, was Tony Bennett who recorded it.

“ONCE UPON A TIME” (Ray Bolger)

Strouse at L&L: Before the current black theater craze, Lee and I wrote GOLDEN BOY. We had the nerve to think we could write a serious musical about people who loved one another, fought, did real life things, and just happened to be black. A little ahead of its time, maybe. It was not about blackness, it was about people. We worked on it for three years with Clifford Odets, who died the first week of our rehearsal, and then we were joined by Arthur Penn, Tony Walton, and of course Sammy Davis. We were five months on the road before coming to Broadway. Directors, writers, songs, scenes, all came and went. Lee and I estimate that we wrote well over 50 songs for the 16 that finally ended in New York. Anyway, GOLDEN BOY turned out to be a hit.

“I WANNA BE WITH YOU” (Sammy Davis)

Interview:
Strouse: At the Daily Planet she was the associate to the bad columnist who was played by Jack Cassidy, and she had a real crush on Cassidy, who spurned her and used her at every opportunity that he could to do her leg work. And she sings ‘You’ve Got Possibilities’ when one night Cassidy stands her up for a date and she has nowhere to go and nothing to do and she’s mad and she spies Clark Kent. It was quite funny, and Linda was wonderful in it.

This is ANTHING GOES with Paul Lazarus. Composer Charles Strouse began the 1970s with a huge success at the Palace Theater: APPLAUSE, starring Lauren Bacall. At the 92nd Street Y he described his good fortune.

92nd Street Y:
Strouse: It all seemed to come together here, a great star, Lauren Bacall, in an intensely dramatic moment Betty Comden and Adolph Green had fashioned from Joe Mankiewicz’s masterpiece, ALL ABOUT EVE, in which the star has just been sabotaged. Knifed in the back, her part given to someone else, her lover alienated. And of course, Lee’s exquisite lyric had perfect love-hate for the theater that only he could’ve captured.

“WELCOME TO THE THEATRE” (Lauren Bacall)

Strouse’s good fortune was increased in 1977 when ANNIE opened on Broadway. The book was written by Thomas Meehan, and the lyrics by Martin Charnin, who conceived and directed the show.

Interview:
Strouse: One day he called me said, ‘I’ve got the greatest idea,’ and I said ‘well tell me’. He said ‘no I can’t tell you, you gotta come over to my office,’ I said, “it can’t be that great,’ he said ‘it’s the greatest idea.’ And I went over there and he told me and he told me and I went ‘eugh.’ I really thought it was just about the silliest thing and y’know, Tom and I have often said to one another it was because of our reaction that the thing became such a hit. Because we were able to inject into it that disbelief, that cynicism about the very thing we were doing, in other words an adult tone.

Strouse had doubts about ANNIE’s most popular song, “Tomorrow.”

Interview:
Strouse: What’s ironic about it is it’s extremely range-y, particularly for little girls. And one of my silent fears, but one that I could not eliminate, was that at the very beginning of the show when little girls came in to audition for us, we would say ok now learn that song, nobody could sing it. They didn’t know where to go, they couldn’t reach the top notes and they couldn’t reach the bottom notes. And I really thought to myself, I’ve goofed up. Then suddenly, the show became a hit, we got the couple of girls who could sing the high D’s and then suddenly every girl in the world would sing it, it’s all psychological.

Composer Charles Strouse wrote his own lyrics for his most recent show: the Off-Broadway revue MAYOR, based on the memoirs of Mayor Edward Koch.

Interview:
Paul: Is that the story that Ed Koch himself asked you to adapt his best-selling book, Mayor, into a musical?
Strouse: Yes, that’s true. I knew Ed because he had used NYC as his theme song and we became friendly. And he called me when the book was on the top of the best-seller list, literally out of nowhere. I couldn’t have been more surprised. And he said he was thinking that it would make a musical. And he said it’s probably the dumbest idea, and I said I think it is a dumb idea. And he said well think about it, and I did think about it. I went so far to call a couple people and say what do you think about it, and they said it’s the worst idea I’ve ever heard, what with FIORELLO. But I ran across this writer, I think a wonderfully funny writer, Warren Leight, through a book of his called the “I Hate New York Guidebook.” And he has such an antic view of New York and he saw something, and we went to work on it.

Interview:
Strouse: I found a pleasure for the first time in my life, a pure pleasure, in simply doing it all my own way. It liberated me in a way I never understood. But the freedom of being able to say, “it’s my note, I don’t care what, instead of saying go out the door, I’m gonna be able to say please go out the door my darling” because I have a melody that goes da-da-da-da-da. And it’s just like a river that wound its way across a path that was not pre-planned. And I’ve loved it, and I’m more or less determined I’m gonna do all my own shows, all my own lyrics from now on.

“THE EMPEROR IS A MAN” (Susannah Fellows)

You’ve been listening to the music and lyrics of Charles Strouse. Sound mixing by David Rapkin, Associate producer Jeff Lunden. Anything Goes – Backstage with Broadway’s Best – is produced and hosted by Paul Lazarus. For more information, visit AnythingGoesPL.com. If you enjoyed this episode, be sure to rate and follow us. Thanks for listening.

Charles Strouse, legendary composer of ANNIE, APPLAUSE, GOLDEN BOY, and BYE BYE BIRDIE, recounts his illustrious career. He recalls his work with lyricist Lee Adams and iconic stars like Dick Van Dyke, Mel Brooks, Lauren Bacall, Ray Bolger, and Sammy Davis Jr. Strouse also discusses lesser-known works like IT’S A BIRD, IT’S A PLANE, IT’S SUPERMAN, the Off-Broadway revue MAYOR, and his lyrics for NIGHTINGALE. Featured songs: “Put On A Happy Face,” “Those Were The Days,” “Hymn for A Sunday Evening (Ed Sullivan),” “Applause,” “Tomorrow,” “A Lot of Living To Do,” “Telephone Hour,” “What A Country,” “Once Upon A Time,” “I Wanna Be With You,” “You’ve Got Possibilities,” “Welcome to the Theatre,” “The Overture from ANNIE,” “Hard-Knock Life,” “NYC,” “I’m the Mayor,” and “The Emperor Is A Man.”