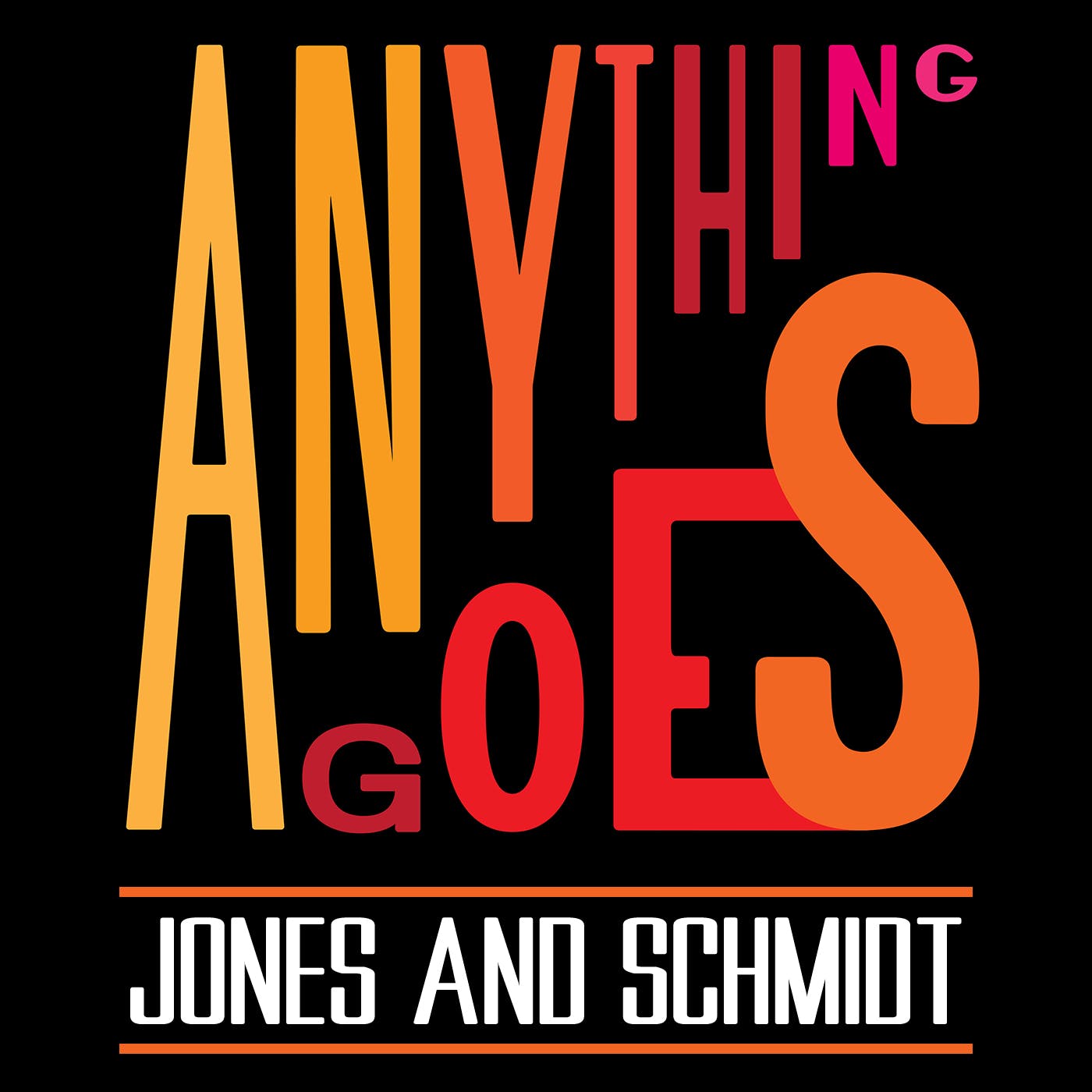 Hi, this is Paul Lazarus. In the 1980s, I produced and hosted a radio series called Anything Goes, a celebration of the American musical theater. Now, the Broadway Podcast Network is bringing back these shows. Today, the work of longtime partners Tom Jones and Harvey Schmidt, who created such shows as I DO! I DO!, 110 IN THE SHADE, and of course, THE FANTASTICKS. In the 80s, Jones and Schmidt came to my apartment and recorded several of their own songs.

This is ANYTHING GOES, a Celebration of the American Musical Theater—past, present, and future. I’m your host, Paul Lazarus. Today my guests are Tom Jones and Harvey Schmidt, authors of THE FANTASTICKS, the Off-Broadway musical which has been playing in New York for more than a quarter of a century.

Interview
Schmidt: It was really at college when the first LPs started coming out – that’s ’48 and ‘49 – KISS ME KATE and SOUTH PACIFIC. Those just like opened the doors to me. And one of the very early ones was ON THE TOWN too. I couldn’t believe suddenly there was this whole other world of exciting music and so I sort of lost interest at the time in symphonic and classical music, which had been my big love until then. And then I just started going berserk over show music, I started reading books about it and getting more and more into the history of it and the past. It was like a whole new world opening up suddenly, through LPs.

Lyricist Tom Jones was involved in theater as an actor and director at the University of Texas before he began to write musicals.

Interview
Jones: I had no intention whatsoever of being a writer and certainly not a musical writer. Again, it was one of those things – Harvey and I did one of those youthful indiscretions called a college musical and doors opened, bells rang, people laughed and applauded, which is ultimately all I wanted out of the experience of the theater anyway, was approval. Obvious signs of love and approval, that’s what I wanted.

“I CAN SEE IT” (Ralph Bruneau and George Lee Andrews)

Ralph Bruneau and George Lee Andrews, two of the many talented performers who have appeared in THE FANTASTICKS over the years.

Tom Jones and Harvey Schmidt followed the great Off-Broadway success of THE FANTASTICKS with their first Broadway show. It was 110 IN THE SHADE, an adaptation of N. Richard Nash’s play, THE RAINMAKER.

110 IN THE SHADE had its share of problems in its Boston tryout. One of the solutions was a new Jones and Schmidt song, “A Man And A Woman.”

Interview
Schmidt: The instant it went in, everybody loved it, the audience loved it. It’s curious how those things can work like that. And that’s why you go out of town. But it was absolutely wacky the night we put that – because we wrote it so quickly, I remember we wrote it in like one day at the Ritz Hotel. We put it in that night. During this time Hershey Kay was out orchestrating and instantly – it was all just like instant songwriting. And it was so new that they couldn’t learn the lyrics so we had the assistant stage manager standing in the pit holding a huge cue card that said “A Man and a Woman.”

“A MAN AND A WOMAN” (Inga Swenson and Stephen Douglass)

“A Man and a Woman” from 110 IN THE SHADE, sung by Inga Swenson and Stephen Douglass. Another dramatic highlight from this 1963 score was “Wonderful Music” sung by Swenson, Douglass, and Robert Horton.

Live event
Jones: After that show, 110 IN THE SHADE, Harvey went over to Italy and took a house for a year, and my wife and I went over and visited with him, to stay there, and I was going to do some work. And it was kind of a peculiar situation, because at that time, as opposed to now, none of us spoke a word of Italian. Now we speak 6 or 8 words. But, we didn’t speak anything at that time, and nobody in that village spoke a word of English. After we had been there about 6 weeks, the telephone rang, and we were surprised. The whole week, it had never rang before the whole time. And we looked at it, and we didn’t know what you said in it. So we picked it up, and it wasn’t Italian at all. But it was all the way across the Mediterranean Sea, the Atlantic Ocean, all the way from New York. And it was Gower Champion calling. And he said, “boys, what about a musical version of THE FOURPOSTER?” And we thought, what a really terrible idea. A two-character musical. And he said “wait a minute. What about a musical version of THE FOURPOSTER, produced by David Merrick, directed by Gower Champion, starring Mary Martin and Robert Preston?” And we thought it began to sound better, you know? But for one thing, we just couldn’t resist it because it made such a great poster, for one thing.

The biggest hit song from I DO! I DO! was almost cut from the show. It was “My Cup Runneth Over,” which was made famous by Ed Ames’ recording.

Interview:
Jones: It was written exactly in the way that Ed Ames sang it, which was that the long held note on “love,” you know, which was, we figured, the signature and the distinctive thing about the song. Well that was hard for Mary and Bob to sustain, particularly in an evening where they were doing it on stage, two and a half hours.
Schmidt: And also, as it came out of the staging, it was a quiet moment. And it seemed pretentious to stand there holding...
Jones: And also, I mean, Bob Preston is a wonderful singer/actor, but he’s not like a long-line ballad person who’s gonna stand there and hold a note for those many bars. That’s not natural or comfortable to him. So since that seemed to be the distinctive thing about the song, but we all agreed, “well, we’ll just have to let it go.” And then Mary came, and she said, “you know, that is such a sweet little song.” She said, “why don’t we just do it, and not hold that note so long?” So that’s what, in fact, they did on stage, and Gower says, “well, let me see. I don’t know, I’m not sure, it doesn’t pay off” but he says, “if we don’t go for applause at the end of it, in the scene where she’s very pregnant.” So, they did the song, and he staged it in a nice, simple way, and the last time she sings “my cup runneth over with - (gasp)” and she grabs her stomach and he says “oh my god, oh my god, is it ready?” He starts getting ready. So, they don’t go for applause. It was ironic then. Unexpectedly, the Ed Ames thing came out, and unexpectedly, it was this huge hit.

This is Anything Goes with Paul Lazarus. In the late 60s, Tom Jones and Harvey Schmidt established Portfolio Productions, their own theater workshop where they could try out experimental shows.

Interview:
Jones: We had always had this dream of having a small theater environment of our own to work in. We wanted to experiment. We wanted to do some original musicals, which we really hadn’t ever done. Plus, I think we wanted to direct ourselves. We wanted to design. The auteur theory, you know? It’s called egomania, is what the thing is called. It’s justly punished by the gods. If not now, later. If not later, now. In time it is always – the Greek hubris, and it brought nemesis. So, we had a little hubris up there, and we got a little nemesis.

One of the musicals they worked on at Portfolio was CELEBRATION, which they’ve always regarded as their most personal work.

The 26-year run of THE FANTASTICKS is a musical theater phenomenon. But when Jones and Schmidt were first working on it, the show seemed anything but phenomenal.

Interview:
Schmidt: We were getting nowhere with this thing. It was so huge, and just collapsing under its own weight.
Jones: And it was heavy, too. It was pretty serious, a lot of serious elements.
Schmidt: We decided to throw all that out and just do it as light, in as simple a way as we could. We did a total reversal on it, and wrote in those two weeks, mostly the bulk of what is now in the first act of THE FANTASTICKS. And so, we put it on. That’s where Lore Noto saw it, and then commissioned us to turn it into two acts, which we fought then, after having finally thrown out all this stuff. And then as a one-act, we thought “god, no. We don’t want to do it as two acts.” We wanted to do a revue with the first act, and of course that probably wouldn’t have run, I mean, not to the extent that it has today.

THE FANTASTICKS was based on a French play, LES ROMANTIQUE, by Edmond Rostand.

Interview:
Jones: It’s very loosely based upon it. I mean, there’s no narrator in that, and there’s no old actors, and the point of it is in fact quite different. In fact, it’s the opposite point, really. The end of the Rostand play, she comes forward, Silvette or whatever her name is, and says, “you know, let’s do away with, let’s have a world of gossamer, and let’s do away with realistic things and have a world of dreams.” It was part of the romantic movement in France, really.

“THEY WERE YOU” (Craig Carnelia and Carolyn Mignini)

Craig Carnelia and Carolyn Mignini, who played the boy and the girl at the Sullivan Street Playhouse in 1969, singing “They Were You.” The long process of trial and error that led to the creation of THE FANTASTICKS began, strangely enough, with an idea that anticipated WEST SIDE STORY.

Live Event:
Jones: When Harvey and I first arrived in New York, we were working on a book musical based on Romeo and Juliet, sort of a spin-off, only our book musical, the situation was the boy was Anglo, and the girl was Spanish. And the girl’s name was Maria. We even had a song called “Maria,” which we subsequently abandoned. But to open that musical, there was a song by a sort of bandit narrator who came out and, in a presentational way, invited the audience, invoked them to participate in the spirit of the evening.

“COME ON ALONG WITH ME” (Harvey Schmidt)

Live Event:
Jones: Well, that song was alright, I suppose, but it had some elements that we found questionable, particularly that I found questionable lyrically, that is to say “back beyond the smart of you, to that special childlike part of you.” It began to sound like a children’s radio program. So, we decided to try another version of the same follow-type song, and this is that version.

The rest, as they say, is musical theater history.

You’ve been listening to collaborators Tom Jones & Harvey Schmidt. Sound mixing by David Rapkin. Associate producer Jeff Lunden. Anything Goes – Backstage with Broadway’s Best – is produced and hosted by Paul Lazarus. For more information, visit AnythingGoesPL.com. If you enjoyed this episode, be sure to rate and follow us. Thanks for listening.

Lyricist and bookwriter Tom Jones and composer Harvey Schmidt discuss their musical theatre collaborations, including their work on the long-running classic THE FANTASTICKS. Jones and Schmidt recount their early days and their collaborations on other shows such as 110 IN THE SHADE, I DO! I DO! and CELEBRATION. They also sing some of their own songs from THE FANTASTICKS.