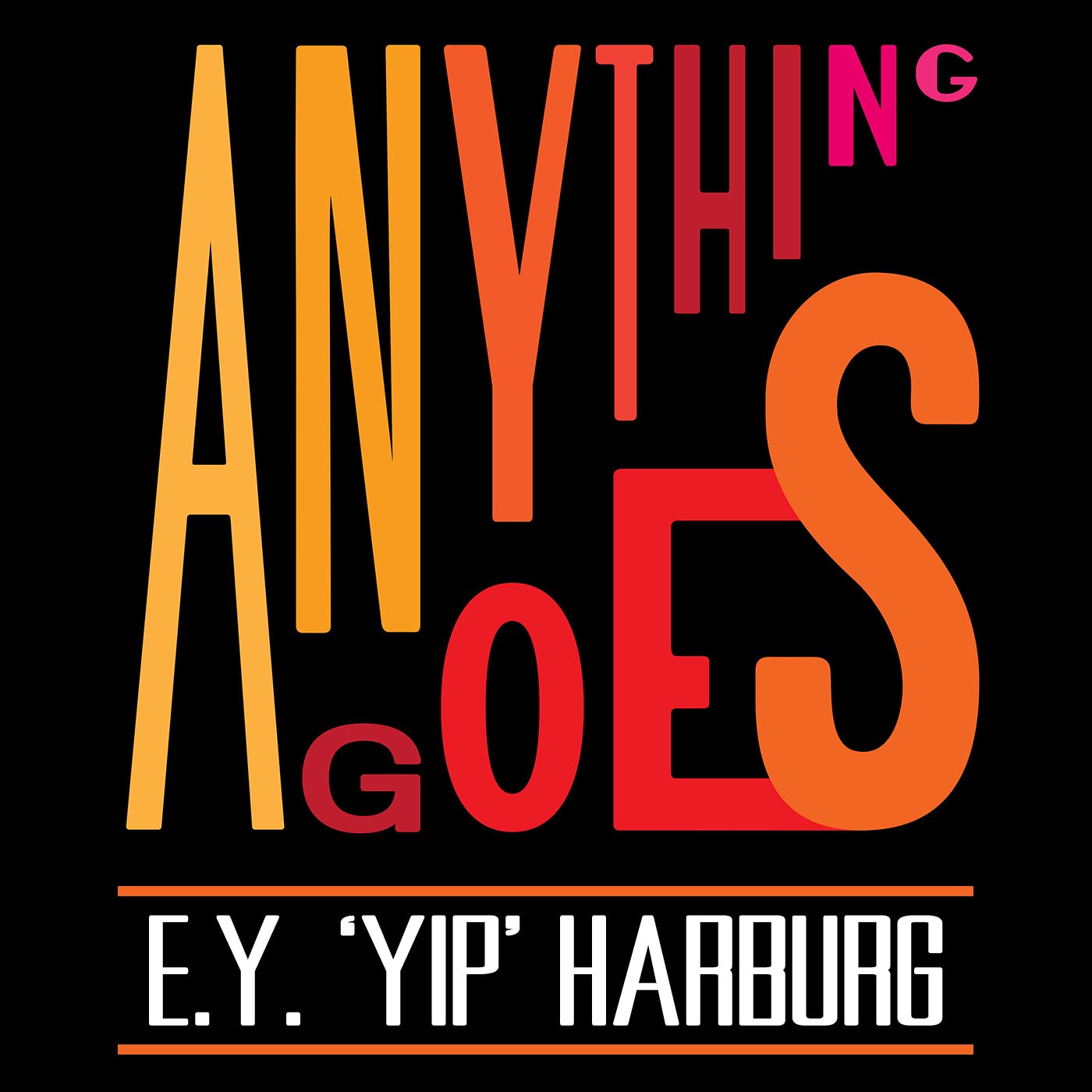 Hi, this is Paul Lazarus. In the 1980s, I produced and hosted a radio series called Anything Goes, a celebration of the American musical theater. Now, the Broadway Podcast Network is bringing back these shows. Today, a visit with legendary writer E. Y. “Yip” Harburg, who was known as Broadway’s social conscience. Harburg is best known for BROTHER, CAN YOU SPARE A DIME and his masterwork OVER THE RAINBOW. This program was originally broadcast in 1983.

This is ANYTHING GOES, a Celebration of the American Musical Theater--past present and future. I’m your host, Paul Lazarus. Today, the lyrics of Broadway’s master of whimsey, the late E. Y. “Yip” Harburg. We’ll hear songs he wrote for FINIAN’S RAINBOW, BLOOMER GIRL, JAMAICA, and THE WIZARD OF OZ. And we’ll hear E.Y. Harburg himself talking about his 50-year career as a lyricist.

Yip Harburg’s lyrics are famous for their distinctive wit and wordplay.

Interview:
Harburg: I think I have a penchant for playing with words and redirecting them, especially if I have characters that are appropriate for that kind of thing. For example, when I’m dealing with fairy-land people, pixies, like leprechauns and people in Oz, then I have a right to do that, you see. After all, what is lyric writing? Lyric writing is word-game, isn’t it?

Paul: How did those occur to you? I can’t imagine, they’re so wonderful.

Harburg: Oh I don’t know, I just think that language is the most playful thing there is, and if you can’t play with language, if you’re a lyric writer…

“SOMETHING SORT OF GRANDISH” (David Wayne)

Interview:
Harburg: James Joyce did in a serious way – almost got a world reputation, didn’t he? – for taking words and mixing them up, putting them together, and whether you know it or not, you have an identification with these words in a much more imaginative and exciting way than you do with real words. Now take, for example, “Glocca Morra.” “How Are Things in Glocca Morra.” Why is that so interesting to people? Glocca Morra. If I said Cleveland you wouldn’t care about it. But “Glocca Morra,” whether you know it or not, I combine Glück, Glocca, which is luck, with Morra, which is tomorrow, Morgen. It’s a subliminal identification with lucky tomorrow.

“HOW ARE THINGS IN GLOCCA MORRA” (Ella Logan)

Interview:
Harburg: We live in a world that should be full of pixified fun, you know, flowers, buds… And we make such heavy, pompous materials to live by and with. And I think psychologically it’s my way of laughing at people who are serious and pompous and not seeing the playfulness of life, and doing it through language. It’s taking life and keeping it on a childish level, and kind of laughing at all the grown-ups who think that it’s a serious proposition, and that they got to work at it, not only with heavy machinery, but with guns and with bombs and they kill each other for it, when it should be playful and lighthearted.

When he spoke to an audience at the 92nd Street Y in New York, Harburg described how he wrote the song, “When I’m Not Near The Girl I Love” for FINIAN’S RAINBOW.

92 Y:
Harburg: Another situation in FINIAN called for a rather unique song. A leprechaun, Og, is rapidly growing human, and has just reached that danger point of his evolvement where is at the complete mercy of that old devil, sex. He sees Sharon, he falls in love with her. He swears “this is it, forever.” And the next day he meets Susan, and he gets the same eternal feeling. He’s bewildered. He’s guilty. Conflicted. Write a song for him. Well, this was an easy one for me, because having been a leprechaun before I was a lyricist, I knew just what he was going to say.

“WHEN I’M NOT NEAR THE GIRL I LOVE” (David Wayne)

92Y:
Harburg: Implicit sometimes in satire is a sense of prophecy. To sense the future in the instant. The instinct to see a little ahead of your time is what gives the satirist the funny point of view on the present. And so this next song, which was written for THE FOLLIES OF 1934, happens to accommodate the youth of today, who have reduced the English language to two phrases and a catch-all adverb: “like.” “I mean, like, when the producer says to the lyricist, he should, you know, like, I mean, uh… write a song, like, it should, you know, like, communicate the lack of communication.” So here is a song that does that.

In 1934, Harburg wrote the show LIFE BEGINS AT 8:40 with Harold Arlen and a friend since high school days, Ira Gershwin.

Interview:
Harburg: That was real collaboration, and it was exciting and playful and joyous and a beautiful show. It was a score I was very proud of, and Ira and I worked together beautifully. We had lots of fun.
Paul: Did you really write the songs together?
Harburg: Yes. We got together every night, at 9 o’clock or 10 o’clock, and worked ‘til 4 o’clock in the morning, with Harold at the piano, and it was just joyous.
Paul: I really like those songs, I mean “You’re A Builder Upper” and all that.
Harburg: What was great about that was that George was busy writing PORGY AND BESS, and he had a penthouse across the street on 72nd Street. Ira lived on the north side of the street, George lived on the south. So we would get together, and George would play us what he was doing on PORGY AND BESS and we would play him what we were doing on LIFE BEGINS AT 8:40.
Paul: That must have been a really good time.
Harburg: They were glorious days, glorious days.

This is ANYTHING GOES with Paul Lazarus, featuring the lyrics of “Yip” Harburg.

“SOMEWHERE OVER THE RAINBOW” (Judy Garland)

One of the great things about the score Harburg wrote with Harold Arlen for THE WIZARD OF OZ is that it gave free reign to his whimsical side. Lines like “I’d unravel every riddle for every individdle” and rhyming “prowess” with “mowess” revealed Harburg at his most fanciful.

Harburg’s lyric to “If I Were King of the Forest” was custom-tailored for the unique comic talents of Burt Lahr.

Interview:
Harburg: You see when you have a fellow like Bert Lahr, you’re unlimited in your inspiration and your imagination and your ideas for fun, because you’ve got a master who can take your lyrics and wing them into laughter.

“IF I WERE KING OF THE FOREST” (Bert Lahr)

Interview:
Harburg: I am always very disappointed when I see the picture though, because they deleted several songs at the end of the picture, and they made it a chase, and I feel the loss of music there, and they should not have done that. One was the jitterbug song, when the jitterbugs come down. She sends out a flock of bees, or bugs, you know, to bug them, to sting them, and they all get the jitters. (Starts singing “The Jitterbug”)

92Y:
Harburg: I think every writer has some theme that runs through everything he does. I think you can recognize it in Shaw, you can recognize it in Gilbert, you can recognize it in some of our lyric writers like Cole Porter and Gershwin. I think what moves me, of course I’m very conscious of social injustice, and the use of satire and humor as a weapon against these follies and foibles. But I suppose like everybody else, we all go around trying to find out who we are. I think we all want to know how we’re related to the universe and how we are related to people. And when my little guru book doesn’t tell me, I sometimes go up the Empire State and look at the stars and see how I’m related to the universe. Well, I can’t reach those stars. So I go down, then I try to see how I’m related to people, and there are too many people, there are too many stars. So, I go home. No one’s at home, and my thesaurus is gone, so I tiptoe into that bedroom, where the lady of the thesaurus usually has it, and I find her in bed, asleep, with her arms folded over George Bernard Shaw, and her face is usually one that makes me feel that behind those eyelids are the stars that I finally can touch, and behind those eyes are always the people I couldn’t reach but now I can touch. And I think it’s summed up in this song.

You’ve been listening to the “Master of Whimsy,” lyricist “Yip” Harburg.

Sound mixing by David Rapkin. Associate producer Jeff Lunden. Anything Goes – Backstage with Broadway’s Best – is produced and hosted by Paul Lazarus. For more information, visit AnythingGoesPL.com. If you enjoyed this episode, be sure to rate and follow us. Thanks for listening.

E.Y. “Yip” Harburg, renowned lyricist and book writer for Broadway and film, the writer behind such iconic works as FINIAN’S RAINBOW, JAMAICA, and the film musical, THE WIZARD OF OZ, recounts his illustrious career. Known as the “Master of Whimsy” and “Broadway’s Social Conscience,” Harburg who gave us “Brother, Can You Spare a Dime” among hundreds of other well-known songs, describes his lyric writing process, the way he tailors songs to particular performers, and even sings some of his own works, including a cut song from THE WIZARD OF OZ.

Featured songs: “Napoleon,” “The Springtime Cometh,” “Evelina,” “Never Trust A Virgin,” “Sunday in Cicero Falls,” “Down With Love,” “Something Sort of Grandish,” “How Are Things In Glocca Morra,” “Jamaica,” “When I’m Not Near The Girl I Love,” “I Like The Likes Of You,” “You’re A Builder Upper,” “Somewhere Over The Rainbow,” “If I Only Had A Brain,” “If I Were King Of The Forest,” “The Jitterbug,” “Lydia The Tattooed Lady,” and “It’s Only A Paper Moon.”