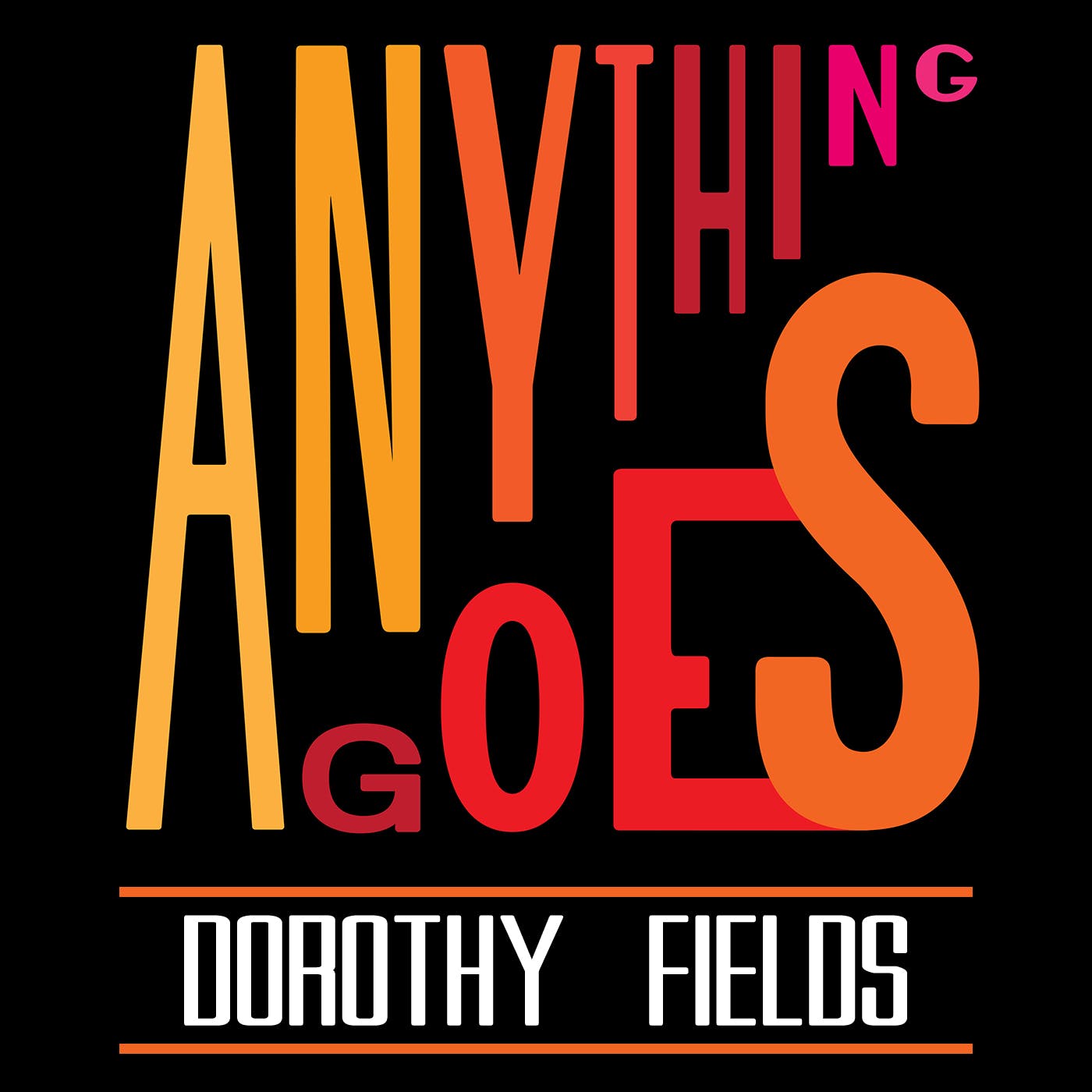 Hi, this is Paul Lazarus. In the 1980s, I produced and hosted a radio series called Anything Goes, a celebration of the American musical theater. Now, the Broadway Podcast Network is bringing back these shows. Today, a look at the work of master writer Dorothy Fields, who gave us such remarkable songs as “On The Sunny Side Of The Street,” and “I Can’t Give You Anything But Love,” as well as the Broadway classic SWEET CHARITY. This program was originally broadcast in 1985.

This is ANYTHING GOES, a celebration of the American musical theater – past, present, and future. I'm your host, Paul Lazarus. Today, a look at the career of the late Dorothy Fields, who wrote the lyrics to many of the greatest show tunes of this century.

Dorothy Fields was the daughter of Lou Fields, one half of the famous vaudeville comedy team of Weber and Fields. In spite of this theatrical heritage, her 47-year career in musical theater was almost nipped in the bud by her mother, as she explained in a program at New York's 92nd Street Y.

92 Y:
Fields: My mother didn't want any of us in the theater. On-stage or off-stage. Mom had had enough of it through the 50 or more years of pop’s acting and producing and aggravation. Ours was not a theatrical household. Mother was supposed to have remarked “you children must be extra polite to strangers because your father's an actor.” True. So three out of four of us landed in the theater.

92 Y:
Fields: We finally wound up at Mills Music. We played what we had and Jimmy McHugh, their professional manager and composer of many pops songs, listened. He listened, period. Now Mills Music was a fast-working firm. In 1921, when Enrico Caruso died, overnight they had a song, “They Needed A Songbird In Heaven, So God Took Caruso Away.” Then, a few years later, they needed a new star in heaven so God took Rudolph Valentino away. Well, 1924 I think it was, they figured that since Ruth Elder was going to fly the Atlantic, what else, a song! Irving Mills decided to give me a chance. What could they lose for fifty dollars? Mr. Mills said “I'll give you the first two lines of the chorus and we'll call it ‘Our American Girl.’” These were the two lines: “you took a notion to fly ‘cross the ocean.” I said timidly, but with great conviction, “Mister Mills, you don't take a notion to fly ‘cross the ocean.” But I wrote it overnight anyway. Ruth Elder never made it and neither did my first hit song. Well the Mills Music Company couldn't get rid of me. I became their fifty-dollar-a-night girl. For fifty dollars they got one hundred words. It was traditional then to write for some famous instrumentals. I wrote lyrics to Ruby Bloom’s “Soliloquy” and Reginald Forsythe’s “Serenade To A Wealthy Widow” – my first hundred bucks. Jimmy McHugh wanted to see what I could do with a contemporary song. The dance craze was on. We had the Varsity Drag, the Charleston and the Bamboline, et cetera, et cetera, so we wrote one called “Collegiana.” Now hear this. It's about college, of course.

92 Y:
Fields: And so on. I think the pedagogue, bed-agogue rhyme got Jimmy. Nothing seemed more difficult to me than writing a popular song. Now a song that becomes popular is another bag of words and it was a long time before I earned the luxury of writing for films or plays, where there’s a storyline and characters to write for and songs to progress that story. Lew Leslie planned to produce a revue on 42nd Street, BLACKBIRDS OF 1928. Harlem had gone downtown and we went with it. BLACKBIRDS got execrable reviews. One critic said, among other unflattering things, there was a sickening, puerile song called “I Can't Give You Anything But Love.” My father said, again, “now would you get out of showbusiness?” BLACKBIRDS ran for two years.

“I CAN’T GIVE YOU ANYTHING BUT LOVE” (Ethel Waters)

Ethel Waters singing Dorothy Fields’ and Jimmy McHugh’s “I Can't Give You Anything But Love” from BLACKBIRDS OF 1928.

92 Y:
Fields: I seemed destined to write revues. It's tough. You start from scratch twelve or fourteen times and maybe that's good. If you can write extraneous songs, writing for a book show would be absolute heaven. I wasn't to get to heaven for a while yet. Another for Lew Leslie, the INTERNATIONAL REVUE, which starred Gertrude Lawrence, Harry Richman, and Jack Pearl. That was in 1929. Remember? Wall Street, the stock market? Ayayay. We wrote a number for Jack Pearl called “The Margineers.” I don't remember any of it except the first line which went, “since they brought the Wailing Wall down to Wall Street.” Got a lot of bitter laughs from the audience. But then, for a little bit of optimism, Harry Richman sang:

“ON THE SUNNY SIDE OF THE STREET” (Dorothy Fields)

Fields and McHugh wrote another standard for the 1935 film EVERY NIGHT AT EIGHT.

“I’M IN THE MOOD FOR LOVE” (Frances Langford)

Dorothy Fields acquired a new collaborator in Hollywood, composer Jerome Kern. Together they wrote some of the most memorable songs of the 1930s.

92 Y:
Fields: It was in 1936 that Kern and I wrote what I feel was our best effort together: SWING TIME starring Fred Astaire and Ginger Rogers. It was a situation that called for a song which Jerry loved to describe as a sarcastic love ballad. For one of the two times in our entire collaboration, I wrote the lyric first.

92 Y:
Fields: I came back to New York in 1938 to work with Arthur Schwartz on STARS IN YOUR EYES. In the cast were Ethel Merman, Jimmy Durante, Mildred Natwick, and Jerry Robbins was in the chorus. Writing with Arthur Schwartz, whom I knew very well, was a complete change of pace for me at that time. When you write for Ethel Merman or Jimmy Durante you just ain't writing the kind of lyric you had to write for Grace Moore.

This is Anything Goes with Paul Lazarus. In the 1940s, Dorothy Fields and her brother Herbert began working together as musical book writers, producing such successes as LET'S FACE IT, SOMETHING FOR THE BOYS, and ANNIE GET YOUR GUN. For ARMS AND THE GIRL, a 1950 musical with Pearl Bailey, Fields wrote lyrics to Morton Gould’s music, and collaborated on the book as well.

“THERE MUST BE SOMETHIN’ BETTER THAN LOVE” (Pearl Bailey)

Fields’ next Broadway assignment was A TREE GROWS IN BROOKLYN, which reunited her with composer Arthur Schwartz.

92 Y:
Fields: The prospect of working with Arthur Schwartz again? Pure delight. Shirley Booth as the irrepressible, over-affectionate, slightly blousy Aunt Cissy is a superb piece of casting. Her timing was perfect. Her Brooklynese speech was perfect. Whenever there was a laugh to be got from a line, brother, she got it.

“HE HAD REFINEMENT” (Shirley Booth)

92 Y:
Fields: The words for the show were made to be simple. No tricky lyrical tries. Our people from Brooklyn wouldn't conceivably sing the sophisticated Cole Porter things, but they could have done wonders by the kind of songs and lyrics that Frank Loesser wrote for GUYS AND DOLLS. The characters told me what I should write, I didn't tell them.

92 Y:
Fields: Over a period of 47 years I’ve had a smashing time working with a round dozen composers. Here or gone from us, I salute them with gratitude and deep affection. They were Jimmy McHugh, Jerome Kern, Fritz Kreisler, Oscar Levant, Harry Warren, Harold Arlen, Burton Lane, Arthur Schwartz, Sigmund Romberg, Morton Gould, Albert Hague, and Cy Coleman. Cy, number twelve, there are a few things I’ve got to say about him. His enthusiasm, his ability to compose, imaginatively, easily, enabled me to do something I had never done before: to sit down with him at the piano and write both music and lyrics. We did it together, right there, in one exciting afternoon. “Big Spender,” it was. The Coleman magic got this old gal to write the kind of contemporary words that settled so well in Doc, as we called him, Simon’s book.

Composer Cy Coleman, who wrote the score for SWEET CHARITY with Fields, discovered that he and his new lyricist had a basic temperamental difference.

Interview:
Coleman: Dorothy Fields and I had one big problem: Dorothy is an early riser and I’m not. And she couldn’t understand why I was still in bed at 8 o’clock. And she didn’t want to understand. And I would get very testy about it because she’d call me up and she’d say, at 8:30 or something like that, having waited since 7, looking at the phone – and I find that people who get up very early in the morning look at the phone and wonder when it will be alright to call – but she’d call me up at 8:30 and she’d have this tone that used to drive me absolutely crazy. She’d say “are you still in bed?” And I’d say “Dorothy, it’s bad enough to be woken up, but to have that imperious tone telling me that it’s wrong for me to be in bed. It’s more than I can bear-” (laughs)

“IF MY FRIENDS COULD SEE ME NOW” (Gwen Verdon)

92 Y:
Fields: A song just doesn’t come on. I’ve always had to tease it out, squeeze it out, and anyone that tells you that a song is something that’s an inspiration – I hate that word – or a magic spark, or an IBM machine gets you going, it’s got to prove that one to me. It’s hard slave labor. Ask anyone who writes – it’s slave labor and I love it.

“IF MY FRIENDS COULD SEE ME NOW” (Gwen Verdon)

You’ve been listening to the incomparable Dorothy Fields.

Sound mixing by David Rapkin. Associate producer Jeff Lunden. Anything Goes – Backstage with Broadway’s Best – is produced and hosted by Paul Lazarus. For more information, visit AnythingGoesPL.com. If you enjoyed this episode, be sure to rate and follow us. Thanks for listening.

Dorothy Fields, daughter of comedy star, Lew Fields, lyricist and librettist of such stage classics as A TREE GROWS IN BROOKLYN, SWEET CHARITY and ANNIE GET YOUR GUN, along with numerous memorable films such as the Fred Astaire/Ginger Rogers SWING TIME and ROBERTA, discusses her life and career. She recounts growing up in a theatrical household, breaking through in the Broadway of the 1920’s, and her collaborations with many legendary composers, including Jimmy McHugh, Jerome Kern, Fritz Kreisler, Oscar Levant, Harry Warren, Harold Arlen, Burton Lane, Arthur Schwartz, and Cy Coleman.

Featured songs: “On The Sunny Side Of The Street,” “I Can’t Give You Anything But Love,” “A Fine Romance,” “I’m In The Mood For Love,” “Make The Man Love Me,” “If My Friends Could See Me Now,” “Diga Diga Doo,” “Collegiana,” “It’s All Yours,” “There Must Be Something Better Than Love,” “He Had Refinement,” and “Big Spender.”