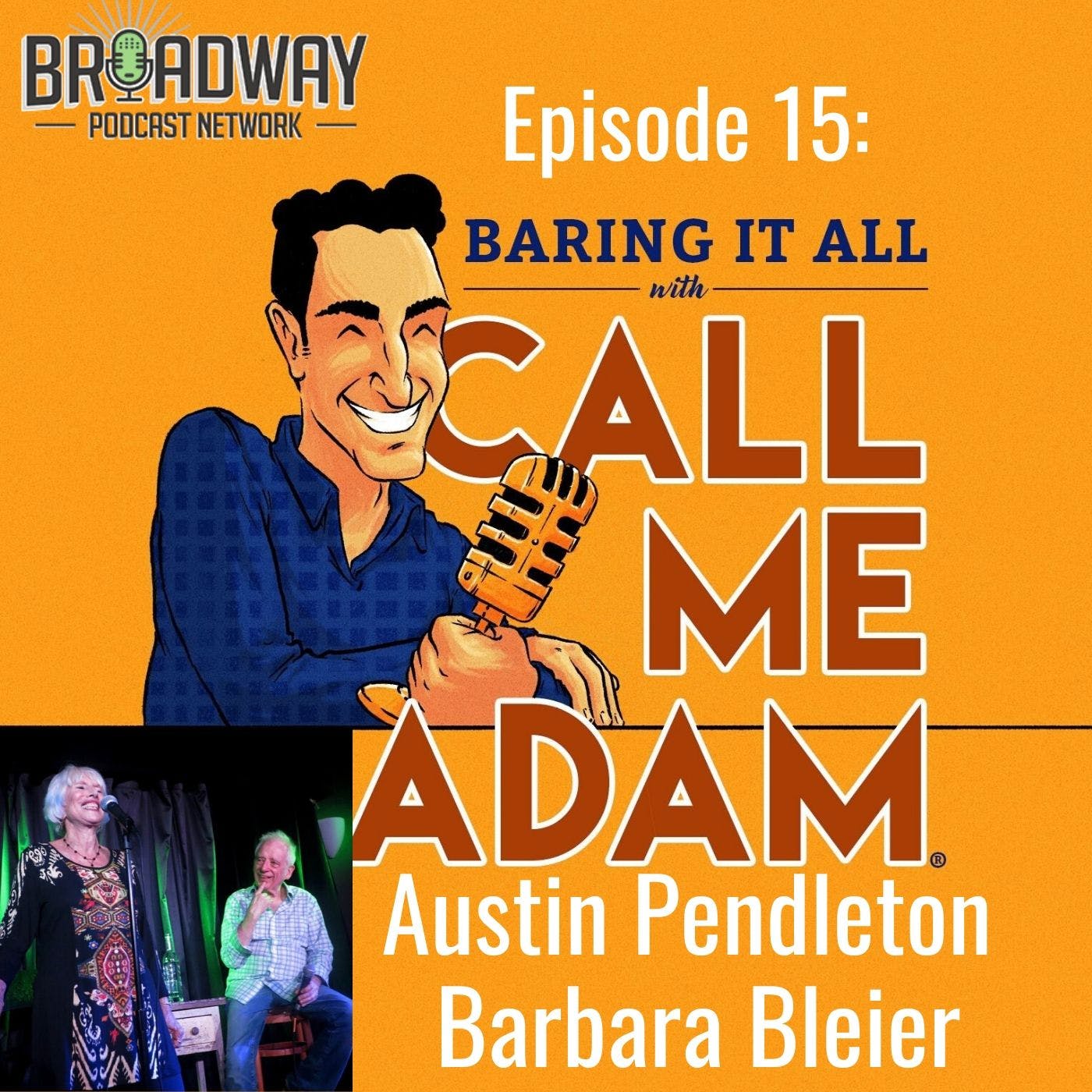 In this episode of Baring It All with Call Me Adam, live from The Green Room 42, I chat with critically acclaimed performers Austin Pendleton and Barbara Bleier. We discuss their new cabaret show Bits & Pieces, which will play at Pangea in NYC January 7, 14, 21 at 7pm.
Bits & Pieces is like life, itself, made up of bits and pieces of song and stories that sometimes seem to fit together, and sometimes seem random. There will be songs that we’ve never done before, and songs that we’ve done and love…sometimes a leap into the unknown, and sometimes a roar down memory lane! And, of course, there will be the odd story. After all, it, it’s these random moments that create the arc of our lives.
For tickets to Bits & Pieces visit: https://bit.ly/2ZqRUEO

More on Austin Pendleton:
Austin Pendleton is an actor, director, playwright and teacher of acting, who was recently seen onstage as the King in Lear at The Secret Theatre, a critically lauded run. Austin’s Broadway debut was as Motel the Tailor in the original production of Fiddler on the Roof, directed by Jerome Robbins and starring Zero Mostel. He has since appeared frequently on, off and off-off Broadway, and can be seen in approximately 300 films. His many TV appearances include roles on Oz, Homicide, Law and Order and Billions.
As a Director, Austin credits include: Between Riverside and Crazy, CSC productions of Uncle Vanya, Three Sisters, Ivanov and Hamlet. Internationally, both Uncle Bob and Orson’s Shadow were successes. He has most recently directed Luft Gangster for Nylon Fusion Theatre Company & Cloverleaf Collective, A Day By the Sea for the Mint Theatre Company, and A Taste of Honey for the Pearl Theatre. He recently appeared on Broadway in MTC’s production of Choir Boy, and the Wheelhouse production of Aaron Posner’s LIFE SUCKS! He teaches acting in New York at HB Studio, where he studied with Uta Hagen and Herbert Berghof. He also studied acting with Robert Lewis.
More on Barbara Bleier:
Barbara Bleier is a singer/actor/playwright who has appeared on stage, in film, and on TV, as well as in solo shows/revues, nationally/internationally in the cabaret world. She played the mother of a psychopathic killer in the cult classic, Swoon; appeared in the film This is Where I Leave You, with Jane Fonda and Tina Fey, and in They Came Together, with Paul Rudd and Amy Poehler. Her solo show, Who’s Your Mama? was selected for production in the NYC Women at Work Festival. Her two-person revues with Austin Pendleton, Late Nights in Smoky Bars (New York, Chicago and Philadelphia), ‘Tis the Season to Be Morbid and Beautiful Mistake; the Songs of John Bucchino and Amanda McBroom, received critical praise in the press. She has studied acting with Austin Pendleton, singing with Barbara Maier, and musical performance with the late Julie Wilson at the Eugene O’Neill Theatre Center.
Both Barbara and Austin are featured in the recently released award winning film, SUNSET.
Learn more about your ad choices. Visit megaphone.fm/adchoices