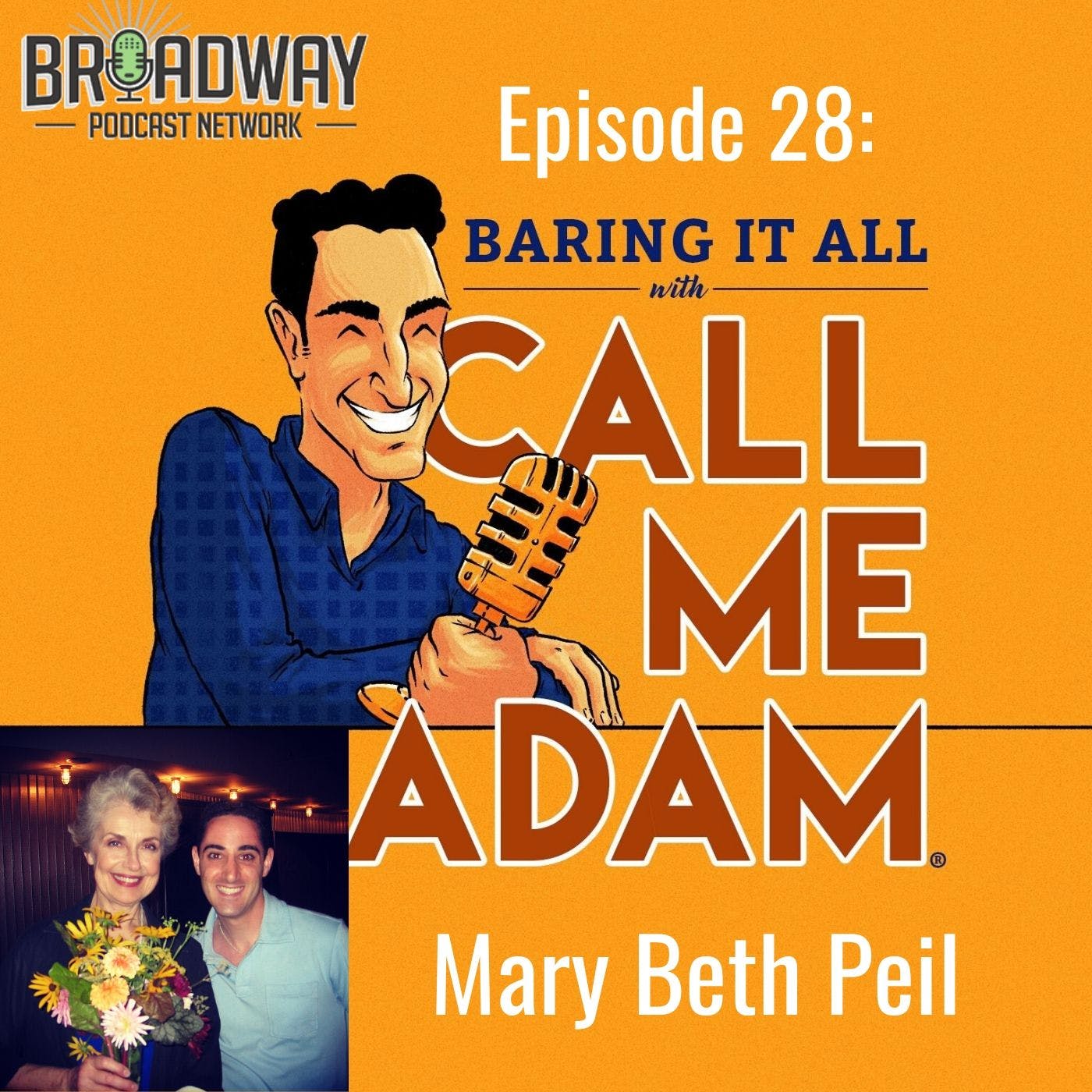 On this episode of Baring It All with Call Me Adam, on the Broadway Podcast Network, I am recording at The Houdini Museum in NYC with the illustrious and timeless Mary Beth Peil. She is known to millions for her roles on Dawson’s Creek & The Good Wife, but Mary Beth Peil has a rich history on both the theatrical and operatic stages.
Mary Beth Peil can currently be seen in the 5-Time Emmy Award winning series, AFTER FOREVER, on Amazon Prime, created by Kevin Spirtas and Michael Slade. Mary Beth Peil appears in Season 2, Episode 4.
AFTER FOREVER takes a look at how to move forward after losing the love of your life. Focusing on a group of friends, both gay & straight, in their 40s and 50s, AFTER FOREVER takes storytelling to a new level. Each episode is about 10 minutes in length, so you can easily binge both season and still go out for the night.
Mary Beth Peil can also be seen in the CW’s Katy Keene in the role of Mrs. Lacy.

More on Mary Beth Peil:
Mary Beth Peil started her professional career touring with Boris Goldovsky’s opera company and the Metropolitan Opera’s national company in Mozart and da Ponte’s The Marriage of Figaro. She also sang with the New York City Opera.
After a starring turn in an out of town production of Kiss Me, Kate, Mary Beth Peil found herself on the national tour The King and I, as the twelfth and final Anna Leonowens opposite Yul Brynner. The production toured the United States, closing on Broadway shortly before Brynner’s death in 1985. Mary Beth was nominated for a Tony Award for “Best Performance by a Featured Actress in a Musical.”
Her other theatrical credits include: Sweeney Todd at the Kennedy Center, the Broadway revival of Nine where she played The Mother to Antonio Banderas’ Guido, Roundabout Theatre’s Broadway revival of Stephen Sondheim’s Sunday in the Park with George, the Lincoln Center Theater production of the Broadway musical Women on the Verge of a Nervous Breakdown, based upon the movie of the same name, Stephen Sondheim’s Follies and most recently Broadway’s Anastasia as Dowager Empress Maria Feodorovna, in which Mary Beth was nominated for a Tony Award, Drama Desk Award, and Outer Critics Circle Award in the category of “Best Featured Actress in a Musical.”
In addition to her stage work, Mary Beth Peil is known to millions of TV viewers for her roles on the CW’s Dawson’s Creek (as Grams, the grandmother to Michelle Williams’ character) & CBS’ The Good Wife, where she played Jackie Florrick, the mother of Chris Noth’s character. Additionally, Mary Beth has been seen in Showtime’s The Reagans as Nancy Reagan’s mother, NBC’s Law & Order and Law & Order: SVU, Fringe, and The VIllage.
Mary Beth has also had appeared in such films as The Odd Couple II, playing Jack Lemmon’s love interest, Jersey Girl, The Stepford Wives, Shortbus, Mirrors, and many others.
Learn more about your ad choices. Visit megaphone.fm/adchoices