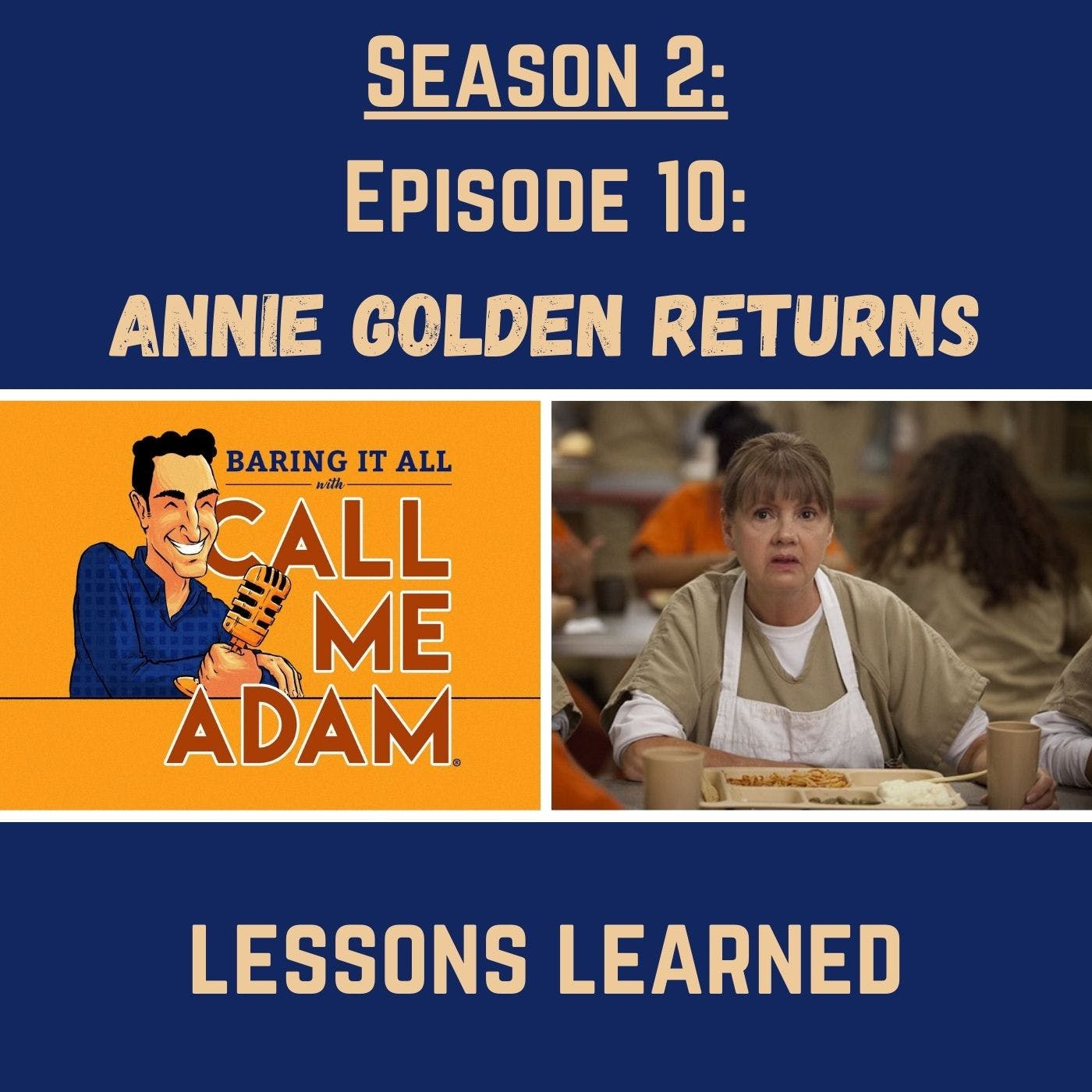 What happens when you are cast in the workshop of a Broadway show, but then don’t move on to Broadway? Have you ever put your foot in your mouth when meeting someone new? Orange is the New Black’s Annie Golden is Baring It All with Call Me Adam about these scenarios, other lessons learned & so much more!
Annie Golden is best known for playing mute inmate “Norma Romano” on Netflix’s Orange is the New Black as well as starring turns On and Off-Broadway inThe Full Monty, Hair (as well as the 1979 feature film), Assassins, Violet, On The Town, and Little Shop of Horrors. She also originated the role of “Broadway Bounty Hunter” in Joe Iconis’ Broadway Bounty Hunter.
Missed Part 1 of my interview with Annie Golden? Click Here to Listen
Join Annie for her many projects/virtual events below:

Out for Blood Podcast – Listen Here

Join my Patreon Family to get backstage perks including advanced notice of interviews, the ability to submit a question to my guests, behind-the-scene videos, and so much more!

My Patreon Family for their continued support: Angelo, Reva and Alan, Marianne, Danielle, Tara, Alex, and The Golden Gays NYC. Join the fun at https://patreon.com/callmeadamnyc.

More on Annie:
Annie Golden is an American actress and singer. She first came to prominence as the lead singer of the punk band The Shirts from 1975-1981 with whom she recorded three albums. She began her acting career as “Mother” in the 1977 Broadway revival of Hair; later taking on the role of “Jeannie Ryan” in the 1979 film version of the musical. Other notable film credits include Desperately Seeking Susan (1985), Baby Boom (1987), Longtime Companion (1989), Strictly Business (1991), Prelude to a Kiss (1992), 12 Monkeys (1995), The American Astronaut (2001), It Runs in the Family (2003), Adventures of Power (2008), and I Love You Phillip Morris (2009).
Her theatrical credits in the Tony Nominated Musical The Full Monty, Violet at Roundabout Theatre Company, Assassins, On The Town, Little Shop of Horrors, and many others.
Golden is best known for portraying mute “Norma Romano” in the Netflix comedy-drama web television series Orange Is the New Black from 2013-2019. In 1985-1986 she appeared as the recurring character “Tommy” in Miami Vice, and from 1989-1992 she portrayed the recurring role of “Margaret O’Keefe” on the sitcom Cheers. She has appeared as a guest star on several television programs, including American Playhouse, Dear John, Father Dowling Mysteries, High Maintenance, Law & Order, and True Blue among others.
Learn more about your ad choices. Visit megaphone.fm/adchoices