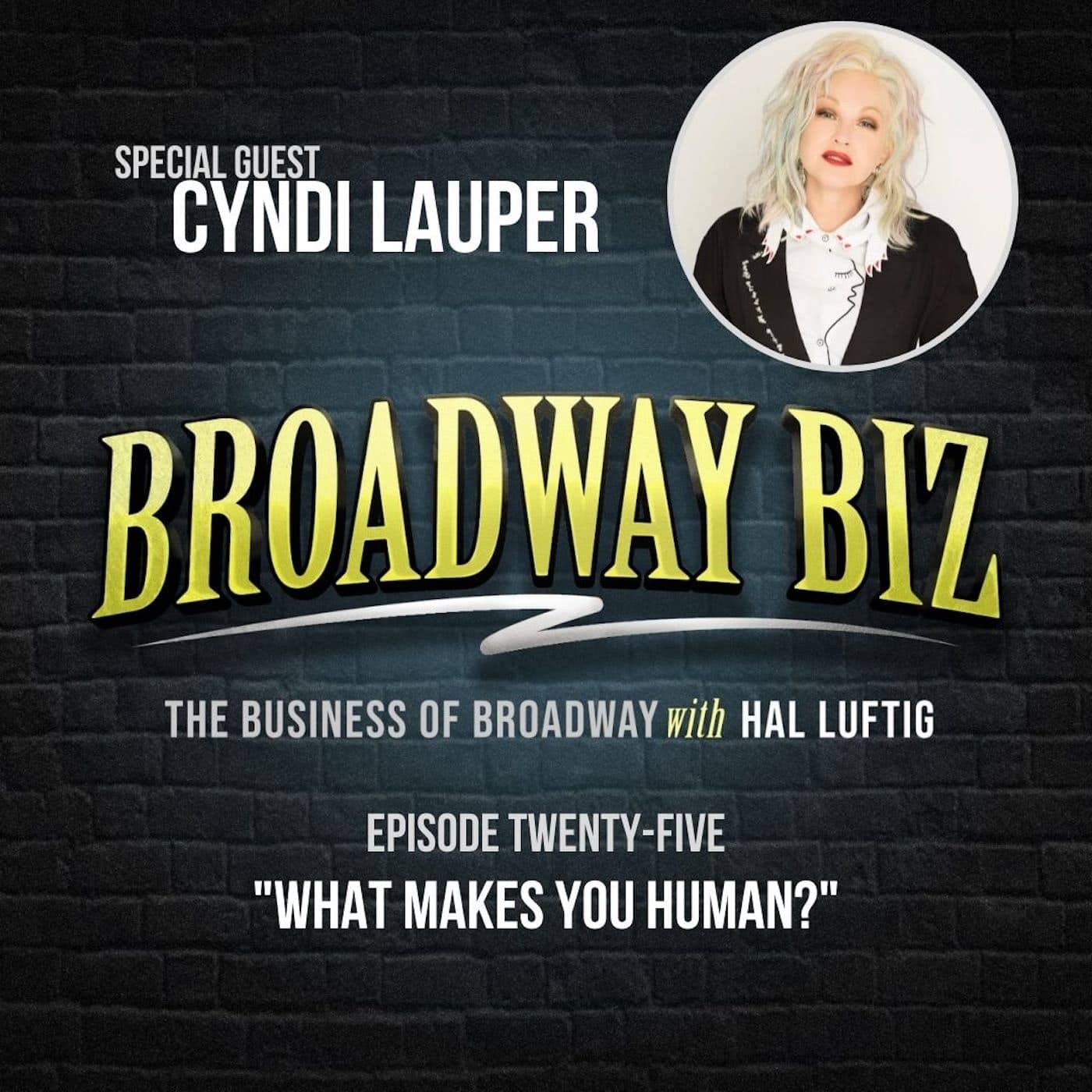 #25 – What Makes You Human? with Cyndi Lauper

What a thrill to welcome Cyndi Lauper to the podcast for its first season finale!

In their illuminating conversation, Cyndi and Hal speak about her very personal process writing “Not My Father’s Son” for Kinky Boots and the importance of her glass ceiling-breaking Tony win for Best Original Score. Cyndi reflects on the roles of women in her family and their influence in shaping her idea of womanhood. Finally, Cyndi shares the creative freedom she feels while writing for Broadway and the importance of recognizing each of our own authentic selves.

Cyndi Lauper is a groundbreaking Grammy, Emmy, and Tony Award-winning songwriter and performing artist with global record sales in excess of 50 million. Her iconic voice, influential punk glamour, and infectious live shows have catapulted her to stardom. Lauper won the Grammy Award for Best New Artist with her first album, She’s So Unusual, and became the first woman in history to have four top-five singles from a debut album. Since then, Lauper has released ten additional studio albums, yielding timeless classics like “Time After Time” and “True Colors,” and the anthemic “Girls Just Wanna Have Fun.” She’s been nominated for 15 Grammy Awards, two American Music Awards, seven American Video Awards, and 18 MTV Awards. In 2013, Cyndi Lauper became the first solo woman to win Best Original Score (music and lyrics) for Kinky Boots. She contributed a Tony-nominated song to the score of the Broadway musical SpongeBob SquarePants and is currently writing the score for the Broadway adaptation of the 1988 feature film Working Girl. A pillar of female success, Lauper was inducted to the Songwriters Hall of Fame in 2015, released a New York Times best-selling memoir, and continues to collect impressive accolades across the music industry and beyond. In 2018, Lauper designed and launched a sold-out Home Decor Collection with Grandin Road and added a guest starring role on CBS’ hit TV show Magnum PI to her acting resume. She closed out 2018 by receiving the “Icon Award” from Billboard at its 13th annual Women In Music event and brought down the house with a rousing tribute to Cher at Kennedy Center Honors.

In addition, Lauper is tireless in her advocacy work. She has been an activist since day one, always fighting for the underdog – especially women, people living with HIV/AIDS, and LGBTQ people. Her commitment runs so deep that she started her own charity, the True Colors United in 2008 to bring an end to homelessness amongst LGBTQ youth, who make up to 40% of the youth homelessness population.

Over the past 10 years, the True Colors United has had an indelible impact on ending youth homelessness in America. From playing a lead role in securing $167.5 million in new annual federal funding from Congress to invest in 46 communities across the country, which Cyndi powerfully testified in support of in the U.S. Senate, to training close to 2,000 homeless youth service providers for free over the past year to inclusively work with LGBTQ youth, Cyndi and the True Colors United are fundamentally changing how the country is working to prevent and end youth homelessness for the 4.2 million youth who experience it each year.