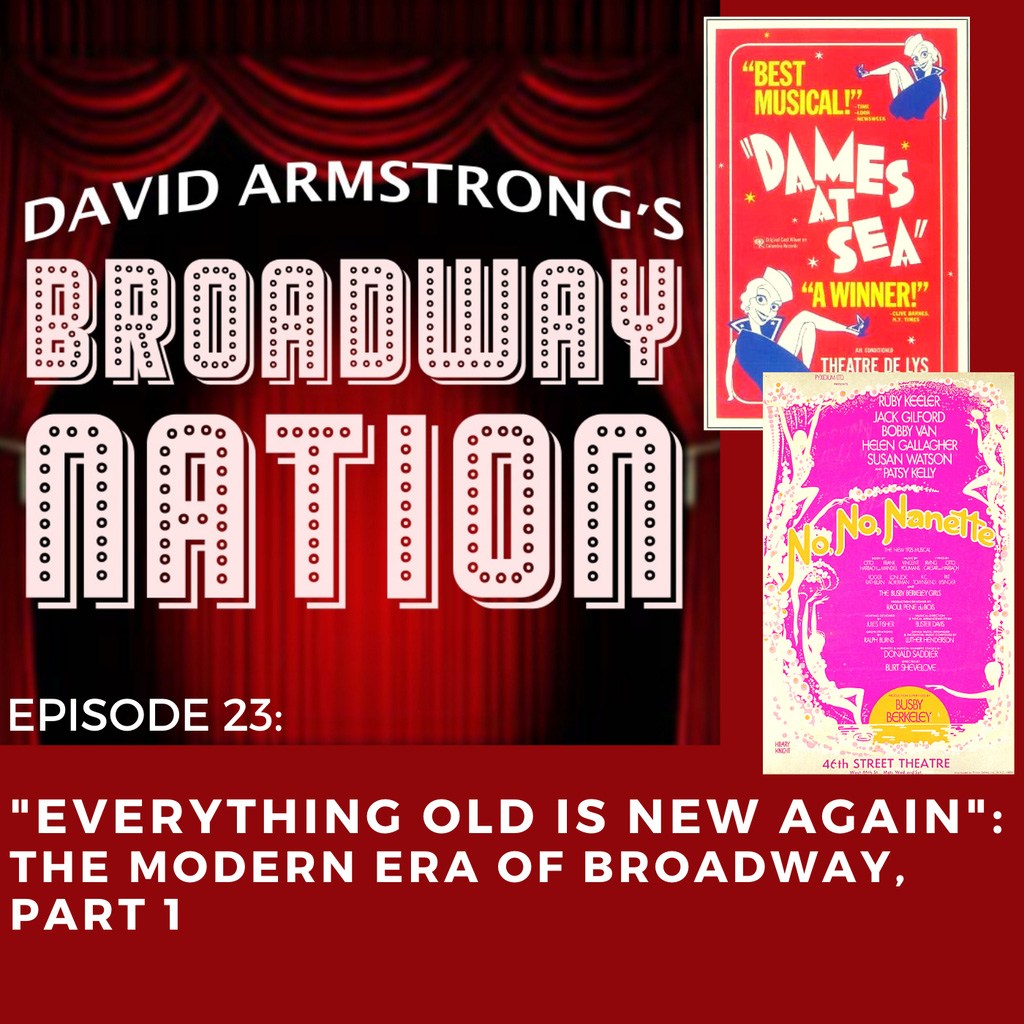 Episode 23: “Everything Old Is New Again”: The Modern Era of Broadway, Part 2.

In the last episode I outlined how a new wave of brash young songwriters swept aside the Golden Age and ushered in Broadway’s Modern Era with shows such as Hair, Jesus Christ Superstar, Godspell and Two Gentleman of Verona.

But surprisingly, in the midst of this ongoing triumph and ascendance of the Rock Musical, the biggest hit of 1971 was a revival of the Silver Age musical comedy, NO, NO, NANETTE. That’s right the Vincent Youmans musical that has introduced the songs “Tea For Two” and “I Want To Be Happy” way back in the Roaring 20s.

With a heavily retooled book, sparkling new orchestrations and arrangements, and a snazzy, art deco inspired set and costume design, this reincarnation of No, No, Nanette was billed as “the new 1925 musical”. And it became a smash hit, running for 861 performances, and winning 4 Tony Awards for Choreography, Costume Design, and for two of its stars Helen Gallagher, and another vintage movie star, comedian Patsy Kelly. And, after years of it being almost entirely absent from Broadway — Nanette brought tap dancing back into fashion in a major way.

Most significantly, Nanette fanned a mania for everything and anything that recalled the music, style, and glamour of the 20s, 30s and 40s. The press dubbed this mania “The Nostalgia Craze” as it quickly spread into every aspect of American life.

In this episode Albert Evans and I explore the origins of Broadway’s “Nostalgia Craze of the 1970s” — where it came from, and what artistic, social and cultural forces came together to spark this unlikely phenomenon. We look at its roots in the counterculture youth rebellion of the 1960’s, the rediscovery of classic films from the 1930s and 40s on television, and in the popularization of gay camp culture via the off-off Broadway mega hit DAMES AT SEA. All of this would lead to the triumphant 1971 Broadway revival of NO, NO, NANETTE, which was billed as “the new 1925 musical”.