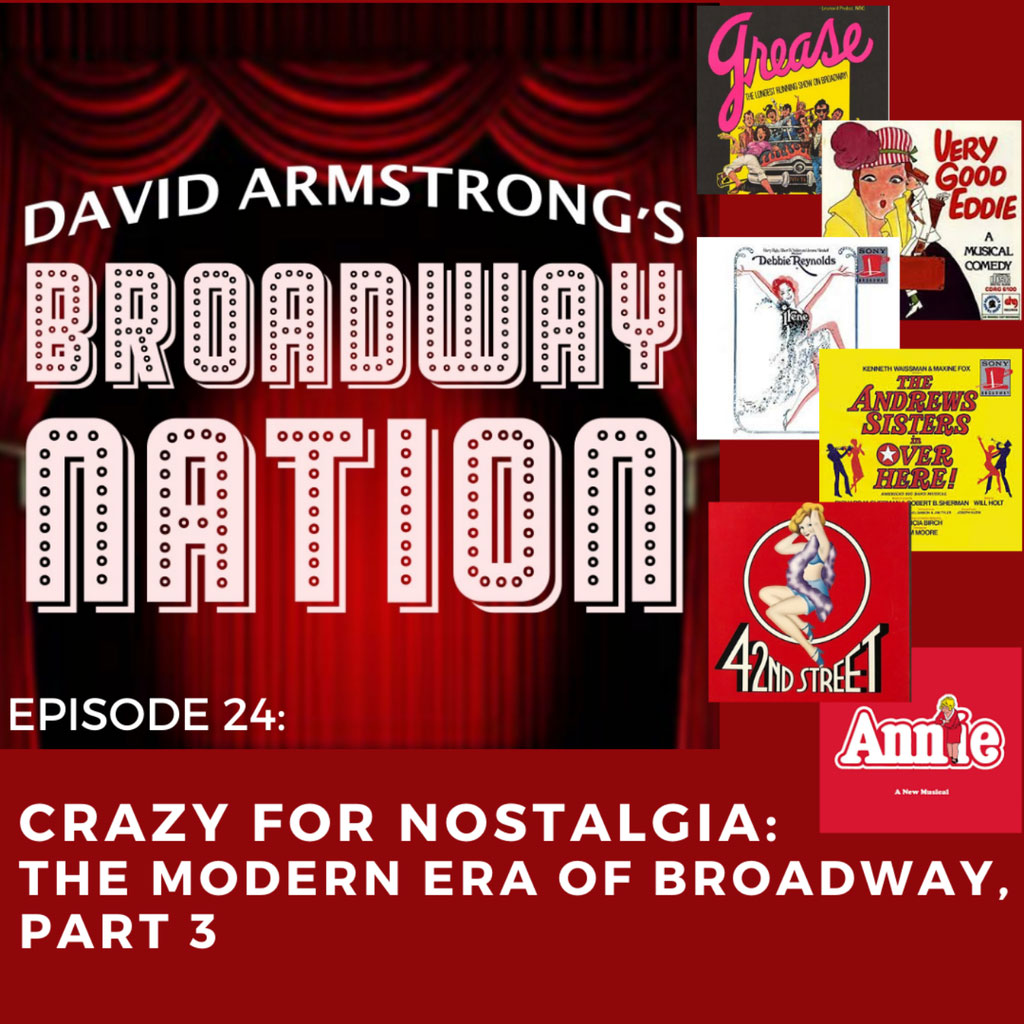 Episode 24: Crazy For Nostalgia – The Modern Era of Broadway, part 3

In this episode I continue my review of Broadway’s Nostalgia Craze of the 1970s and beyond.

Many of the musicals that emerged in the late 60s and very early 70s were also influenced by the incipient Nostalgia Craze, even if overall their shows were decidedly modern. HAIR, Jesus Christ Superstar, Godspell, Two Gentlemen of Verona, Applause  all included musical sequences that recalled the Vaudeville era and Silver Age of Broadway. So nostalgia was in the air, and then No, No, Nanette sent it into the stratosphere!

And all of this was before the nostalgia craze expanded to include the 1950s.

Almost exactly one year after the premiere of Nanette the musical Grease opened on Broadway. It became wildly popular and ran for eight years on Broadway passing Fiddler to become the longest running musical of all time until A Chorus Line passed it. And Grease’s enormous success set into motion a 1950s wing of the nostalgia craze by inspiring both the movie American Grafiiti (1973) and the TV show Happy Days (1974).

The success of Nanette led directly to a 1973 revival Irene, the smash hit musical that opened in 1919 and became the longest running musical of its day. And Grease led directly to Over Here !, the 1974 musical in which the director, choreographer and producers of Grease attempted to do for the 1940s, what their previous show had done for the 1950s. The two still living Andrews Sisters, Patty and Maxine, where enticed to star in Over Here!, and the Sherman Brothers, of Disney fame, provided a terrific set of brand new very authentic sounding Big Band era style songs for them to swing.

It was inevitable that the movie 42nd Street itself would be transformed into a Broadway stage musical in 1980. That same season there was the Marx Brothers inspired revusical A Day In Hollywood A Night In The Ukraine. 1983 brought a hit revival of Rodgers & Hart’s On Your Toes, and over the next decade there would be two Gershwin “revisals”, both of them so heavily reworked that they were given new titles: My One And Only in 1983, and Crazy For You in 1993. In between, came the Broadway debut of a 1937 London hit Me And My Girl in 1986.

I would even include the 1980 blockbuster Annie in this category. Although it was, of course, an entirely new musical it certainly played on nostalgia for the comic strip and radio show Little Orphan Annie from the Depression Era, and smartly used that to echo the recession of the 1970’s.

Some people would say that the Nostalgia Craze never ended, at least as far as Broadway is concerned.  Although, revivals of popular musicals have been part of the Broadway mix throughout most of its 120+ year history, the success of No, No, Nanette and its successors created a pattern and expectation that in every season – there should be at least enough revivals to fill out a Tony Award “Best Revival” category. And you could say that the immense popularity of City Center’s Encore Series is an extension of the Nostalgia Craze, as well. I for one hope that we will never tire of rediscovering and reinventing the great musicals of the past.