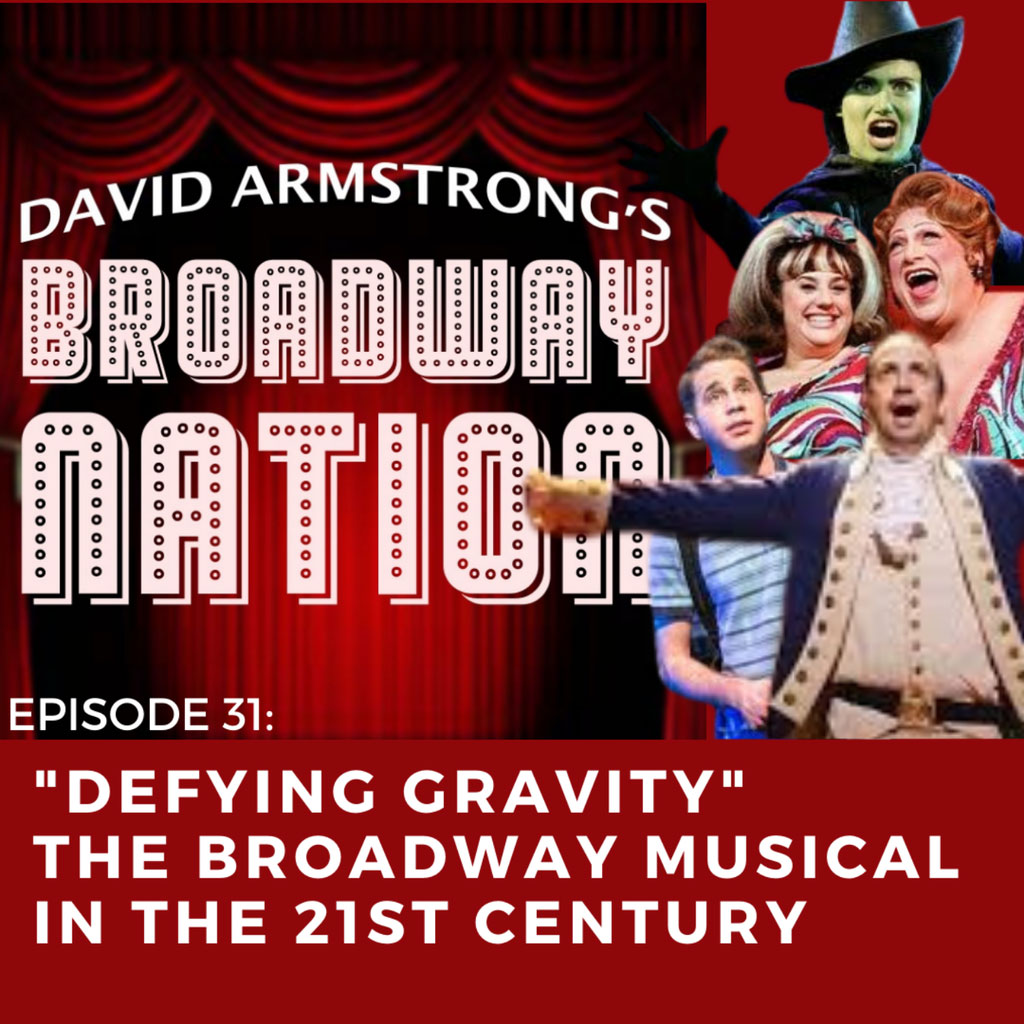 Episode 31:”Defying Gravity” – The Broadway Musical in the 21st Century

In today’s episode I focus on the Broadway Musicals of the 21st Century.

Perhaps surprisingly, the current generation of Broadway creators has re-embraced and reinvigorated both the “Musical Comedy” and the “Musical Play” in ways that I think would make Rodgers & Hammerstein very proud. At the same time they have introduced something sort of new – the “Jukebox Musical”. In the process, and with a major assist from the Walt Disney Company, the Broadway Musical has achieved new heights of prosperity, popularity and cultural relevance in the 21st Century.

The most recent major innovation in musicals are shows that are often called “Jukebox Musicals”. This new kind of musical emerged at the dawn of the 21st Century and has become enormously popular and somewhat controversial.

What exactly is a “Jukebox Musical”? My definition is that they are musicals that tell their story using a collection of previously existing songs rather than songs that were written specifically for the show. Most often these are pop songs that were not originally conceived for the theater.

There are really two different kinds of jukebox musicals: biographical musical that dramatizes the life and times of a legendary performer, songwriter, group, or band and is built around the music and lyrics they created and/or made famous. – and shows like Mamma Mia! that employ pre-existing hit songs to tell new, original stories.

Finally, that brings us to the “Musical Play”. This durable form is still going strong!

The first hit “musical play” of the 21st Century was Wicked. With music & lyrics by Stephen Schwartz, and a book by Winnie Holtsman, this musical is adapted from Gregory Maguire’s best-selling 1995 novel titled Wicked: The Life And Times of the Wicked Witch of the West. So far, Wicked has been playing 17 years on Broadway and is the 5th longest running show of all time.

Wicked has been followed by a string of vibrant, popular and acclaimed musical plays that do not shy away from tackling important and provocative subject matter. These include The Color Purple, Spring Awakening, The Light In The Piazza, Grey Gardens, In The Heights, Billy Elliott, Next To Normal, Memphis, Once, Fun Home, Hamilton, Waitress, Dear Evan Hanson, Come From Away, The Great Comet, The Band’s Visit and Hadestown.

Not one of them is a conventional love story. Seven of them deal with issues racial equity, social justice and inclusion. Four of them deal with mental health issues. Six of them include queer leading characters. Almost all of them focus on transgressive women who reject and break the rules of society. And almost all deal with the challenges of forming and maintaining a community.

And these three themes – Racial and social justice, Transgressive women and community — dominate the 21st century musical comedies as well. None of this should be a surprise because — as we will discover on the next episode of Broadway Nation — these have been the primary and most prevalent themes of the Broadway musical throughout its history. One of these 3 themes are at the center of almost every musical, and they are what have made this art form so powerful, popular, and subversive.