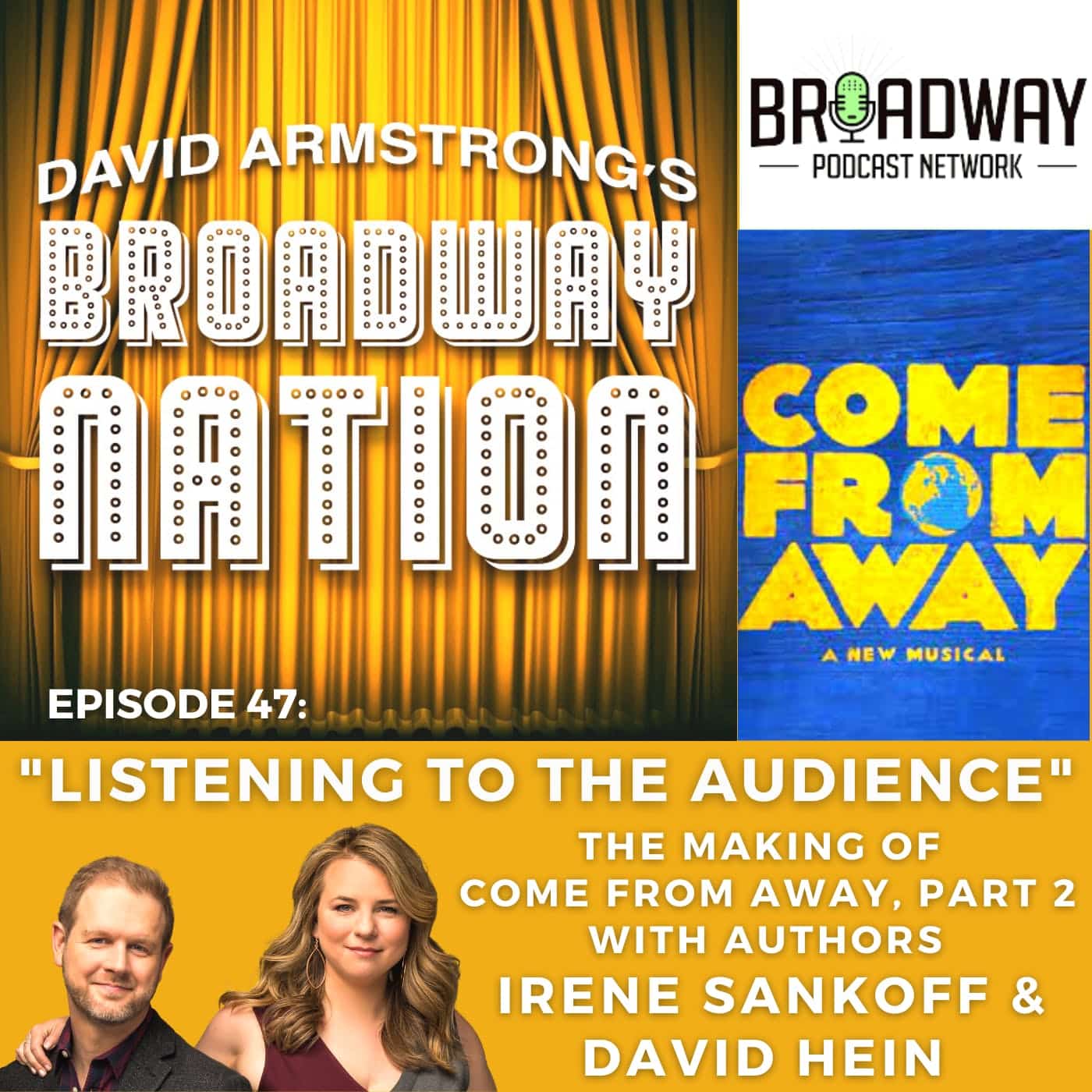 Episode 47: “Listening To The Audience”

This is the second part of my recent conversation with Irene Sankoff & David Hein — the dynamic writing team and married couple that created the international smash hit musical Come From Away.

Five productions of Come From Away have recently reopened around the world: Broadway, Toronto, London, Sydney and on tour across America. A new Dutch production has just opened, as well, and a live filmed version of the show is streaming on Apple TV+.

On the previous episode Irene and David related how they got hooked on musicals, and how they went from their first show based on a true story — My Mother’s Lesbian Jewish Wiccan Wedding — to deciding to create a musical based on the real life events that happened in the small town of Gander, Newfoundland in the days following 9/11. They also described what it was like to attend the 10th Anniversary of the events in Gander and then begin to transform the stories they heard there into a musical during an early workshop production at The Canadian Music Theatre Project at Sheridan College. We also explored the classic Broadway shows that influenced and inspired the writing of their book, music, and lyrics for Come From Away.

If you missed part one you may want to go back and catch up on that episode before you listen to this one.

Today we look at the extensive development process that CFA went through on its journey to Broadway – including a workshop in Seattle, a series of productions at the La Jolla Playhouse, The Seattle Rep, Ford’s Theater in DC. and the Royal Alexandra Theatre in Toronto, as well as a thrilling concert presentation in Gander where it all began.

Back in 2015, I served as the Executive Producer and Artistic Director of The 5th Avenue Theatre in Seattle and, as such, I had the great pleasure of co-producing that original Seattle workshop of Come From Away. This was the first time that the show’s Tony award winning director Christopher Ashley and choreographer, Kelly Devine began to work on the show — and it was great fun to recall that exciting experience with Irene and David.

Come From Away is the fifth musical to originate in Canada and eventually open on Broadway.

The first was 1974’s Rockabye Hamlet with book, music and lyrics by Cliff Jones. This rock musical adaptation of Shakespeare was originally titled Kronborg 1582 and was well received, first as a radio series on the CBC, and then at the Charlottetown Theatre Festival and on tour in Canada, before being retitled and opening on Broadway with Gower Champion as the director. It became a legendary flop and closed after 7 performances.

Next, in 1980 came the intimate and engaging Billy Bishop Goes To War written by John McLachlan Gray the show featured one actor to playing18 different roles to tell the story of real life Canadian fighter pilot Billy Bishop during the first World War. This show nearly doubled the run of Rockabye Hamlet closing after 12 performances. However, over the next ten years Billy Bishop Goes To War received scores of productions at theaters all across North America.

The Story Of My Life, with music and lyrics by Neil Bartram and book by Brian Hill, opened on Broadway in 2009. Unfortunately, it had an even shorter run than either of the previous two Canadian shows.

However, one year earlier, a group of Canadian writers finally scored a significant hit with The Drowsy Chaperone – book by Bob Martin and Don McKellar, and music and lyrics by Lisa Lambert & Greg Morrison. This delightful show opened on Broadway in 2008, received Tony Awards for Best Book and Best Original Score, and ran for 674 performances.

There have been a few other Canadian writers that found success on Broadway – Galt McDermott being the most famous of them – but that was with shows that originated in the US.