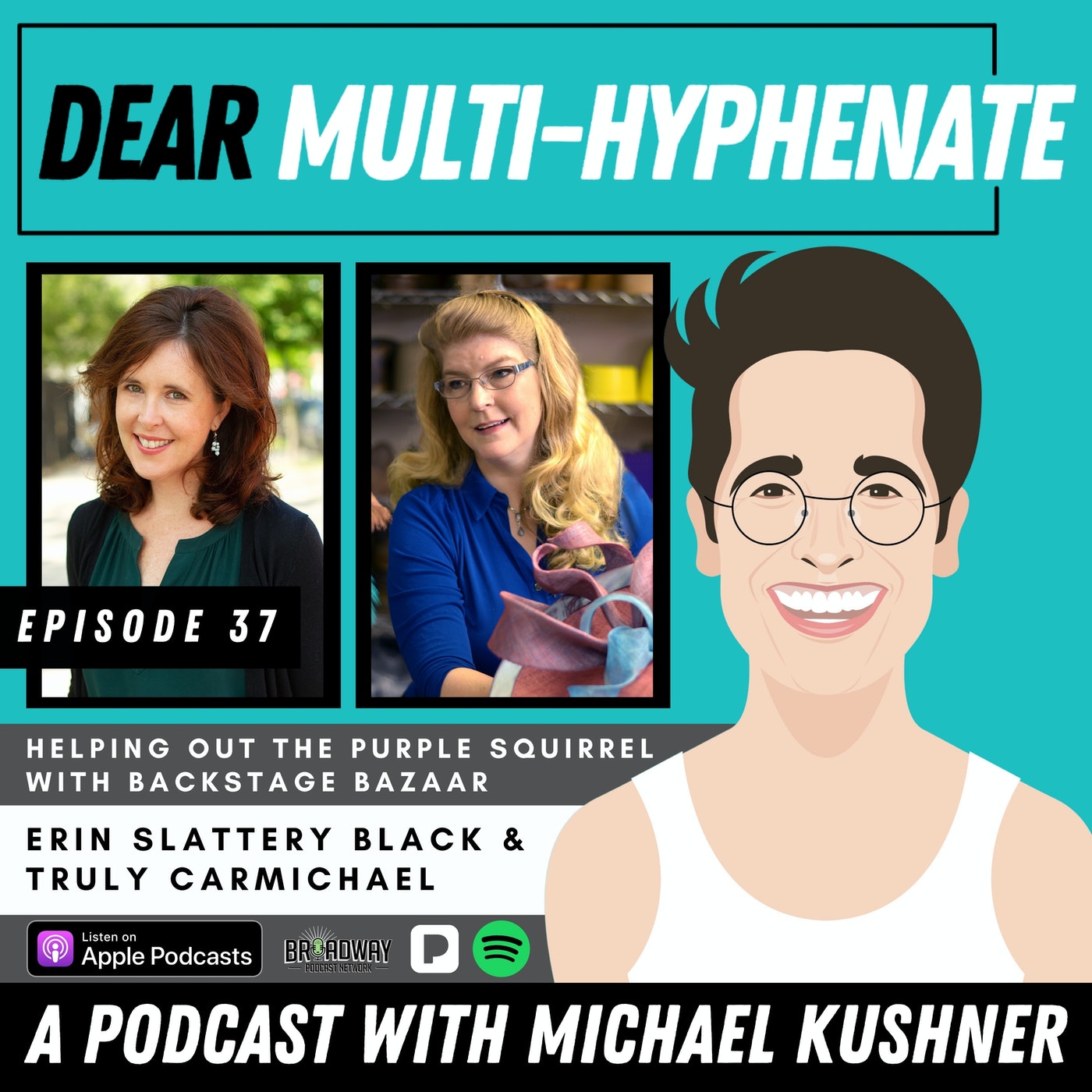 “When someone asks you to do a job – you just say yes and then you figure out how to do it later on.” Though that might sound backwards – the lesson is to open the door and at least welcome opportunity – that’s what this episode is all about. How did two fabulous women with similar backgrounds begin working on a completely new (and scary!) endeavor? After Erin Slattery Black posted an idea on Facebook, she received an overwhelming response, including a message from Truly Carmichael who offerend help to launch Backstage Bazaar, a virtual marketplace showcasing the amazing art created by the theatre community while their industry is on hold. They came together and with a concoction of a “YouTube and You” and Opening Night mindset – they created an online experience to help artists survive and gain income during CoVid-19. Erin and Truly talk with Michael about blending the identities of artist and CEO – all while thinking about design, tax write offs, and marketing. But the big question is how do we inform other artists that what we are learning during this pandemic is not going away, but it’s also not daunting? If you’ll take anything away from this awesome episode, it’s how to be an expert collaborator – just like Erin and Truly have proven to be.

Erin Slattery Black is a costume designer, maker, stylist and entrepreneur. She holds an M.F.A. in Costume Design and Technology from the University of Texas at Austin and a B.A. in Theatre and Education from Marquette University. Erin has costumed such celebrities as Antonio Banderas, Justin Timberlake, Kermit the Frog and Big Bird. Her career has included costuming for theatre, television, film and opera, as well as corporate and commercial styling work. Erin has worked extensively with the Jim Henson Company, where she served as costume designer for Sesame Street and the Netflix original series, Julie’s Greenroom, with Julie Andrews. Her work can be seen in the movie Spy Kids as well as on Broadway in The Lion King and Willy Wonka. Erin lives in New York City with her husband and four children. In addition to her work as a costume designer, Erin is the CEO of Lyla Tov Monsters, a plush toy company she founded with her husband and oldest daughter. Erin has been awarded four daytime Emmy Awards for her work as Costume Designer for Sesame Street and is the recipient of the Zelma Weisfeld Award for Costume Design. Erin has served as an Assistant Arts Professor, Adjunct Instructor, Costume Director, and design mentor for the Tisch Drama Department at New York University. She has also worked with students as a lecturer at Carnegie Mellon University, The University of Texas at Austin, Marquette University, and Ithaca College as well as serving as designer in residence at Marquette University.

Truly Carmichael is an award-winning professional costumer and milliner who holds a Master of Fine Arts degree in theatrical costume construction and design. She has worked in various capacities in costume production shops across North America, including a full-time role as painter/dyer/crafts artisan at the Children’s Theatre Company in Minneapolis and Head cutter/Draper at the Alley Theatre in Houston, Tx. Most recently a Tailor/Milliner at the Shaw Festival in Niagara-on-the-Lake, Ontario, she also has a thriving couture millinery business (trulycouture.ca) and an eCommerce website that caters to actors and re-enactors who need 16th century hats and jewelry (trulyhats.net)

Truly’s other career is a Project Manager and Technical Writer for a telephony software company in Seattle.