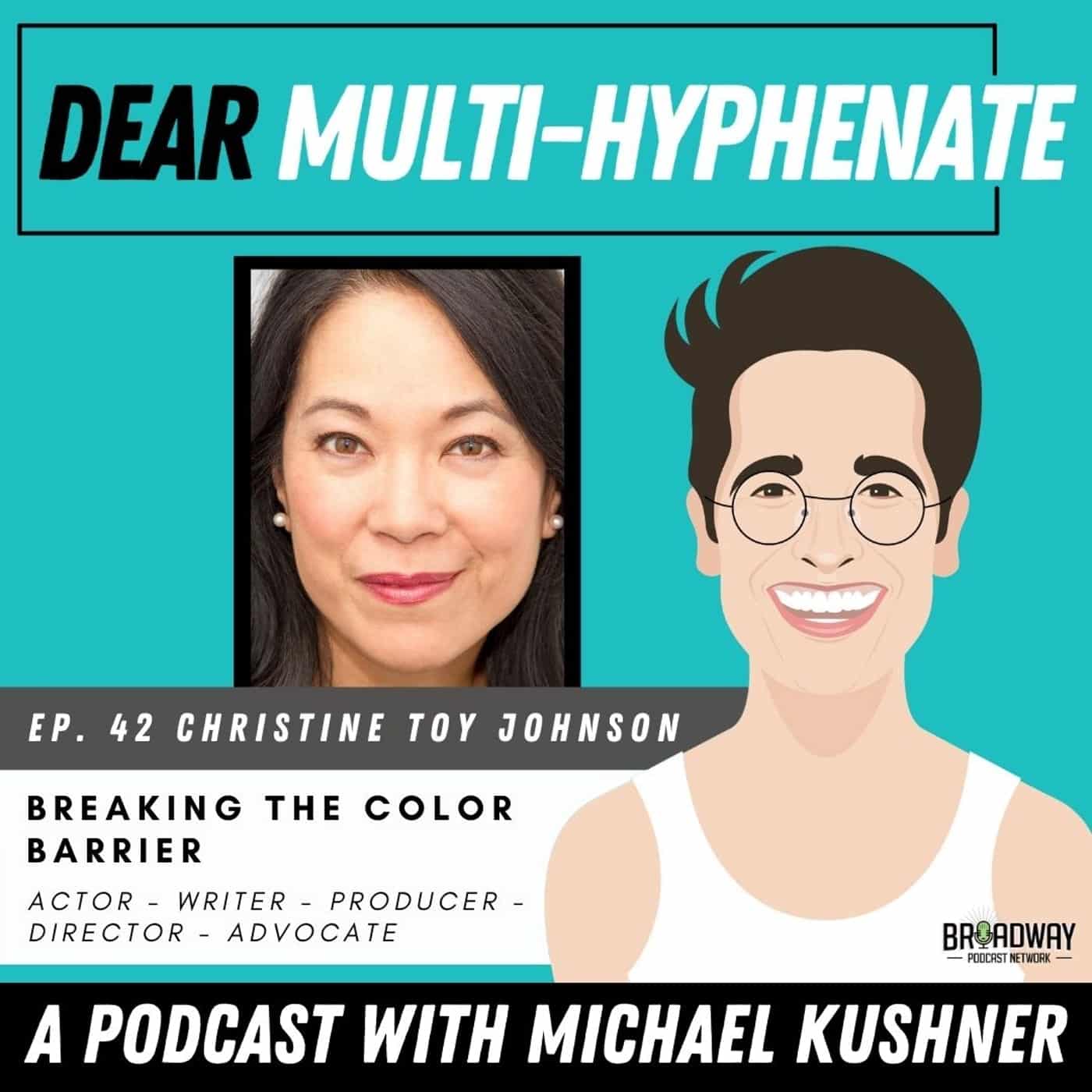 “Being open to the idea that your dreams coming true often look very different to how you first imagine them.”

Bringing compassion and kindness; intentional generosity into whatever space is possible. That’s what Come From Away’s Christine Toy Johnson is all about. In fact, that’s what this whole episode is about. From sharing where we were on 9/11 to global world views in casting a representation, in this episode we tackle what it means to integrate compassion, kindness, and intentional generosity into our art.

When did Christine start to identify as a multi-hyphenate? When Christine was four years old, she began as a child model who also put on plays for her family about the Twelve Days of Christmas. It wasn’t long after she realized she needed to do many things not just to survive, but to find happiness.

Christine is an actor, writer, director, and advocate for inclusion and her career truly is an extension of her soul. Right at the top of her bio, she prides herself on breaking the color barrier. What does that mean? When Christine started out in the industry, there was almost an expectation of the roles she could play. On representation, Christine says, “There is a direct line between underrepresentation and the perpetualization of harmful stereotypes all the way to the dehumanization and erasure of the three dimensional people that make up the population whose actions are they trying to reflect.” In the episode, Christine breaks this down from the perspective of an advocate for inclusion.

Christine is right – and she’s built a career on being right! But of course, we’re human and sometimes we get in our own way. But Christine always rises above. She says, “There’s no time to wallow in self doubt that would debilitate you and take you off course.”

Speaking of rising above, Christine took quarantine by the horns and focused on her writing. She finds her through line is about belonging, finding her place in the industry, and being sure that we all belong, all while finding that other people (consciously or subconsciously) disagree.

This episode is full of joy, inspiration, first hand experience, and lots of helpful steps for budding producers and creators – for example, what a grant is and how to apply for one. As always, please rate, review, and subscribe to Dear Multi-Hyphenate!

Christine Toy Johnson is an award-winning writer, actor, director and advocate for inclusion. Her written works have been produced and/or developed by the Roundabout, Village Theatre, Barrow Group, Prospect Theatre, Weston Playhouse, O’Neill, Women’s Theatre Festival, CAP 21, Greater Boston Stage Company, the Abingdon Theatre Company and more and are included in the Library of Congress’s Asian Pacific American Performing Arts Collection (Playwrights Division). She is an alum of the BMI Musical Theatre Writing Workshop, was a 2016 fellow of The Writers Lab (supported by Meryl Streep, Nicole Kidman and Oprah Winfrey), serves on the Council of the Dramatists Guild and is host of the Guild’s podcast “Talkback” on Broadway Podcast Network. As an actor, Christine has appeared extensively on Broadway, Off-Broadway, in regional theatres across the country and nearly 100 television and film appearances including recurring guest star roles on Marvel’s “Iron Fist”, “Bull”, “The Americans”, “You”, “Law and Order: SVU” and more and is on “extended intermission” from the North American tour of COME FROM AWAY. Rosetta LeNoire, JACL, Asian American Arts Alliance, Obie awards for advocacy in diversity and inclusion. For details, please visit www.christinetoyjohnson.com

In the segment You Got A Question? Michael features a question from a college student who asks “When do we know when to add a hyphen to our multi-hyphenate identity?”