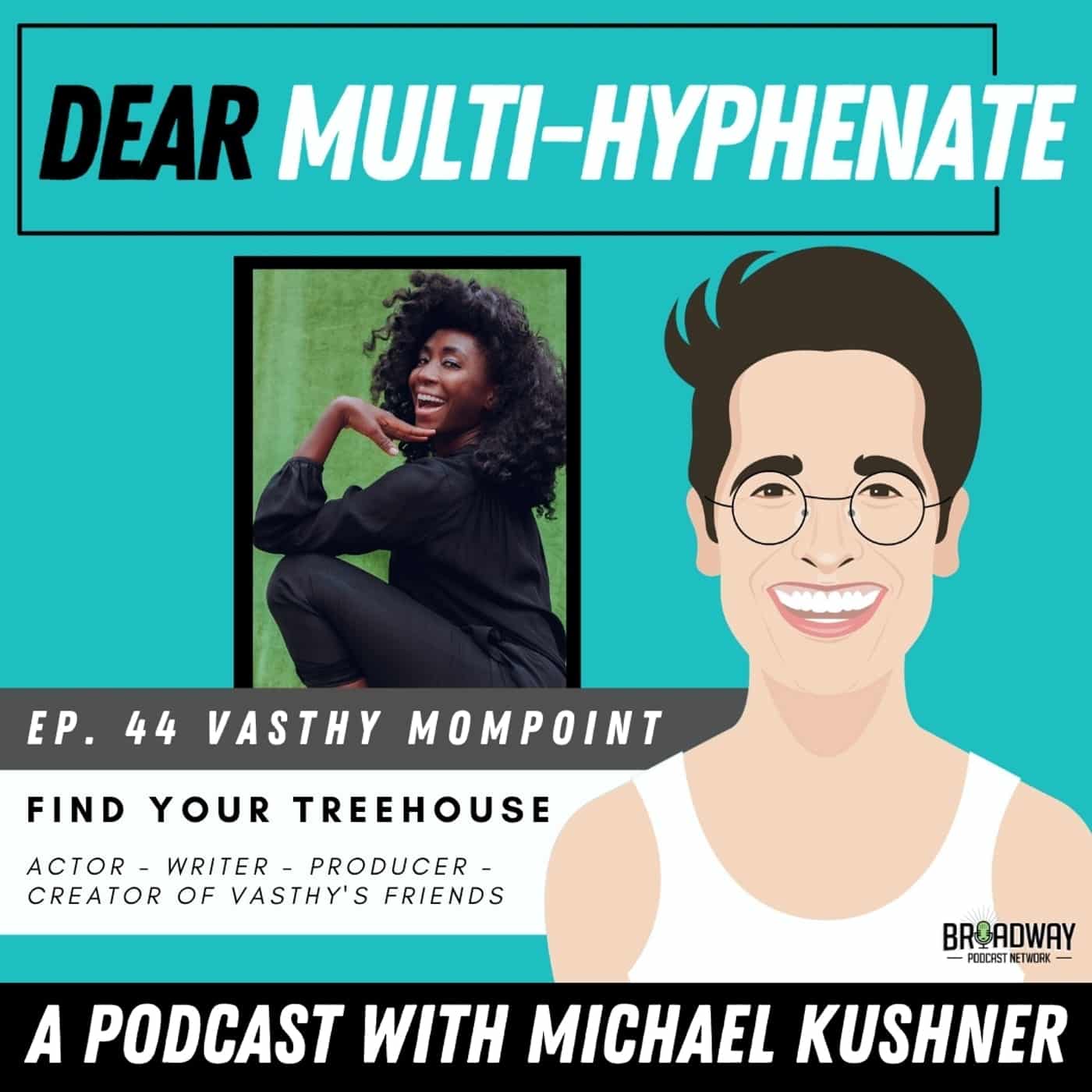 “I think there needs to be a new wave of producers who lead from the heart. Producing can be an artistic, beautiful process if you choose to make it that way.”

Vasthy Mompoint has frequented Broadway in shows such as The Prom, Spongebob, Mary Poppins, and more. Most recently, Vasthy played Tameka in the Ryan Murphy Netflix film version of The Prom. She is also the creator of Vasthy’s Friends, a children’s show born out of the realization that there is a disconnect in the education system regarding racism and equality, which promotes activism in kids.

To Vasthy, a multi-hyphenate is using all parts of the artistic brain without the limits put on you by the industry. It’s breaking the handcuffs of all the technicalities and allowing for artistic freedom.

Vasthy produces, she performs, she plays the guitar, she writes… “And it’s not because I’m brilliant at them,” she says, “I just genuinely enjoy doing those.”

A little over two years before we recorded this episode, Vasthy became very sick – and because she was sick she wasn’t able to do many of the things she loved. Instead, she started writing which came out freely. After writing and producing a show for 54 Below and then submitting her writing to CBS, Vasthy found a whole new voice as a writer and producer. Out of illness came a new identity.

“Producing your own show doesn’t have to be imitating something someone else did, or looking at the way it’s all been done… it’s literally bringing who you are, your authentic self, how you feel, how you want to tell your story because it’s you – you get to control everything.”

Vasthy wants to see real people and stories on stage – so going from Spongebob to The Prom on Broadway was incredibly special as she was able to connect with audiences of a younger age who were able to see themselves on stage. Vasthy also keys us into the incredible way she fights the system, by producing Vashty’s Friends which provides young children to not only see themselves on screen, but also to learn compassion and empathy about others.

“It’s easier to teach a kid to love, than to teach an adult how to not hate.” Vashty says. And she’s completely correct.

Vasthy Mompoint is an Actress, Dancer, Singer, by way of Alabama, North Carolina, and Haiti. On-screen Vasthy has appeared in Nora from Queens (Daniel Kwan and Daniel Scheinert), The Prom Movie (dir Ryan Murphy), Dick Johnson is dead (Kirsten Johnson) The Mysteries of Laura (Norman Buckley), The Detour (Jason Jones) and The Cartoon show, The Winx Club. On stage, Vasthy has appeared on numerous stages from Broadway to Egypt including Prom The Musical, Spongebob Squarepants, Mary Poppins, The Taming of the Shrew, Rocky, Ghost, The Legend of Georgia McBride, Aida, Hair, 42nd Street, and Ragtime. As a dancer, Vasthy has performed with James Corden, Yolanda Adams, Brian McKnight, Michael Jackson, Marc Anthony, Gloria Gaynor and more. And Vasthy has also created Vasthy’s Friends, a video platform for Broadway performers to write, choreograph, and and compose original kid-friendly programming.