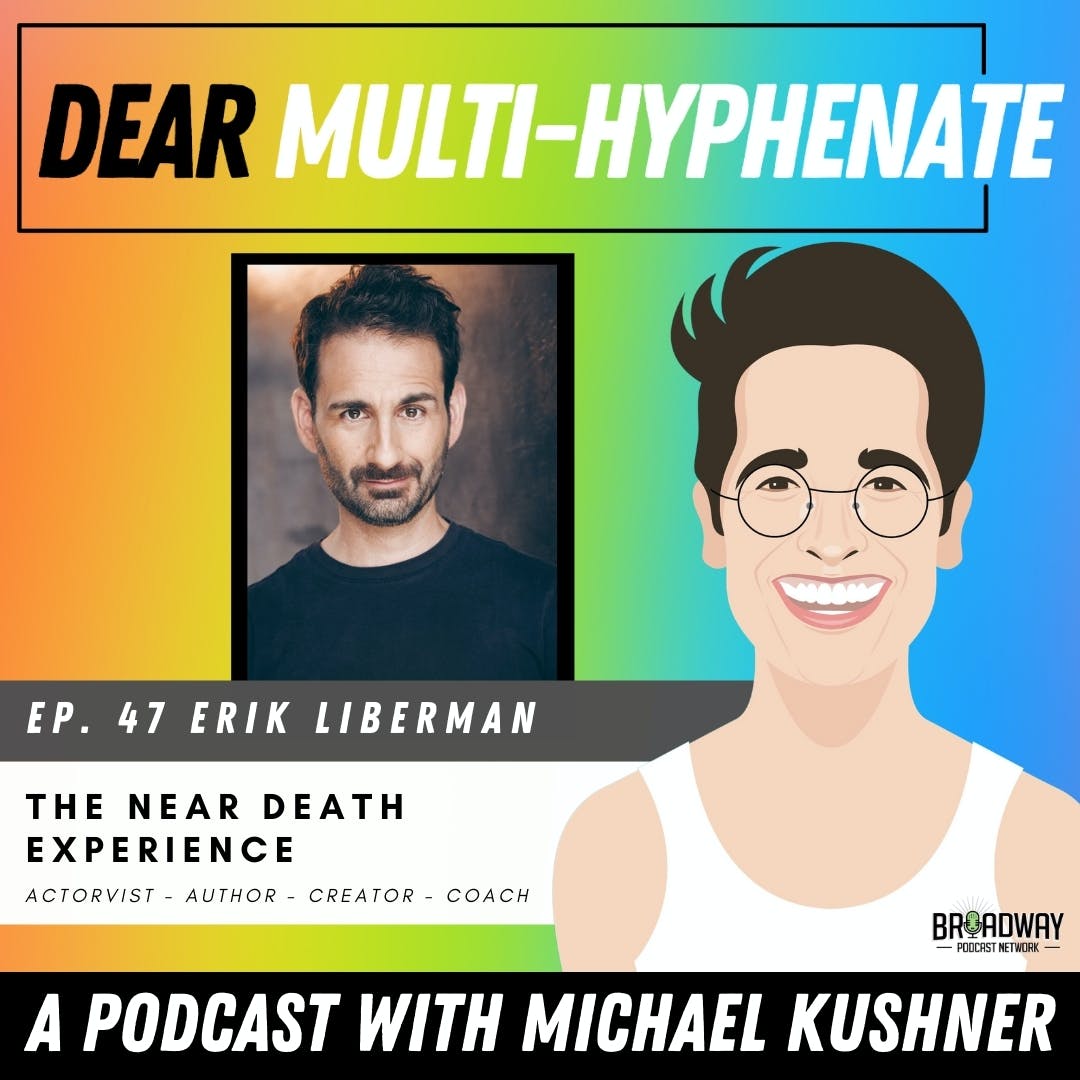 #47 – Erik Liberman: The Near Death Experience

“Ultimately, I think our job as artists is to share the secrets of our heart so that others may be set free… saving our own lives so that others can save theirs.”

Erik Liberman soothes the soul, simple as that. Whether or not it’s his voice, his charm, his talent, or his point of view, Erik makes the world better for other people.

“It’s not enough to want to make it, you’ve got to have something to make it with,” is a quote he holds near and dear. After the experience of seeing Chita Rivera in Kiss of the Spider Woman, and having said that to Erik, it kept him focused and able to hang in the industry and build success; a concept we touch on in this episode paired with failure.

Whenever interacting with someone, Erik tries to hold a vision for who someone was and who they will be. In a place of presence, it not only meets them in the now, but it extends forward and backwards. “We seek to be drawn from the plague of linear time into an encounter of infinity,” he says. “And that’s why with great stars they say they stopped time.”

Erik is also a survivor of a near death experience, which has informed his artistry. “What I realized was the thing that everything was fearing: death, was the wrong place to put the focus,” he says. “The place to put the focus is on utilizing the time one has in the body to do what one came for.”

In this episode, Erik provides incredibly useful insight and tools on how the multi-hyphenate experience helps us understand the ecosystem of show business as a whole. You’ll also hear us touch on the concept of vulnerability, weaponizing vulnerability, near death experiences, dignity & alignment, existentialism, commercial theatre, activism, and the discipline to sit down with yourself and create something that is bigger than you.

Mentored by Maureen Stapleton, named a YoungArts winner in high school, and trained at London’s Complicité and National Theatre, where he came under the wing of Dame Judi Dench. He received a grant to study with master clown teacher Philippe Gaulier in France, and in Los Angeles, was the face of noted improv-and-sketch-comedy school, The Groundlings.

Liberman was “discovered” by 21-time Tony Award winning director and producer Hal Prince as a winner of the Lotte Lenya Competition. Prince hired him for his Broadway debut in Lovemusik, written by Oscar winner Alfred Uhry and starring Tony winners Donna Murphy and Michael Cerveris, remarking of the actor, “Erik is the real deal. Once you’ve seen him, you can’t forget him.”

Liberman went on to receive Helen Hayes, Ovation, Garland, and Connecticut Critics Circle Awards, his onstage work reviewed as “a showcase of sheer star power.” He originated the roles of The Telephone Guy in the award-winning Band’s Visit opposite Tony Shalhoub, Charles Revson opposite Patti LuPone and Christine Ebersole in War Paint, and Clopin in Alan Menken, Stephen Schwartz, and Peter Parnell’s The Hunchback of Notre Dame.

Other theatre highlights include: Motel the Tailor in Fiddler opposite Harvey Fierstein and the film’s star, Topol. Some television credits include: Amazon’s Transparent, Modern Family, and Martin Scorsese’s Vinyl, and he will soon appear in the film American Dream.

Liberman has contributed to books including Performance of the Century, Wisdom From an Empty Mind, and Luminous Life. His master class series, Bridge to Broadway, benefited 45 charities and earned him a 2020 Encore Award from The Actors Fund, and he is currently developing a new book, documentary, and series for television.