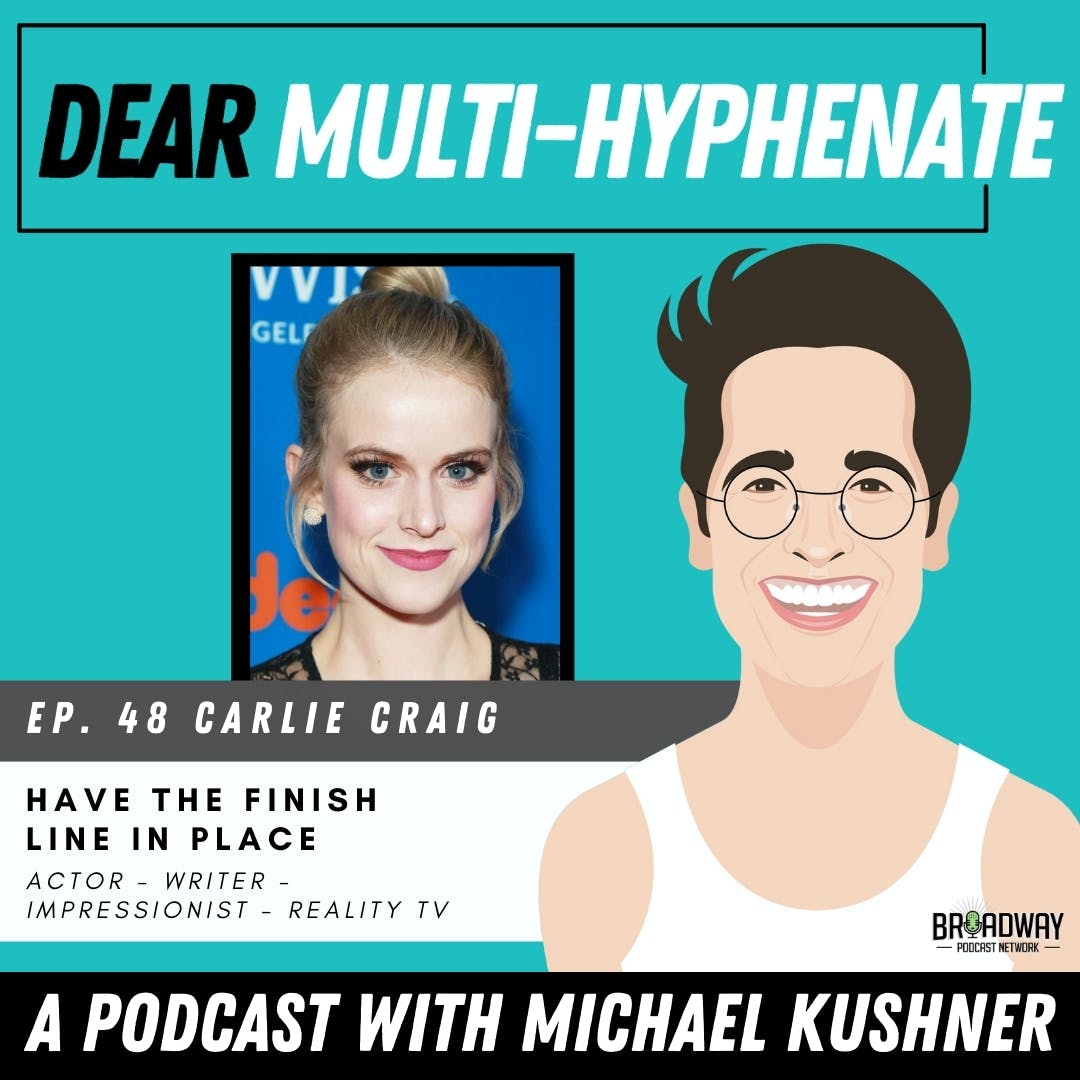 #48 – Carlie Craig: Have the Finish Line in Place

Carlie Craig (MadTV) and host Michael Kushner started their journey into the theatre industry together when they were young kids. Growing up doing theatre in a facility that houses national tours, music performances, comedians, fine art and more – it allowed us to be exposed to a plethora of different kinds of art.

The pandemic has caused many artists to revisit the things they know are true. And for Carlie, it’s back to the basics. Heading back to her home state of Florida, she’s not only spending a temporary time where she grew up but also spending time with the teachers who helped shape her.

After some personal road bumps and soul searching, Carlie found herself with an opportunity to invest in herself and her healing journey. It seems to be a pandemic theme, doesn’t it?

But when Carlie has a will, she finds a way, “What I’ve learned,” she says, “as long as you have some sort of finish line in place, everything else will work itself out.” Even when she booked 54 Below in NYC for a solo show before she even could afford a plane ticket, Carlie figured out a way to make it happen. After MadTV abruptly ended, Carlie listened to what she knew best… going back to the stage.

And that’s what this episode is all about — listening to what is true to you and following it through. Carlie’s vibrance is contagious, and truly, she makes you feel like everything is achievable, no matter what. After listening to Carlie’s stories of how she booked some of her biggest credits to date, anything actually is achievable.

Carlie Craig is an actress, singer and South Florida native who is most known for her work on the CW’s reboot of the iconic sketch show MADtv. Carlie moved to Los Angeles ten days after graduating from Florida State University with her Bachelor of Arts in Theatre & Media Production. She then began her work as assistant to Broadway star and YouTube sensation, Todrick Hall, which led to touring with him internationally as a singer & actress, starring in his hit MTV docuseries Todrick and serving as a vocalist on his groundbreaking visual album, Straight Outta Oz. Carlie gained online recognition with her video Celebrity Impressions, which has been viewed over 8 million times across multiple platforms. She then appeared on USA’s comedy competition show, First Impressions with Dana Carvey, where she wowed the SNL alum with her spot-on impersonations of Ariana Grande, Kristin Chenoweth and Emma Stone. Carlie has performed her all-original one woman musicals Have Several Seats and Me! The Musical! in cabaret venues across Los Angeles & NYC and cannot wait to bring her shows back to audiences again once we are all finally vaccinated. You can currently catch Carlie starring in Kevin Hart’s LOL Network comedy series The Donors, streaming now on lolnetwork.com