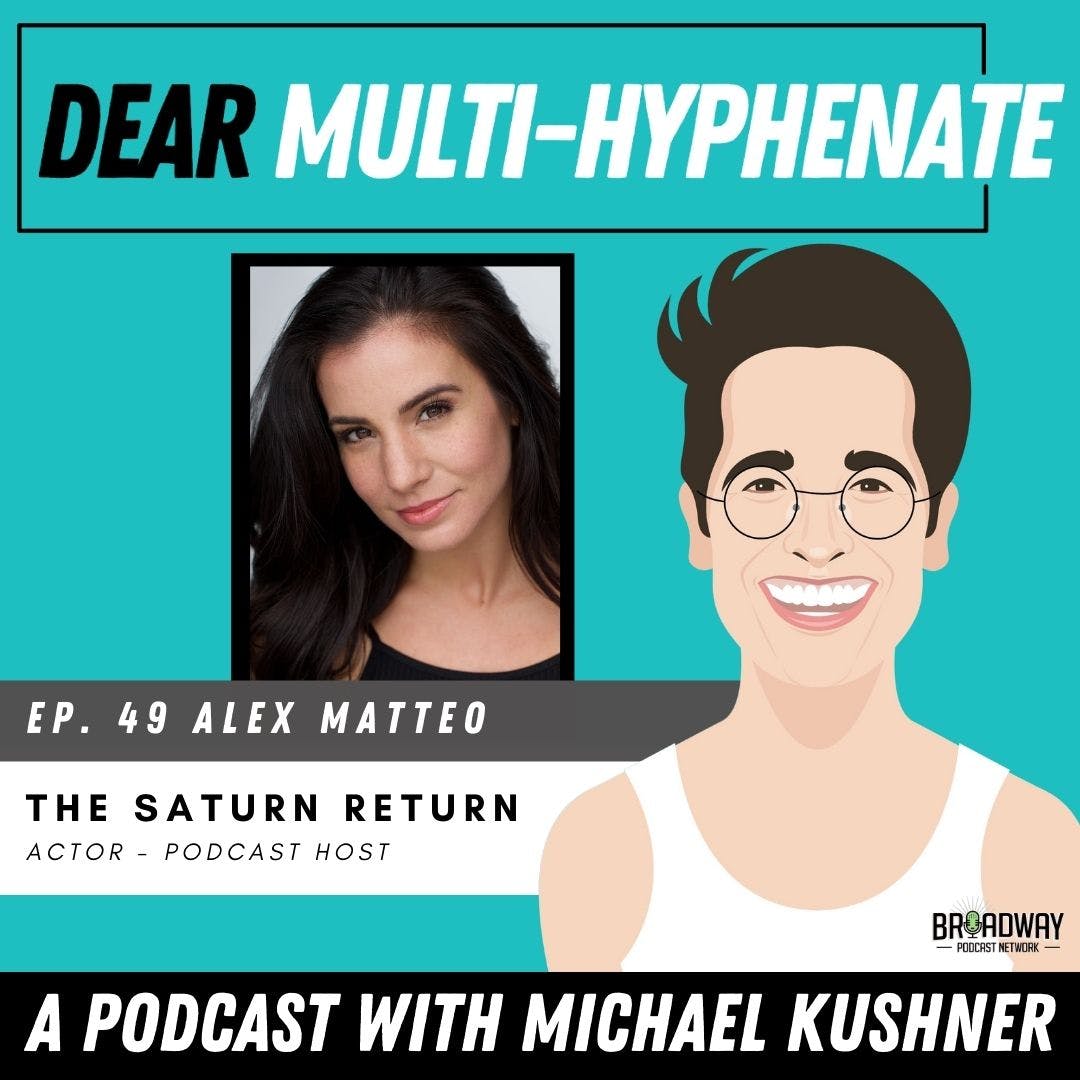 According to Alex, a multi-hyphenate is someone who sees the world and wants to offer their own prism.

All her friends think she’s crazy — with her crystals adorning her dressing room at the Stephen Sondheim Theatre on Broadway. But Alex brings up The Saturn Return, which is a personal change that happens in a human’s life around every 30 years. Connecting it to the theatre, she looks at it like the three acts of a person’s life.

Alex was fortunate when she graduated from The Boston Conservatory in 2011. She was asked by a professor what her dream was — and she responded with “paying bills as an actor.” But Alex realized after graduation, when she booked the national tour of The Addams Family, that she could not make her living touring on the road. She began to set new goals and boundaries on herself, but still risking burn out and approval from the rooms she was auditioning in.

“Around the Saturn Return time, I started to realize how much of that creative power I was giving away to other people,” Matteo says.

If you’re an artist, we check how the industry is perceived in the media and how it negatively and positively affects the expectations of young artists. This episode is chock full of inspirational information for starting a new project, establishing new goals and boundaries, self worth and productivity, being a Slave to the Muse, and unpacking the moments where we say, “There has to be more.”

“Your profession can’t be your everything,” continues Matteo. “You have to have other things that spark creativity within you. We are all creative beings and we all have this thread of creativity that runs within us, and I think that the people who are really successful, regardless of what you do, are people who have tapped into that creative energy and figured out how to work with it, as opposed to fight it.”

Alex Matteo – Broadway: Mrs. Doubtfire, A Bronx Tale, Annie (u/s Lily, Grace, Star to be) National Tours: Dirty Dancing (u/s Baby, Lisa, Elizabeth), Anything Goes, Addams Family (u/s Wednesday) Select Regional: 5th Avenue (doubtfire), Walnut Street/Riverside (Stephanie Mangano – Saturday Night Fever), MSMT (Stephanie Mangano – Saturday Night Fever), Goodspeed (A Sign of the Times), DTC (A Sign of the Times, u/s for Chilina Kennedy). Alex is a Broadway actor/woo woo enthusiast walking that fine line between surviving and thriving all while trying to give her dog Millie the life she deserves. After nearly a decade on Broadway Alex realized, true creativity stems from seeing the world that’s handed to us and offering back something more beautiful. Whether on stage, in the kitchen or at home, Alex is fueled by the belief that our unique creative lens is what brings people together. She is an avid supporter of crop tops, and it is said she can assemble the most impressive charcuterie board this side of the Mississippi. She is also the creator and host of the Pull It Together Podcast. Pull It Together pulls back the curtain on life as a creative. Each week Broadway actor, Alex Matteo sits down with multi-passionate creatives who are breaking the mold debunking myths of creativity. Whether through food, design, art or entertaining Pull It Together is your destination for creativity with an emphasis on finding beauty in the everyday.