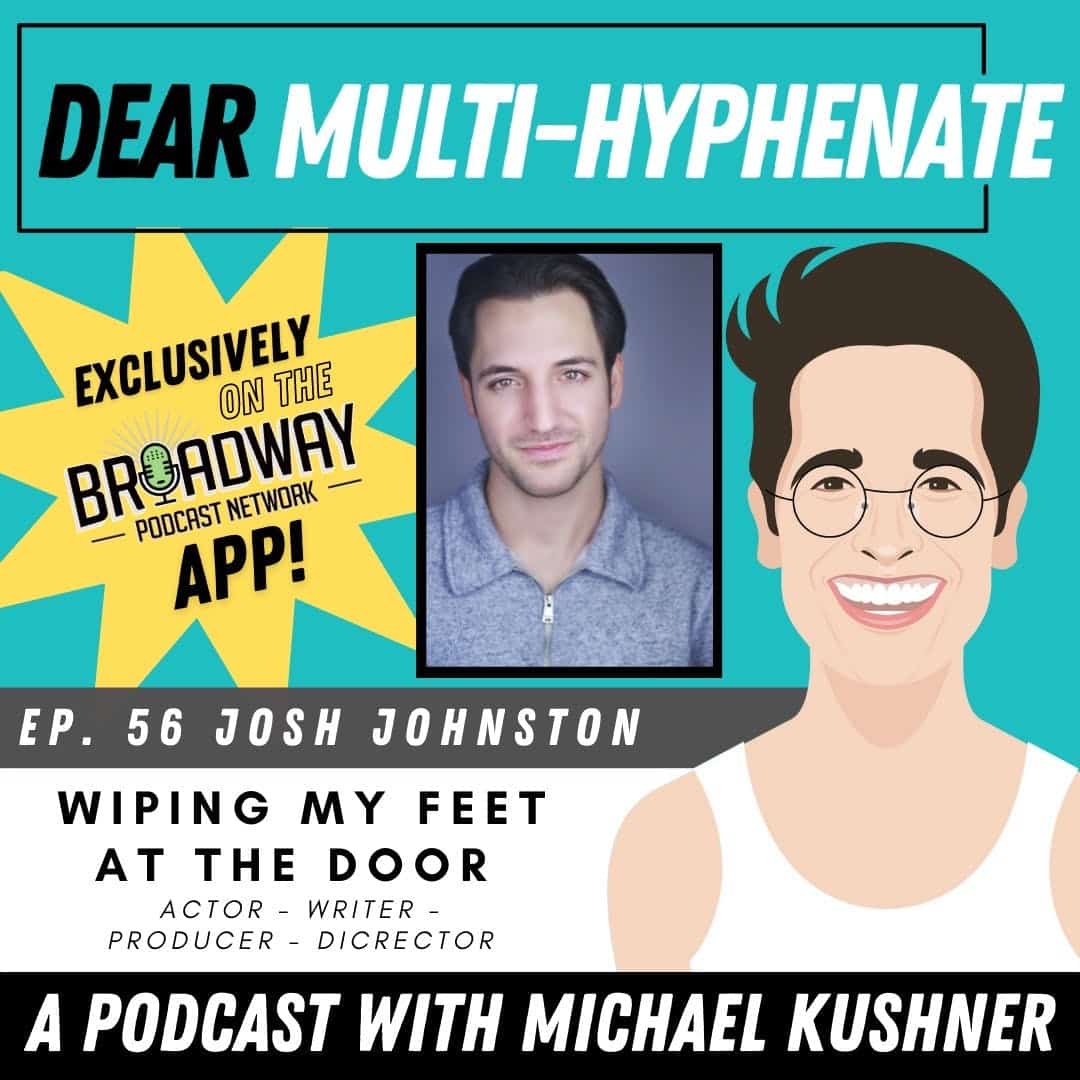 #56 – Josh Johnston: Wiping My Feet at the Door

Happy 2022, everyone! Born into a theatre family, Josh Johnston has a perspective on the industry fresh enough to start the new year right. One of the best things Josh promotes is his use of boundaries, something we all can implement more, especially since we’ve been so available thanks to the use of social media and Zoom.

“Sometimes I think we all need that space to decompress or find out Zen,” says Johnston. “I don’t do yoga and I don’t meditate. So, mine is just getting away from the phone and popping back into people’s lives when I’m around. And it’s a big ask for a friend to just be cool with that. I like wiping my feet at the door. I don’t like constantly being ‘on’ and having to go to sleep and wake up with my thoughts on what I need to do to survive and be creative everyday.”

Josh is a self proclaimed superfan of Dear Multi-Hyphenate and can quote many of the guests in previous episodes. He has a factual brain full of memories, facts, and statistics. I’ve tried to get him on the podcast before, but he’s declined until now, thanks to him entering a part of his career where he is actively producing, writing, and performing – especially now that his Radio Play Revival featuring Samuel L. Jackson, Jessica Chastain, Boyd Gaines, and more has been released.

On this episode, we follow the themes of doing what you know, understanding who you are, establishing boundaries to protect yourself and your art, making an art out of a trade, studying and applying craft, moving from coast to coast, and Josh’s wild relationships with for now jobs – like working the National Hot Dog Eating Championship. And students of the theatre listening to this episode? There are a lot of good nuggets to take away!

“I cannot sing Golden Age musical theatre eight times a week,” says Johnston. “I would be putting hundreds of people at risk. I’m wasting their time and their money and resources. There are better people for that job than me… and I know that. There are other things I can do.”

Josh Johnston is an actor and a writer, and now producer and director. Onstage, Josh toured with The Acting Company in their 40th season (Hamlet; Rosencrantz & Guildenstern Are Dead (directed by John Rando)), and has worked regionally; selected regional works include: The Merchant of Venice & Henry VIII at Valley Shakespeare Festival in Connecticut, The Cradle Will Rock in NYC (The Acting Company benefit at The Jacobs Theatre), and 5 shows at The Ravinia Festival in Illinois, including Passion, A Little Night Music (professional stage debut back in 2001!), and Annie Get Your Gun, all 5 Ravinia shows directed by Lonny Price. Josh is also a musician, playing bass at various Duplex Cabaret Theatre shows downtown, and subbing in for Billy Magnussen on guitar and vocals in Billy’s former band, Reserved For Rondee, at Rockwood Music Hall in NYC. During the pandemic, Josh moved to LA where he began pursuing work in TV and film; he most recently played a supporting role in the film TO LESLIE (post-production), directed by Michael Morris, and in the past, has worked on Season 1 of the show Benders, on IFC. Josh writes screenplays and TV scripts when he is not acting, because he cannot dance or coach singers or wait tables. He’s bad at all 3 of those things.