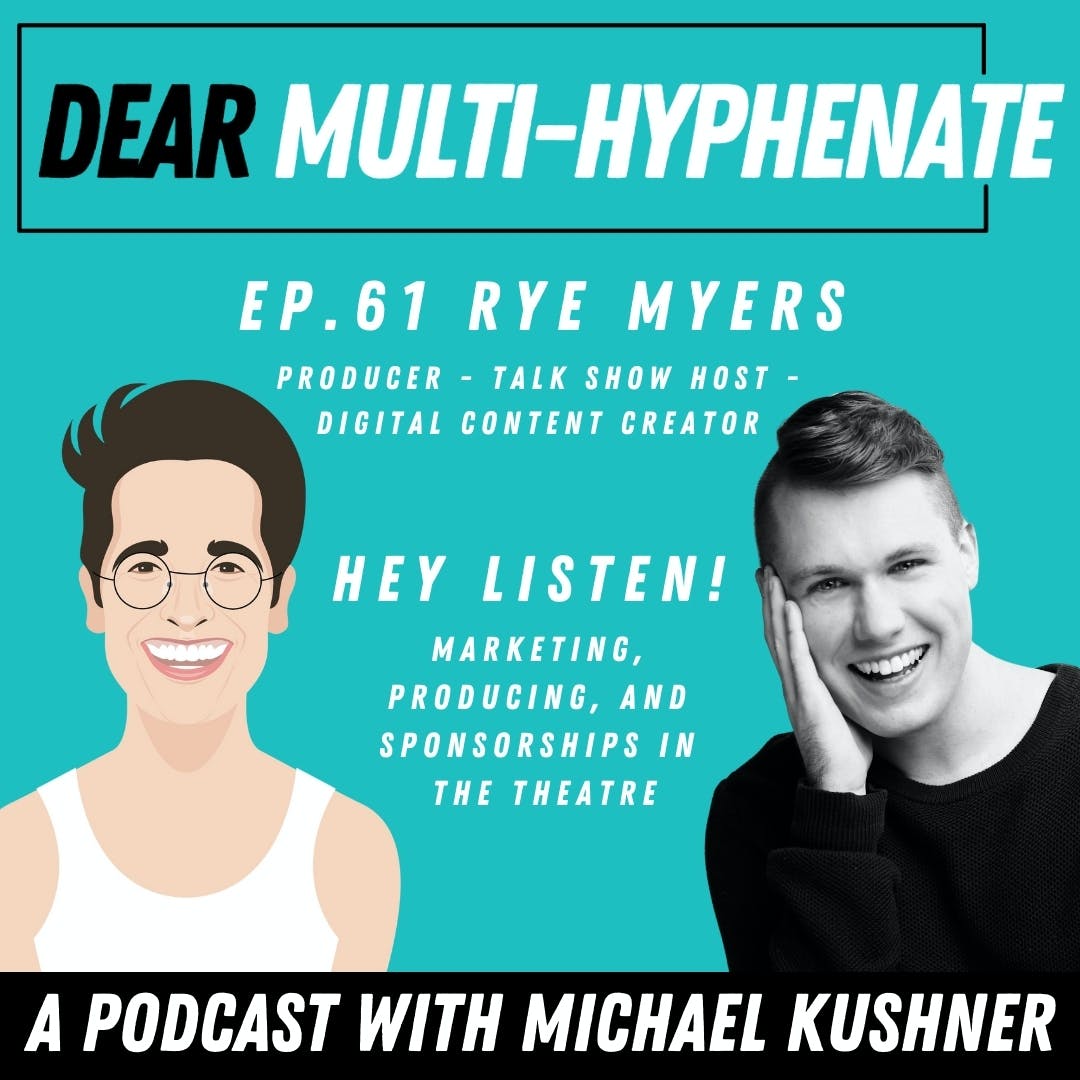 “I think with mistakes and failure, you really learn who the other person is. Sometimes failure and mistakes are more informative to who your people are because then you really see who you’re working with – the real people – and how they handle high stakes, handle drama, and handle problem solving.”

Ry Myers is a brilliant, accessible and adorable host and producer who somehow appears to be in more than one place in the industry at once. His brain moves a mile a minute, as do his words, and his effervescent energy is enough to lasso you in. This episode is all about opportunities and creating your own path, which is the basis of multi-hyphenating. Plus, get sneak peak insight of the new musical Paradise Square, coming to Broadway starting March 15th.

Myers is a graduate of Multi-Hype, Michael’s Multi-Hyphenate workshop (also created and led by Ashley Kate Adams and Kimberly Faye Greenberg) which he attributes to opening up his mind to anything being possible in this industry.

He has a very optimistic outlook about this industry, which is needed – and his point of view regarding mistakes is also positive. Could the industry benefit from more forgiveness? Possibly so. Mistakes can be made, and they are informative – acknowledgement and moving forward is key to growth in this industry.

Myers has his own show in Manhattan called Live with Rye & Friends on Broadway. Many fans and listeners of Dear Multi-Hyphenate often ask HOW do you start something? In this episode, Rye is chock full of knowledge on HOW to start a project. We cover finances, marketing, sponsorship, audience sizes, negative voices in our heads, and of course WHY he is producing and hosting this show.

“How I’ve set it up – I say the internet is a beautiful thing – I wanted shows to sponsor me,” says Myers. “I asked who works on X Broadway show and what is the marketing or advertising person for this show? And then it was just an email.”

Rye Myers is a talk show Host, Producer, and “Your Broadway & Entertainment BFF!”. He is the Founder of Rye Entertainment, LLC and RyeTheNewsGuy.com, the latter of which he has run for over six years. Rye’s infectious, energetic, and compassionate style to connect with people has landed him interviews with OSCAR, GRAMMY, EMMY, and TONY Award winners and big names in the industry, including Nathan Lane, Billy Porter, Susan Stroman, George Takei, David Hyde Pierce, Laura Benanti, Matthew Broderick, and many others! Rye has produced and hosted numerous video interviews, behind-the-scenes segments, award show round-ups, red carpet coverage, live events, and cabarets. Rye also works with other creatives in helping them interview celebrities, produce their dream projects, discover their passions, build their networks, and more.

He is also the Host and Exec Producer of Live with Rye & Friends on Broadway; the popular FREE Broadway-themed variety talk show at BAR 9 on Thursdays at 7:30 pm. The new talk show has taken the theater district by storm and is THE place to be on Thursday nights! Rye also Hosts and Producers “Live with Rye!” his digital streaming talk show series on YouTube that premieres new episodes every Tuesday at 6 pm. You can see all of his Hosting and Producing endeavors at www.RyeTheNewsGuy.com and www.RyeEntertainment.com. He also has an active social media presence so be sure to follow @rye_myers on Instagram, Twitter, and TikTok and LIKE /OfficialRyeMyers on Facebook.