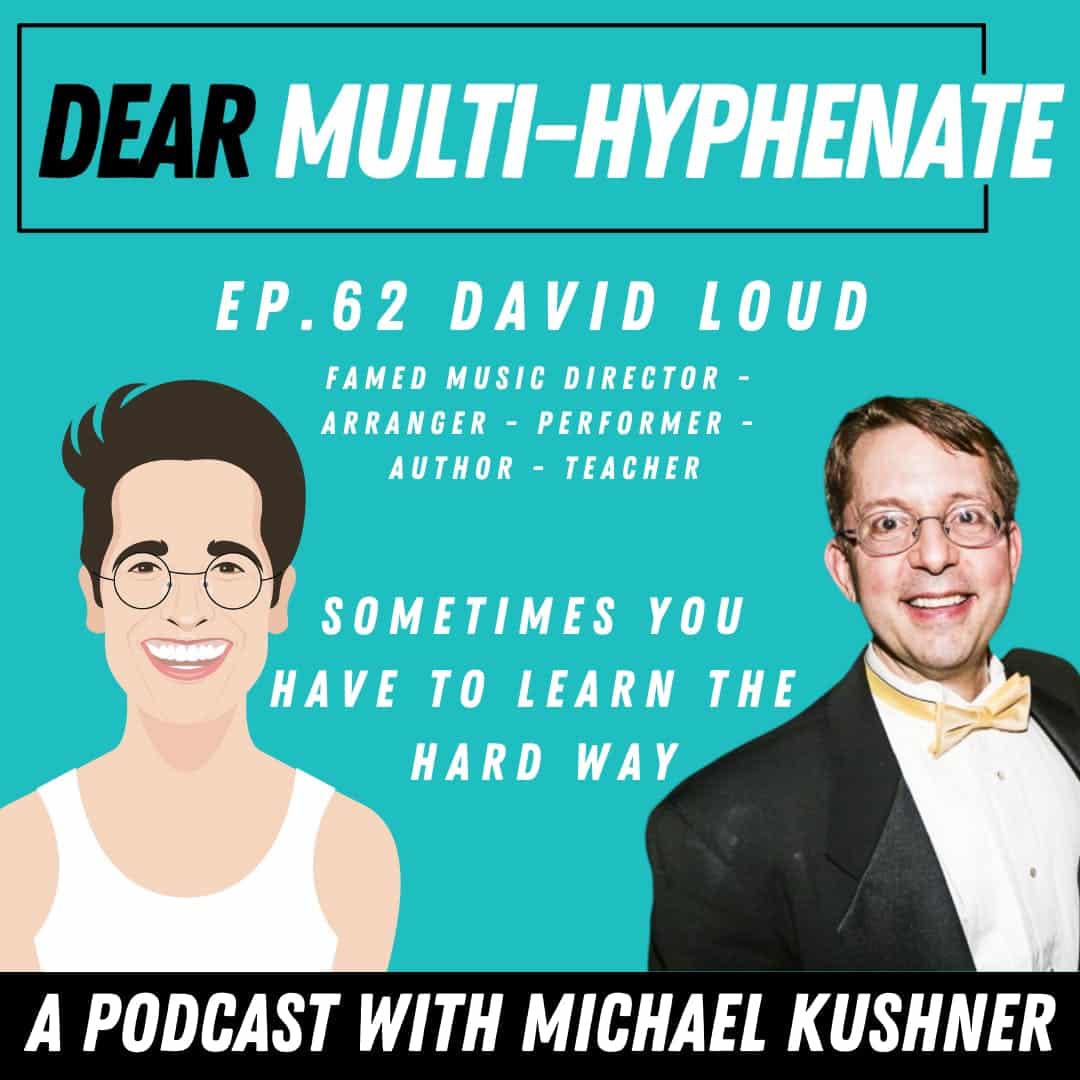 #62 – David Loud: Sometimes You Have to Learn the Hard Way

“To see your heroes fail,” continues Loud, “is to learn something really important at the beginning of someone’s career. Anybody can have a bomb. Anybody can flop. And to start out your career with a monumental flop, the way I did, boy do I appreciate a show that goes well and hits now!”

“That need to be in the theatre, that yearning to be in a musical or to work on a musical and have that be your life is so powerful,” says Loud. “And it bites us at different times in our lives. I knew for six years old what I wanted to do with my life and I never waivered.”

While Mr. Loud knew what he wanted, he still had to figure out how and where he belonged in the industry – which took him a few tried to make sure he was going down the right road. After his first Broadway musical, the legendary Merrily We Roll Along, flopped – he had to pivot. And now, in 2022, Mr. Loud continues to work with Parkinson’s disease, still figuring out ways to pivot and continue to tell his stories.

“I have always been a multi-hyphenate, I think,” says Loud. “I always found this niche for myself of the pianist who can say a few lines on stage. I’ve never quite fit into only one category. I love doing lots of different things in the theatre. I’ve always wanted to do everything in the theatre.”

And now, theatre lovers everywhere can read about Mr. Loud’s fantastic journey in show business. One can begin to understand what a multi-hyphenate’s life was life before the word multi-hyphenate grew in popularity.

“When we moved to New York to go into showbusiness – we were not graduates of musical theatre academies,” continues Loud. “We learned by doing and we learned from our friends and we learned by imitating and we went to auditions and we figured out what worked and what didn’t work. We had to be self-starters in that way.”

In this episode, we speak about our love for musical theatre, what it was really like to work with Stephen Sondheim, how multi-hyphenating stems out of need to be a part of any aspect of the theatre, his experience working on Merrily We Roll Along, casting choices that have excited us throughout the years, and the importance of failure.

David Loud occupies a unique place in Broadway history. In addition to his distinguished career as one of Broadway’s most respected music directors and arrangers, he originated three Broadway roles as an actor, including his appearance in the original cast of Stephen Sondheim’s legendary failure (and cult classic) Merrily We Roll Along, directed by Harold Prince. In a career spanning several decades, he served as music director for the original Broadway productions of Ragtime, Curtains, Sondheim on Sondheim, The Visit, The Scottsboro Boys, A Class Act, The Look of Love, and Steel Pier, as well as revivals of She Loves Me, Company, and Sweeney Todd. He also appeared alongside Zoe Caldwell and Audra McDonald in Terrence McNally’s Tony-winning play, Master Class.

About Facing the Music – Musical Director and arranger David Loud, a legendary Broadway talent, recounts his wildly entertaining and deeply poignant trek through the wilderness of his childhood and the edge-of-your-seat drama of a career on, in, under, and around Broadway for decades. He reveals his struggle against the ravages of Parkinson’s and triumphs repeatedly. This memoir is also a remarkable love letter to music. Loud is the ‘Ted Lasso’ of the theater business, ever the optimist. An inspiration to all!