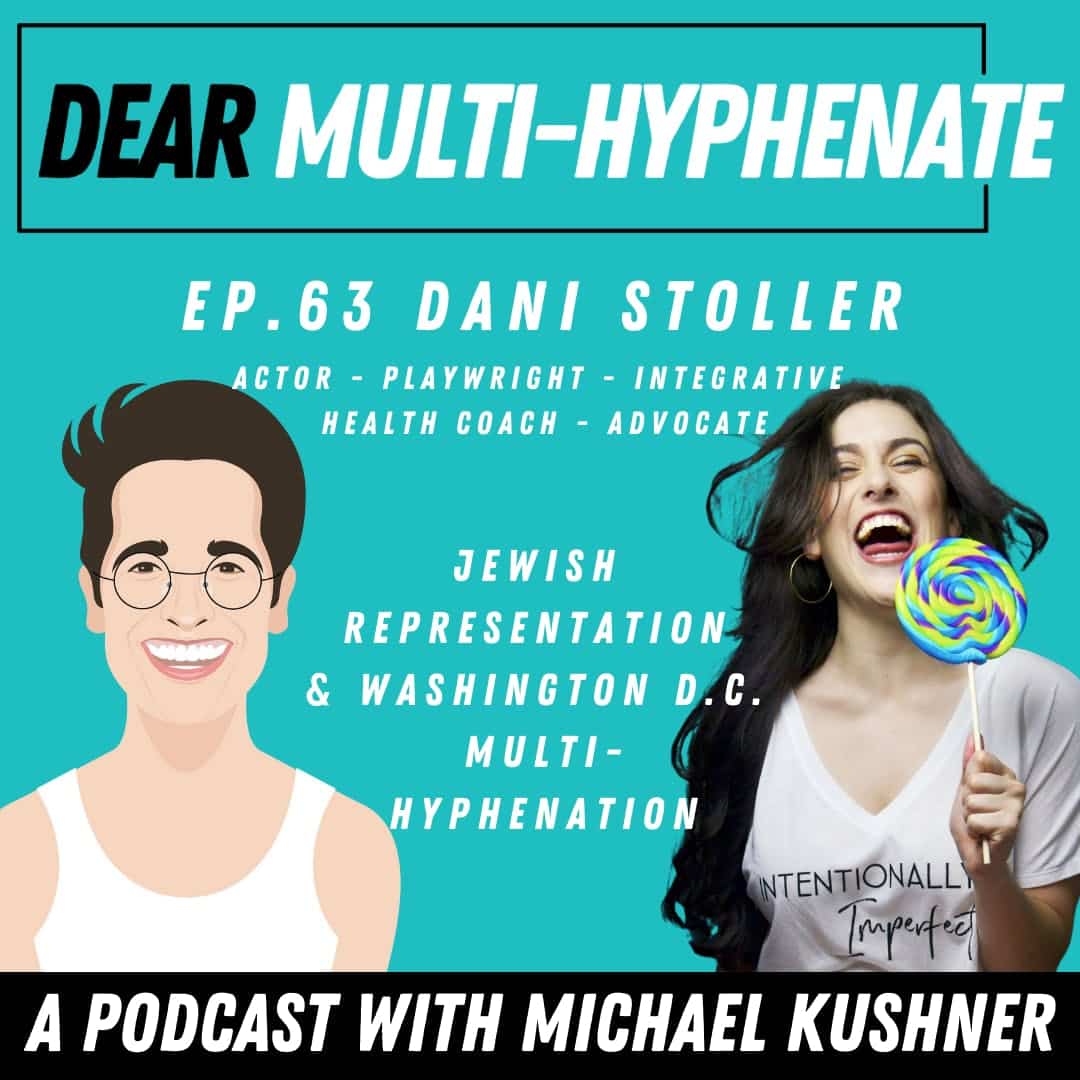 “For myself, I think for a long time I was worried that if I got my mental health and spiritual health in check… then I would lose the things that made me a really good artist.”

Dani Stoller is unapologetic. An actor who takes risks, it bleeds into her other hyphens of being a writer and producer. She approaches her art by forming her own figurative rep companies – and while based in the “DMV” area (D.C., Maryland, and Virginia) she has found that those communities create their own community, much like a rep company.

Following Dani on social media also reflects her unapologetic-ness… especially when it comes to Jewish advocacy. We dive deep into Jewish representation in the media – including non-Jews playing Jews, what we think Jews are ‘supposed’ to look like, and where they’re ‘supposed’ to be from.

“Throughout all conversations about Jewishness,” says Stoller, “Jews of color get written out of the conversation so quickly in terms of what does a Jew look like? Where is a Jew from? What is a Jew’s connection to anything – and so there’s this write out of that. What’s exciting is to see plays being written by Jews of color which shines a light on the incredible expanse of Jewish people. People think of Jews and they think of White, Ashkenazi Jew… they don’t think of Sefardi or Mizrahi or Swana or Beta Israel, or Igbo. We don’t think of it that way. Those stories are just as important.”

And speaking of these stories, Stoller explores how her next play, The Joy That Carries You, co-written with Awa Sal Secka, came to fruition and will have it’s debut at The Olney Theatre Center for the Arts. And how is this experience a reflection on socially responsible artistry?

“The thing I really admire about certain theatres in the ‘DMV’”, continues Stoller, “is their commitment to bringing in local talent. I think that we have a beautiful group of people there. Of course sometimes you have to bring in people from out of town. But I really do admire theatres who make a really diligent effort to utilize the people of that area to tell the stories of that area.”

While this podcast has lessons applicable to all artists in all locations, Dani shares her stories which have happened in the Washington D.C. theatre scene. Multi-hyphenating happens everywhere – and even if you’re in NYC, LA, or London – this episode is applicable to YOU! Other topics found in this episode are becoming a good apologizer, casting director relationships, and using the things that make us unique to tell our stories.

Dani Stoller is an actor, playwright, podcaster & Jewish advocate in Maryland by way of Brooklyn, New York. She has performed all across the DMV from the Folger Shakespeare Theater to the Kennedy Center. Her play, Easy Women Smoking Loose Cigarettes, had its premiere at the Tony Award winning Signature Theater in Shirlington, VA, and was featured in the New York Times at the beginning of the pandemic. Her upcoming play, The Joy That Carries You, co-written with Awa Sal Secka is opening this May at the Olney Theatre Center. When she’s not writing she hosts the podcast Zen & Sugar, which is centered on intuitive eating, balance, and healing disordered food and body relationships. Follow her on instagram @danidangerstoller or her website www.Danistoller.com