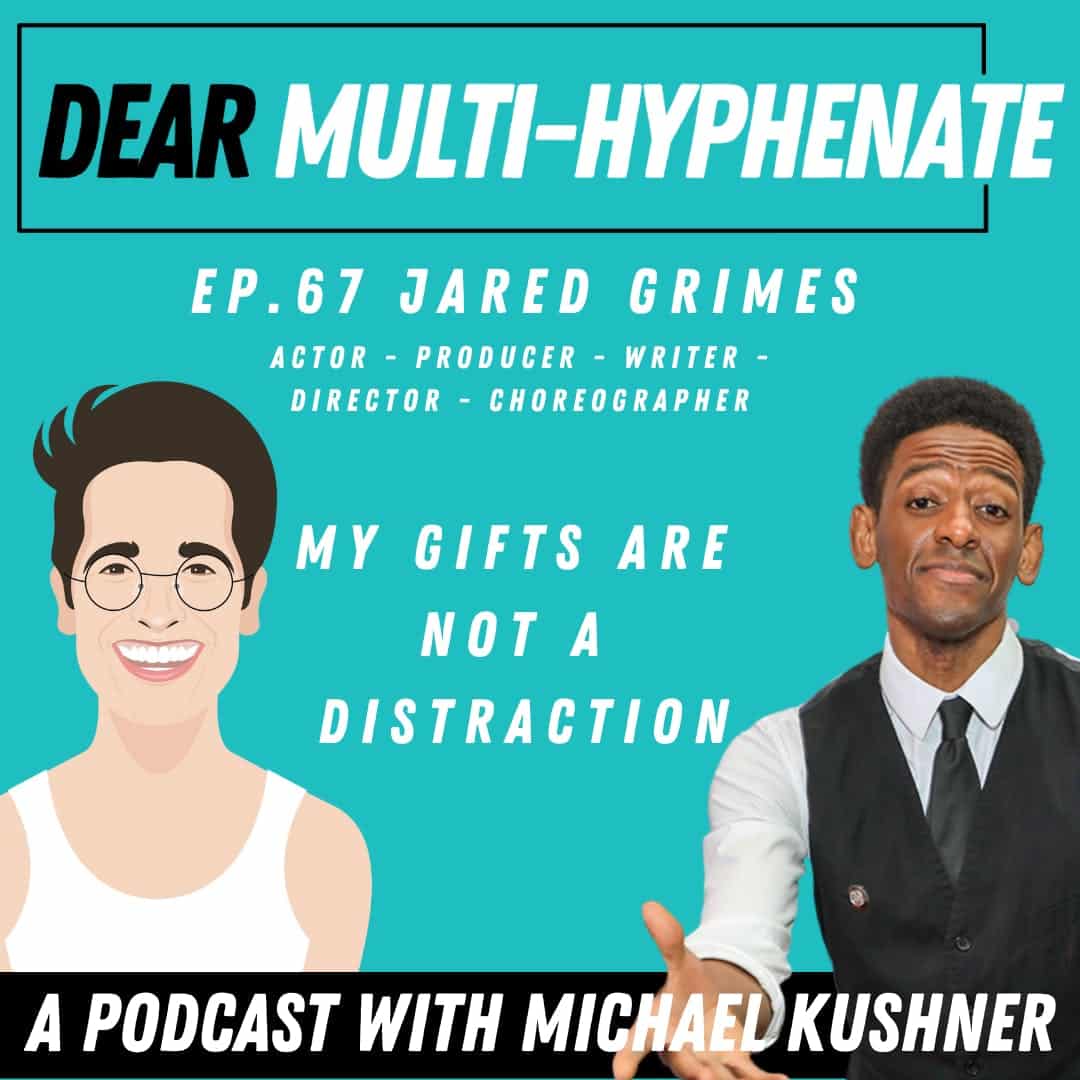 #67 – Jared Grimes: My Gifts Are Not A Distraction

“Being a multi-hyphenate is not a disability – it’s an ability. It’s an advantage.”

Jared Grimes is a Tony Nominated actor currently starring in Funny Girl on Broadway. His effervescent energy lights up the stage every night at The August Wilson Theatre. In this episode, his energy continues into our conversation as we discuss what being a “bag of tricks” in this industry actually means.

In this episode, we discover Grimes’ road to Broadway, how he turned his ADD diagnosis into multi-hyphenation, inspirations, getting people in power to understand the multi-hyphenate, and we chat about how tap opened up his eyes to the art of multi-hyphenating.

“At an early age I began to latch on to the idea that if you’re a tap dancer, that means you can be many things. It doesn’t mean that you just use your feet to connect with people or share with people. I’m looking at all my heroes and they are singing, they are acting, they are comedians, they’re lindyhoppers, they’re writers, they’re choreographers, they do camerawork – they are behind the camera, in front of the camera – all those guys did that and I was just like wow so that’s what it is to be a tap dancer. My earliest idea of what a tap dancer was, was a multi-hyphenate.”

Jared Grimes is a quadruple threat in the world of the arts where he is heavily making his mark in singing, dancing, acting, and choreographing. He received a Tony Nomination for his performance in Funny Girl on Broadway, which he is currently starring in. On numerous occasions, he has danced alongside legends such as Wynton Marsalis, Gregory Hines, Ben Vereen, Jerry Lewis and Fayard Nicholas. and also performed for Barack Obama and Ted Kennedy at the Kennedy Center. Most recently on Broadway, Jared could be seen in the Tony Award-winning production of A Soldier’s Play.

Grimes has toured with Musical legend, Mariah Carey, under the choreography of Marty Kudelka, and danced for artists such as Common, Salt-n-Pepa, Envogue, Busta Rhymes and the Roots. Jared’s theater credits include, After Midnight on Broadway directed by Warren Carlyle, Twist directed by Debbie Allen, Babes in Arms at the Goodspeed Opera House choreographed by Randy Skinner, Gentlemen Prefer Blondes directed by John Rando at Encores and Broadway Underground directed by himself.

In the world of acting, Jared is known for his recurring role of ‘Adrian’ on NBC’s hit show “Manifest.” He performed the lead role of ‘Jackson’ in the Annapurna feature film Swing Kids and Sammy Davis Jr.’s “Birth of the Blues” on Michael Feinstein’s American Songbook for PBS. Other film credits include Paramount’s, The Marc Pease Experience starring Ben Stiller, New Line Cinema’s Little Manhattan and Elevation Filmwork’s’ First Born starring Elizabeth Shue. Grimes has appeared in commercials for Coca-Cola, Subway, MTV and television shows such as CBS’ “Star Search,” “Showtime at the Apollo,” ABC Family’s “Dance Fever” and “The Jerry Lewis Telethon.”