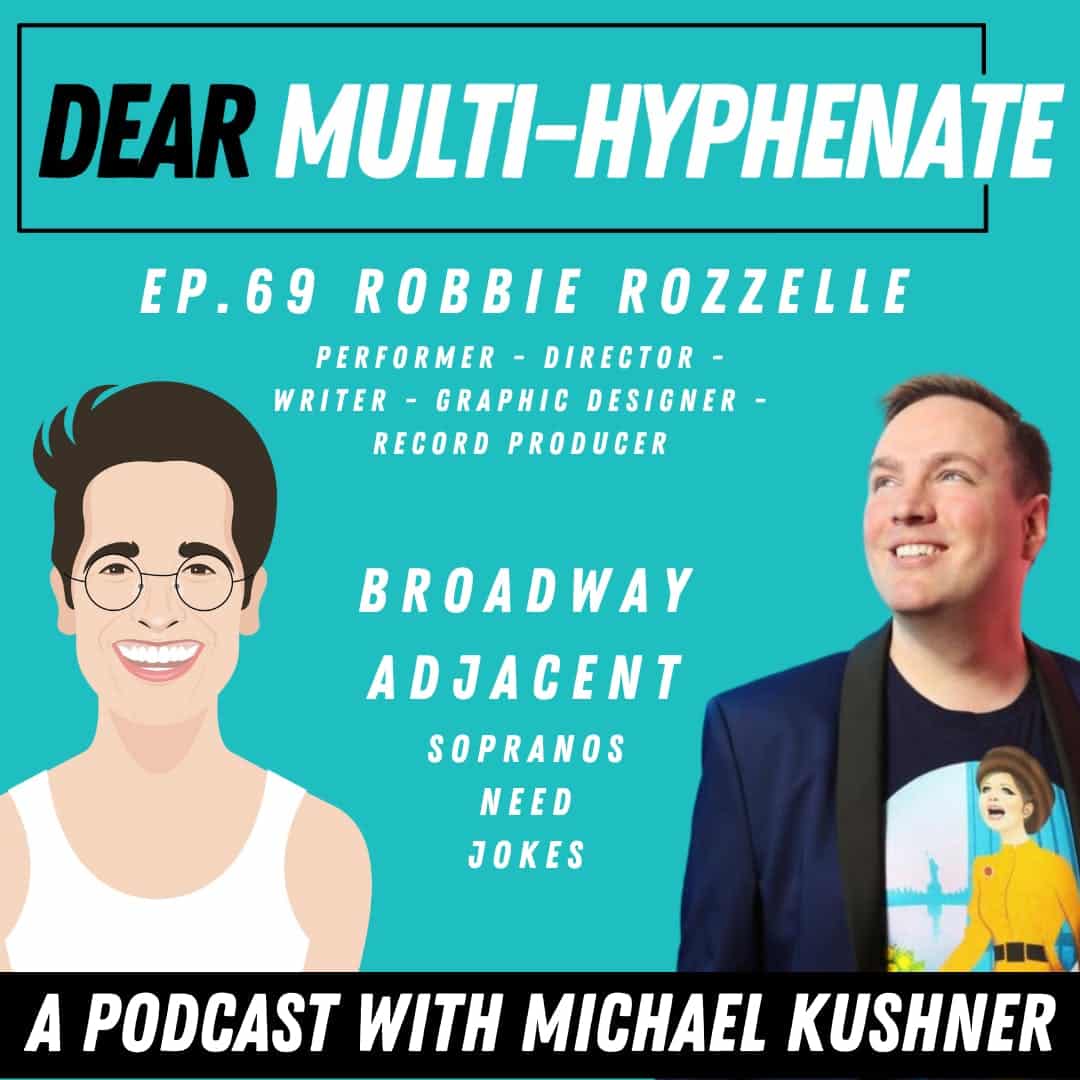 “You have to choose yourself and other people will choose you.” – Robbie Rozzelle on what he learned from the late Jan Maxwell.

There’s a lot of musical theatre references in this episode, folks. Proceed with caution!

Robbie Rozzelle is a beloved performer, director, writer, graphic designer, and record producer who is responsible for some of the funniest and touching moments in the cabaret space of recent. Rozzelle does shows all over the city… even across the pond in London. So how does he dominate the cabaret and concert scene?

“For me, I am very much a self starter. If I want to do something, I sort of will it into existence. A lot of that is a lot of cold emails. There are so many cold emails that I’ll send out, ‘Hi, I am beloved, fully ignored, cabaret sensation, Robbie Rozzelle.’ I’ll send the album and I’ll say, here’s the pitch. 9 times out of 10, I’ll never get an email back.”

But don’t worry, Robbie’s concerts sell out in 26 minutes. That isn’t an exaggeration. How does he do it? How does he sell his shows? If you’re interested in producing your own cabaret and concert, this episode is loaded with goodies to help you. We also chat about social media helping or hindering the industry, pushing through performances even during a crumbling political environment, understanding that what we bring to the table in the industry is allowed to be specific, and the difference between a Renaissance person and the multi-hyphenate.

Robbie infiltrates the industry in such an interesting way, He has also directed and written or co-written sold-out cabaret shows for Tony Award nominee Melissa Errico (Amour), Tony nominee Kate Baldwin (Finian’s Rainbow), Elena Shaddow (The Visit), Nikka Graff Lanzarone (Women on the Verge of a Nervous Breakdown), Mauricio Martínez (On Your Feet), Nathan Salstone (Harry Potter and the Cursed Child), RuPaul’s Drag Race contestant Mrs. Kasha Davis, and frequent collaborator Jessica Vosk (15th Anniversary Elphaba in Wicked). In 2017, he sold out Feinstein’s/54 Below twice with his debut cabaret solo act, “Songs From Inside My Locker”, which was nominated for a BroadwayWorld Cabaret Award (in addition to nominations for Best Director). He returned to Feinstein’s/54 Below in 2018 to headline Pride weekend with his new show “Bustin’ Out”, selling out and earning rave reviews. He recorded his debut solo album of “Songs From Inside My Locker” live in front of two sold-out audiences in 2019; the album was released to rave reviews in June 2020. He also created and hosted “Tuesdays at 54… with Robbie Rozelle!,” which ran for seven months at Feinstein’s/54 Below in 2019-2020. Robbie is a Grammy voting member, and appears on the concert cast recording of Mia Moravis’ Session Girls. For three years, Robbie served as the graphic designer and creative director for Playbill, culminating in the design of the branding of #PlaybillPride, a 30-day initiative of the LGBT movement in the theatre that included a redesign of their historic logo for the month of June 2014, which continues each June to this day. He currently serves as the A&R Director and in-house designer for Grammy-winning record label Broadway Records, where he designed the iconic “What the World Needs Now is Love” in response to Pulse nightclub shooting in Orlando. He also runs Ghostlight Design. When not designing, he can usually be found tweeting jokes and random musings at @divarobbie.