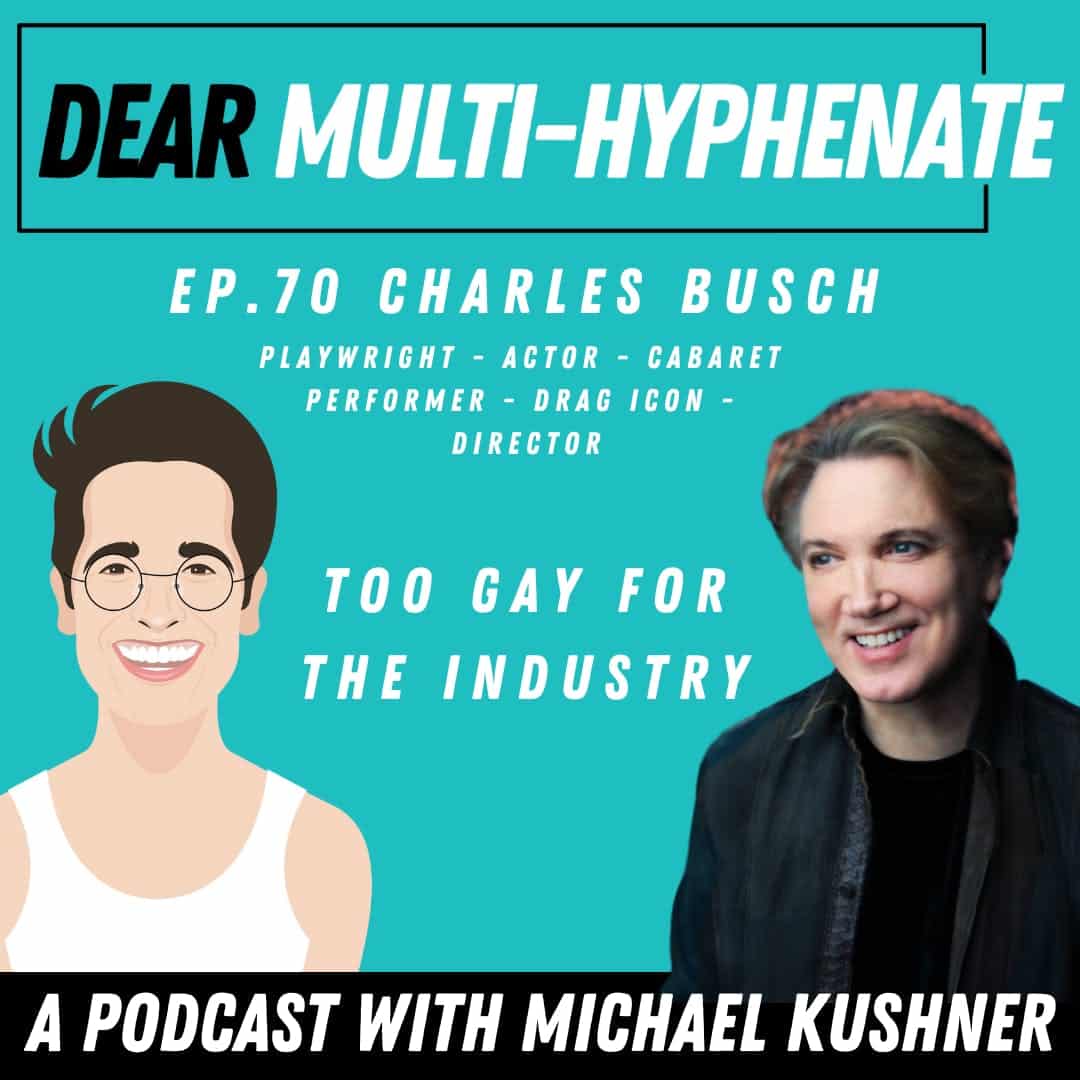 #70 – Charles Busch: Too Gay for the Industry

“I’ve been blessed with a somewhat pragmatic view, and I had a good sense of who I was and what I had to offer.”

Charles Busch has been around a while… and in the meantime. He is one of the first self-producers and self-advocates in the industry. Since he was eleven, he was writing three act places and found out very early at Northwestern that he would not find success in mainstream showbusiness. “Too gay” for the industry in the 70’s he says… so maybe the things that made him uncastable and unemployable could actually be what brings him success.

Even after going to an incredible acting program, Busch still didn’t feel he was able to find himself in the industry. He sold numerous pilots to networks, but still found himself back to putting on a show with people he loves. And sometimes even finding himself in places at the top of the food chain (like writing a book for a new musical) and saying to himself, “I really hate this!” And yes, we talk about Taboo, one of Broadway’s biggest flops. We also talk about his huge success on Broadway, The Tale of the Allergist’s Wife.

Charles also takes us down discovery lane as he found his love of drag, cabaret, a symbiotic relationship with his beloved manager, taking the road less traveled, and the upcoming 54 Below show, Backstage Babble, which he’ll be appearing in on September 6th at 7pm.

Charles Busch has forged a unique place in the world of entertainment as playwright, actor, director, novelist, cabaret performer and drag icon. He is the author and star of over twenty-five plays including The Divine Sister, The Lady in Question, Red Scare on Sunset, The Tribute Artist, The Confession of Lily Dare and Vampire Lesbians of Sodom; one of the longest running plays in the history of Off-Broadway. His play The Tale of the Allergist’s Wife ran for 777 performances on Broadway, won the Outer Circle Critics’ John L. Gassner Award for playwrighting, received a Tony nomination for Best Play and is the longest running Broadway comedy of the past twenty-five years.

He wrote and starred in the film versions of his plays, Psycho Beach Party and Die Mommie Die, the latter of which won him the Best Performance Award at the Sundance Film Festival. For two seasons, he appeared as Nat Ginzburg on the HBO series OZ and is the author of the auto-biographical novel Whores of Lost Atlantis. He has directed two films; the Showtime short subject, Personal Assistant, and a feature, A Very Serious Person, which won an honorable mention at the Tribeca Film Festival. Due to his love and knowledge of film and theatre history, he has appeared as a guest programmer and in numerous documentaries for Turner Classic Movies, and has lectured and conducted master classes at many colleges and universities including NYU, Harvard, UCLA and Amherst College. In 2003, Mr. Busch received a special Drama Desk Award for career achievement as both performer and playwright and was given a star on the Playwrights Walk outside the Lucille Lortel Theatre. He is also the subject of the acclaimed documentary film The Lady in Question is Charles Busch.

He is a two-time MAC award winner and has performed his cabaret act in many cities including San Francisco, Los Angeles, Chicago, New Orleans, Philadelphia, London, Paris, Barcelona and New York. In winter of 2016, his show The Lady at the Mic premiered at Jazz at Lincoln Center’s American Songbook series. His first CD, Charles Busch Live at Feinstein’s 54 Below, was released by Broadway Records.