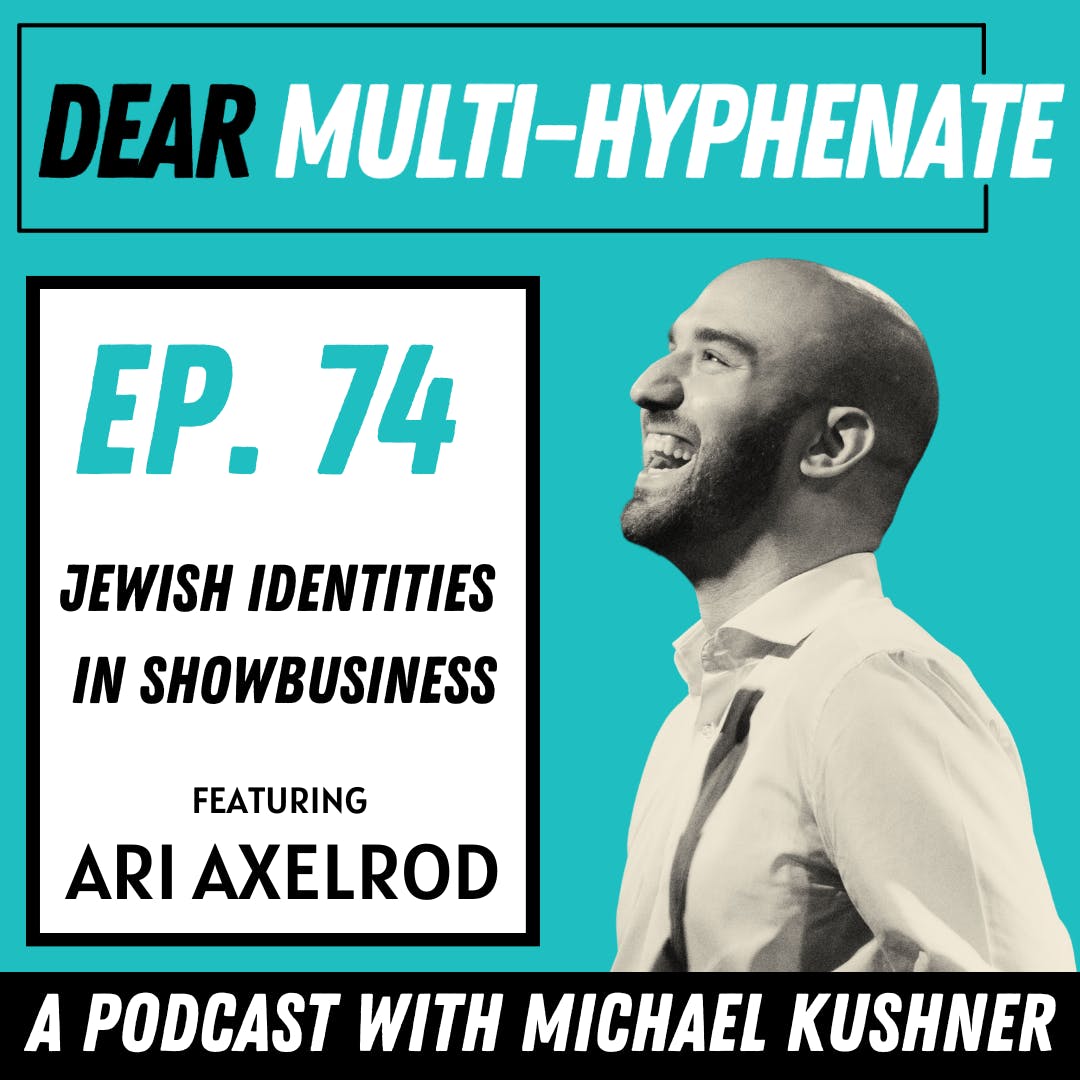 This episode is special. I mean… really special. Ari Axelrod is an artist and I’ve seen him in action, growing throughout the years. The episode is sort of broken down into three parts. What crafts a great cabaret? Our views on the multi-hyphenate. And Jewish identities in showbusiness, which is a huge topic of conversation right now.

When it comes to cabaret, according to Axelrod, cabaret should be perfectly imperfect. It is the art of being yourself on purpose. So what are the pitfalls an artist creating a concert or cabaret can run into? What is the purpose for which you’re doing one? How can you best prepare? And what does it really mean when you choose not to memorize your lyrics…

“I want to hear the lyrics as you. I don’t want to hear it as the song because I’ll tune out. It’s the difference between being a tour guide and a travel agent. A tour guide says, “Let me show you all of the things. Let me facilitate your journey. The travel agent says, ‘Where do you want to go? I will help you go to wherever you need to go.’”

When it comes to the multi-hyphenate, it’s simple to Ari. “It reminds me of what you said before. Straight, cis, white men – they have the keys to the door,” says Axelrod. “People who come from marginalized communities, and whatever marginalization that is, they have to find other ways into the building. And sometimes it means having multiple ways in because the front door is locked for them. So we have to climb through the window, or go through the chimney, or building another building. It’s exactly what you’re saying, that’s what being a multi-hyphenate is. It’s telling our stories in all of the ways, flexing all of our artistic muscles and integrity, to be able to reflect the full capacity of our world.”

And the most important topic of this episode – what it means and feels like to be Jewish today. And how does that relate to our work in the industry? Anti-semitism, unfortunately, is rearing its ugly head once again. So, how do respond to it? And more importantly – how do we stop it?

“Anti-semitism looks different on the left than on the right. It looks different here. Everywhere. I think the thing that people don’t understand – the main problem, specifically, within our industry is that there is a lack of education in terms of what a Jew looks like. What a Jew is.”

Ari is an actor, director, singer, and Jewish activist. He recently received the 2022 Bistro Award for Theatrical Performance in Song for his show, “Ari’s Arias.” His award-winning show, “A Place For Us: A Celebration of Jewish Broadway,” began with a sold-out run at the historic Birdland Jazz Club, featuring six-time Emmy & Tony nominee Tovah Feldshuh, and has since grown to international acclaim performing to sold-out audiences around the world. In 2020, he received a MAC Award nomination for Best Male Vocalist and won the BroadwayWorld Award for Best Live Zoom Performance. Ari Axelrod’s first solo show, “Taking the Wheel,” directed by Tony Award winner Faith Prince, and music directed by multiple MAC Award winner Alex Rybeck, has been performed in numerous cities around the country. Ari’s work as a director has been seen at the Tony Award-winning Paper Mill Playhouse, Birdland Jazz Club, 54 Below, and The Green Room 42.

Ari is a recipient of The Jewish Week’s prestigious 36 Under 36 Award, which “honors 36 noteworthy Jewish leaders, all 36 years old or younger, who make New York — and its many Jewish communities — better. These entrepreneurs, young leaders, and changemakers bring remarkable energy and new ideas to religion, philanthropy, the arts, Jewish learning, campus life, social action, inclusion, and justice.