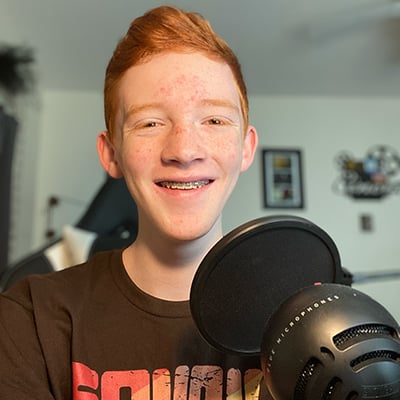 Mason Bray is a high school student and Midwestern Theatre LOVER! For over half of his life he has performed in local Southern Indiana productions such as INTO THE WOODS (Jack, People’s Theater of Southern Indiana), WILLY WONKA (Charlie Bucket, Children’s Theatre of Southern Indiana), YOUNG ABE LINCOLN 30th ANNIVERSARY (Ensemble, Actors Community Theatre), HERE I GREW UP (Boy Nat, Actors Community Theatre), LORD OF THE FLIES (Simon, Evansville Civic Theatre). He joined the school choir in 2018 and in 2020 he was awarded the Fred Waring’s Director’s Award for Chorus by Jennifer Pruden. As part of the Thespian Troupe at his high school, he has performed in their productions since 2014 with roles including HIGH SCHOOL MUSICAL (Ryan Evans), SEUSSICAL (Wickersham Brother 1), THE CURIOUS SAVAGE (Titus Savage), and other ensemble roles.

He has also gone backstage and worked as the lighting designer, stage manager, assistant director, technical director, etc. in several other local/regional productions. On top of the crew and technical aspects, Mason helps his mom as the Technical Director at his old middle school where the Drama Club puts on a show each school year!

In May 2020, Mason was feeling empty without theatre anywhere in the world, and started to brainstorm what he could do to bring theatre to theatre-lovers like him! He started by messaging his friend Gabriella Marzetta that he met on the Second National Tour of WAITRESS, and asked if she would be willing to talk about her career and give advice on his show. She said yes! After that, he started reaching out to his past directors and built himself up to asking people from Broadway, Television, and Music industries to get advice on the industry he wants to break into! And now in mid-2021, he is still reaching out to AMAZING artists every day in order to schedule interviews!