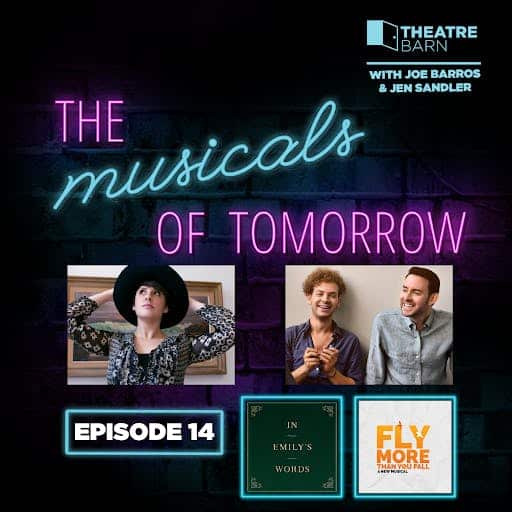 This episode features discussions about Jessy Tomsko’s In Emily’s Words and Eric Holmes and Nat Zegree’s Fly More Than You Fall. Tony Award nominated producer and New York Theatre Barn board Co-President Blair Russell is featured as a guest co-host on this episode.

IN EMILY’S WORDS (by Jessy Tomsko) – In Emily’s Words, a new musical about the power of the human imagination, tells the story of English novelist Emily Brontë as she is writing her magnum opus: Wuthering Heights. Emily’s imagination knew no bounds, and in spite of having seen very little of the world, she was able to craft a sweeping melodrama that has left a legacy nearly 200 years after her death. Emily Brontë fought through adversity and illness, achieving agency in a time when women were denied it. Yet while she paved the way for female writers, Emily never lived to see the success of her own labors. Hers is a story of resilience, strength, and the greatness that can be achieved when the immense power of imagination is unleashed. Jessy was also joined by her director Avital Asuleen.

FLY MORE THAN YOU FALL (by Eric Holmes and Nat Zegree) – Fly More Than You Fall introduces a young girl, Malia, who deals with the tragic news of her mother’s diagnosis in the only way she knows how – through her writing. Malia crafts a tale of a young bird with broken wings who embarks on the journey of a lifetime, continually weaving in and out of Malia’s real-life struggles to navigate grief, puberty and growing up in the middle of nowhere.