Get Onto My Cloud has host, Sir Tim Rice, at his chatty witty best, where he talks about his career in theatre and music, his colleagues and friends (plus the odd foe) and sometimes roams off stage to discuss other important matters in his life such as cricket, astronomy, Sunderland FC and boxer dogs.

You can also expect to listen to recordings of some of his favourite lyrics (not always the obvious ones) and he reveals how and why some shows worked brilliantly and some didn’t.

Sir Tim Rice wrote the lyrics for Joseph and the Amazing Technicolor Dreamcoat, Jesus Christ Superstar, Evita, Chess and The Lion King, to name but five.

The composers he has worked with include Andrew Lloyd Webber, Elton John, Alan Menken, ABBA’s Bjorn and Benny and Freddie Mercury. 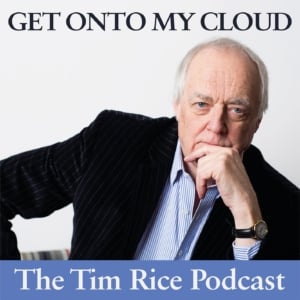 Tim remembers the late Darius Campbell Danesh who starred in his musical From Here To Eternity. He also recalls a 1974 album he and Andrew Lloyd Webber produced for the fine singer Maynard Williams. Learn ...
September 8, 2022

Joseph at the Edinburgh Festival: Then and Now

Am I Still Working?

Tim apologises for taking time to get round to Podcast 65 but has a reasonable excuse: working on three of his favourite golden oldies.  Learn more about your ad choices. Visit megaphone.fm/adchoices ...
August 8, 2022

It’s 1955. Tim hears American radio for the first time in his life - in Japan - and is immediately captivated by radio, hit records, and the charts. And religion, sort of.  Learn more about your ad ...
April 12, 2022

Way way back half a century ago part 3

Tim takes a further look at the original Joseph album that he and Andrew recorded in 1968, criticises his own lyrics (but not too harshly), plays the rarely heard second Pharaoh song and how Children of ...
April 5, 2022

Way way back half a century ago part 2

Tim tackles one of the questions he’s most often asked - would you change any of your old lyrics if you could, or if you were writing them now? Well, yes and no. He investigates changes he could have ...
March 27, 2022