Jake Blouch (Producer, Composer, Guitarist, Voice of Edgar Hawke) is a Philly-based actor, song writer, voiceover artist and future President of the United States. He has performed in theaters across the Philadelphia region, and even a couple times in Delaware! In addition to his “career” as an actor, his songwriting and musical projects include his parody band Jawbone Junction, which aims to give Southern Rock the Spinal Tap treatment (Steve Gudelunas on the drums).  His original musical Something Like a War was commissioned by 11th Hour Theatre Company, and received a showcase reading in 2019.  For his turn in their production of See What I Wanna See, he won the Barrymore Award for Outstanding Supporting Actor in a Musical.  He lives in South Philly with his true love, his wife Sophia, and her true love, their dog Teddy, and cats Tobias and Sister Aloicius.

Lillian Castillo (Voice of Jocasta Stormwood) is a Chicago-based actress and life long gamer. Her passion for theater and games found its perfect intersection when she was introduced to table top RPGs in college. It was love at first role! She and her husband have just welcomed a new family member, William, into the world!

Steve Gudelunas (Resident Drummer, Voice of Roscoe Chubb) is a Philadelphia-based vocalist, drummer, and actor. He is also one of the creators of Mythic Thunderlute. Steve lives at home with his wife Rebecca, dog Lola, and cats Amani and Smokey.

Alex Keiper (Producer, Chief Story Editor, SFX) is wife/writing partner to Michael Doherty, our Game Maker. She’s an actor/director who’s worked all over the country at companies such as The Utah Shakespeare Festival, Milwaukee Rep, Actors Theatre of Louisville, The Arden Theatre Company, Philadelphia Theatre Co, 11th Hour Theatre Company and many more. She’s thrilled to be joining the greater podcast community and can’t wait for the world to be taken over by Mythic Thunderlute!

Dan Kazemi (Producer, Composer, Underscoring, Mixing/Mastering) is a New York-based composer, actor, director, music director, educator and is an Associate Artist at Milwaukee Repertory Theater. His directorial work has been seen at Milwaukee Rep with the hit productions of Ain’t Misbehavin’ and Ring of Fire. His recent musical direction credits for Milwaukee Rep include In the Heights, The All Night Strut!, Murder for Two, Guys and Dolls, Man of La Mancha and Dreamgirls. In Philadelphia, Dan recently musically directed Lizzie (Barrymore Award), Herringbone (Barrymore Nom), and orchestrated and musically directed the world premiere musicals, Field Hockey Hot (Barrymore Nom) and Tulipomania. Dan’s music has been performed at the Cirque de Demain in Paris, Ballet Fleming and in the 213 collective’s collaborations Untitled Project #213 and Your Attention Please!. Dan is also the composer of a new musical, The Tapioca Miracle.

Sarah Royds (Social Media Coordinator) is a graduate from the class of 2019 at Washington and Jefferson College with a dual degree in English and Communication Arts with an emphasis in Theatre. She has spent the last year interning at theatre companies across the Philadelphia region, including: People’s Light Theatre, 11th Hour Theatre Company, and Shakespeare in Clark Park. Sarah loves to spend her free time with her kitty boys, Greyjoy and Gandalf. And a fun fact about Sarah: she has dyed her hair every shade of the rainbow!

Judd Mellinger-Blouch (Marketing Consultant) Judd’s most noteworthy accomplishment is marrying Ellen Mellinger-Blouch and doing his small part in producing Jake Blouch and his much cuter sister, Leah. Beyond that, Judd has worked in healthcare public relations, marketing, and workforce development for 35 years. 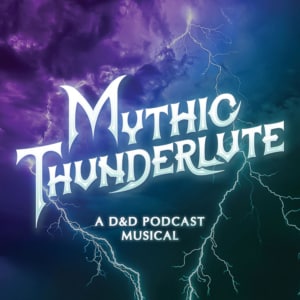 S1E5: The Temple of Vanitius

The band meets their sovereign, who introduces them to his only superior ...
September 27, 2021

S1E4: The Trial of the Boarstead 5

Shoot the Lute: A Look Inside Episode 3

Game Maker Michael Doherty and Co-Producer Alex Keiper discuss the most recent episode in this glimpse into the behind-the-scenes Patreon Exclusive, Shoot the Lute ...
September 6, 2021

S1E1: The Plea of the Wood Nymph

The journey begins. Pugface, Edgar, Roscoe, and Jocasta set off to save Edennia from certain doom ...
July 26, 2021