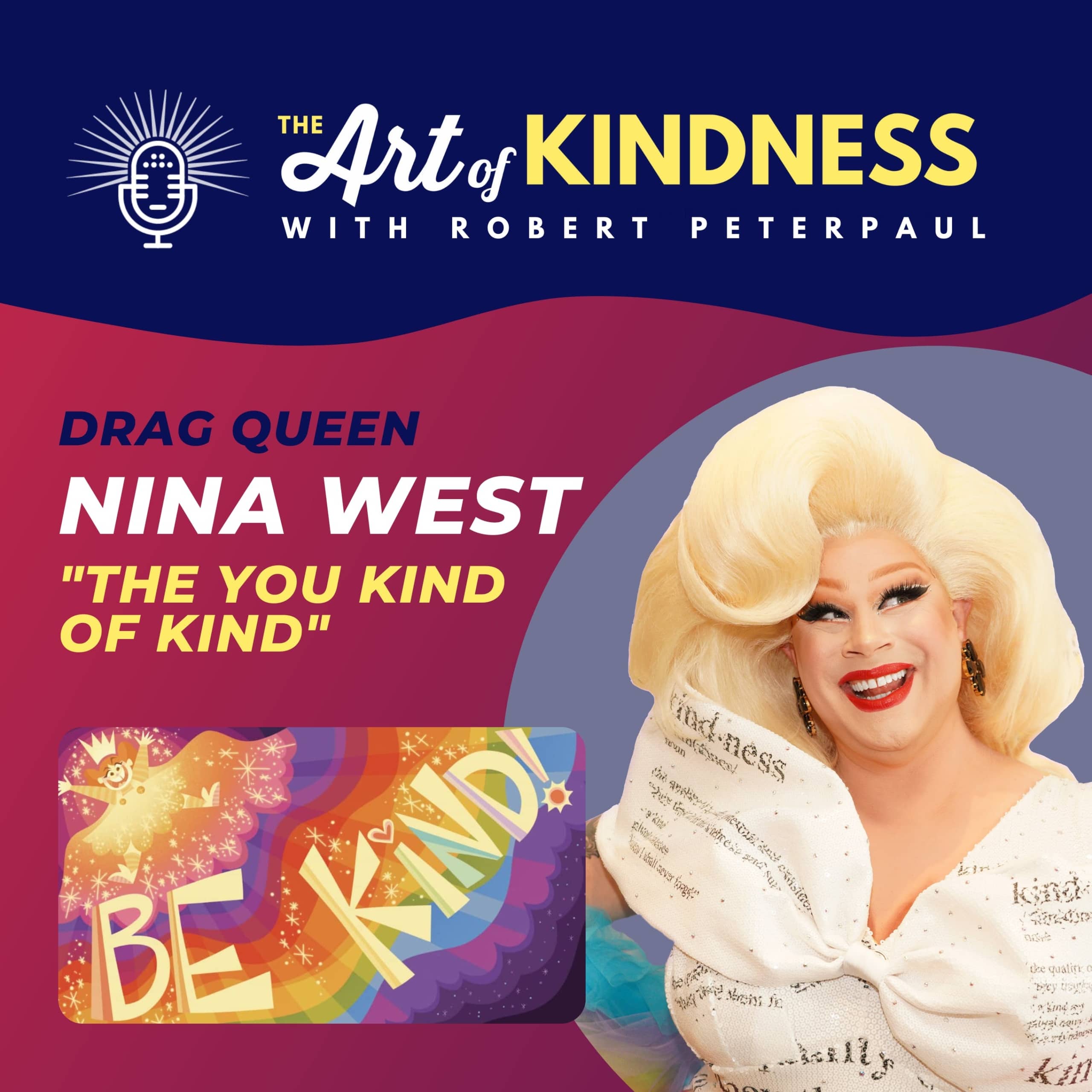 Nina West (RuPaul’s Drag Race) joins The Art of Kindness with Robert Peterpaul to discuss her new book The You Kind of Kind, collaborating with Dolly Parton, believing in yourself, acting in WEIRD: The Weird Al Yankovic Story alongside Danielle Radcliffe, touring the country with Hairspray and much more! Plus, don’t miss surprise guest Cassie Carroll for a special kindness tip of the week before her and Rob get married.

Nina West is an American drag queen, actor, singer, songwriter, and LGBTQ+ activist played by Andrew Levitt. She was named the “Most Googled Drag Queen in The World” from 2020-2021 with over 7.8 billion unique searches. She rose to national prominence in 2019 with her appearance on VH1’s Emmy-winning show RuPaul’s Drag Race Season 11, where she placed sixth and won Miss Congeniality. In 2021, she returned to the show as a guest and was anointed “America’s Sweetheart” by RuPaul herself. She made history at the 71st Primetime Emmy Awards in September 2019 when she became the first-ever person to walk the carpet in full drag, while her season won five Primetime Emmy Awards including Best Reality Competition Show.

On June 17th, 2020, Nina released a charity partnership with country music legend and possibly the best person on the planet (besides my Cassie), Dolly Parton – The “Dolly X Nina: Kindness is Queen ” Collection – with all proceeds going to the Dolly Parton Imagination Library and The Nina West Foundation to benefit LGBTQ+ youth and literacy. It sold out in hours. Speaking of philanthropy, Miss West has raised over $5million for charity and is often on the front lines of LGBTQIA issues.

In 2021, she partnered with Nickelodeon and Blue’s Clues for a series of Pride videos that went viral with over 2 million views. Nina hosted the first-ever DISNEY PLUS “This Is Me: PRIDE Celebration Spectacular,” a celebration of the LGBTQ community with Disney classics reinterpreted by LGBTQ artists like Hayley Kiyoko, Todrick Hall, and Alex Newell. She returned to the show in 2022 and performed with Disney Legend Alan Menken in a tribute to Disney Legend Howard Ashman. She has also fronted major advertising campaigns for multinational companies Pepsi, Pantene, Lane Bryant, BOMBAS, Bubly, and Procter and Gamble.

Nina is currently headlining the brand-new national tour of the Broadway Musical HAIRSPRAY from original Producer Jerry Mitchell in the lead role of Edna Turnblad, for which she has received rave reviews. Her first ever children’s book THE YOU KIND OF KIND is out NOW through PA Press. As if she’s not busy enough, Nina co-stars alongside Daniel Radcliffe and an all-star cast in the ROKU Original Movie WEIRD: The Weird Al Yankovic Story, which is also out now.