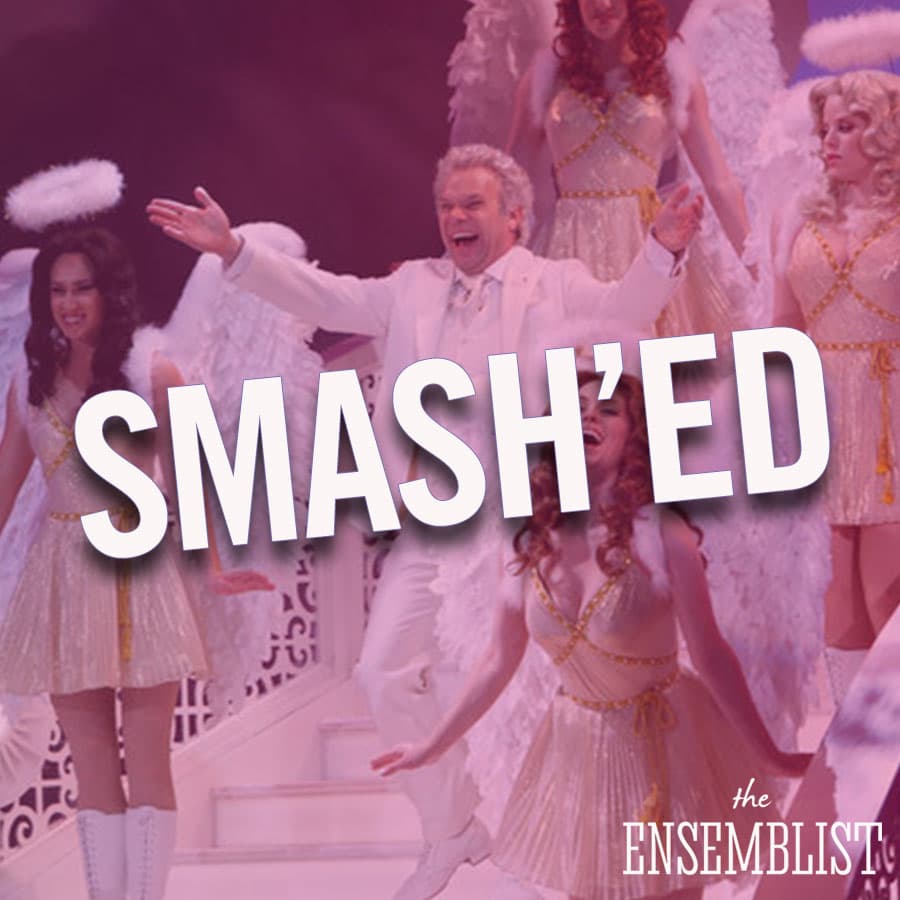 “Hell on Earth” premiered on April 2, 2012 (Happy…April Fools?). It was written by Scott Burkhardt and directed by Paul McGuigan. The episode was viewed by 6.03 million viewers, which is again down, this time by .11 million. Oof.

Featured Songs? Again, no Bombshell music, unless you count the snippet of the “Arthur Miller Medley” that Brian d’Arcy James sang at the piano, but we did get an original song by Shaiman and Whitman from Heaven on Earth, called “The Higher you Get, the Farther you Fall.” We also get a Times Square cover of “Cheers (Drink to That)” by Rihanna.

Everybody seems to be moving on after Bombshell workshop. Karen is picking up serving shifts and booking orange juice commercials. Ivy is back in Heaven on Earth, probably forever. But she is definitely not enjoying it, as she rolls her eyes and marks her way through performances and taking prescription pills on the side.

Julia’s husband Frank finds sheet music to a song she wrote about former flame Michael Swift. She admits to her affair but Frank storms out, telling her “sorry doesn’t cut it.” Frank confronts Michael, who tells Frank this isn’t the first time they had had an affair. Frank leaves him punched and lying on the sidewalk in front of New York Theatre Workshop, and walks out on Julia and their son Leo.

Out at a Glasshouse Tavern-type doppelganger, the Marilyn cast laments the production’s need to court a star. Jessica leads the charge, stating “Chasing a star is lame. It’s a musical. It’s a new American musical. Why can’t the songs be the star?” Ivy takes it one step further, digging at Karen that “she walks in with the Midwestern moonface and lands everything.”

Tom, Julia and Derek discuss stars to replace Ivy in the role of Marilyn, as well as a title for the musical about her. But unknown to Derek, Eileen is also meeting with potential new directors of the Marilyn musical, where she is spotted by New York Post columnist Michael Reidel. Derek fumes when he reads Reidel’s column, but agrees to stay on the project as long as Eileen “finds him a star.” Ellis ends up connecting Eileen with an unseen movie star named Rebecca Duvall.

After taking a mysterious prescription at her dressing room station, Ivy takes the Heaven on Earth stage under the influence, falling center stage and getting yelled at by Norbert Leo Butz to “get off the freaking stage.”

In what is the official jumping the shark of Smash, Ivy Lynn storming out of the Shubert Theatre in costume, wig and mic into Times Square. When Karen, who just happens to there to drop off Ivy’s misplaced sunglasses, follows her out Ivy lashes out at her, Ivy yells “You’re nothing special. There are thousands of girls just like you, millions of girls just like you.”

Karen then follows Ivy into a liquor store, giving her $20 for a bottle of booze and drinking in public on their way into Duffy Square. They then sing an impromptu duet accompanied by a busker on an electronic keyboard, a drummer on five gallon buckets and two guitarists. Tom and Sam end up at an all-night diner until 5am, on what may or may not be a date. But on the bright side, the episode ends with a title for the new Marilyn musical: Bombshell.