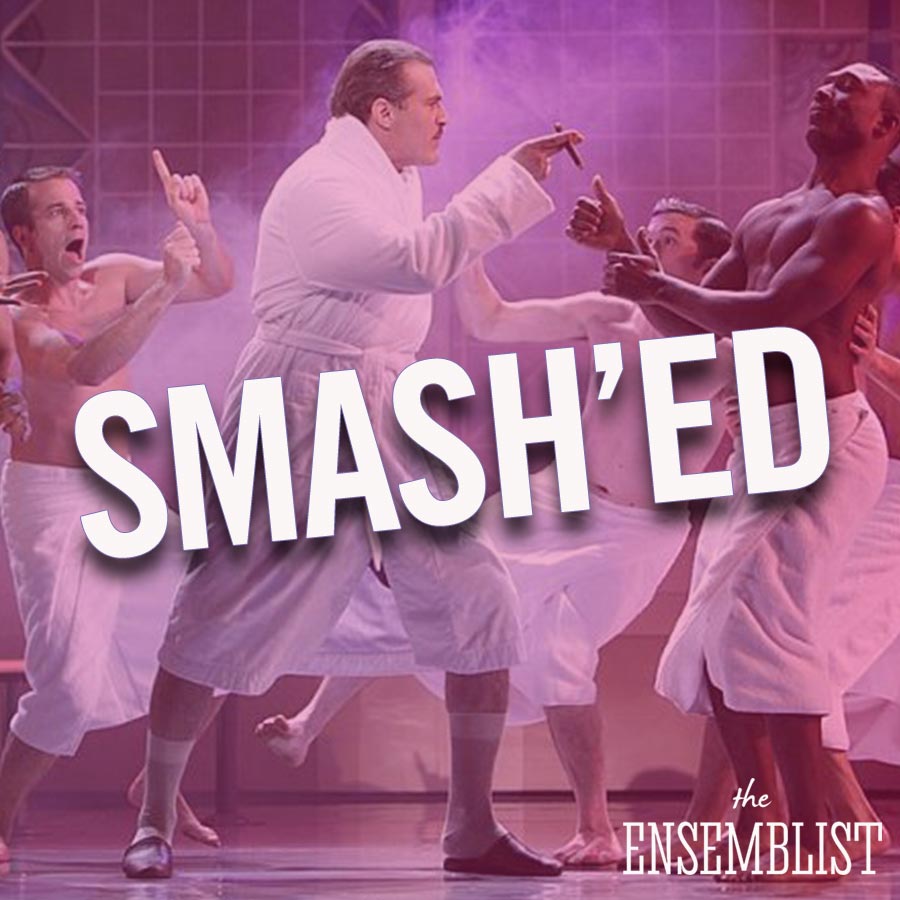 “Previews,” the penultimate episode of the season, premiered on May 7th, 2012. It was written by David Marshall Grant, and directed by Robert Duncan McNeill (another weird Star Trek connection: Robert McNeill played Lieutenant Tom Paris, also on Star Trek Voyager! So weird….I wonder what the connection is….). The viewership was up from the previous week, being seen by 5.72 million viewers. Thank goodness.

Since this episode included Bombshell’s first preview, we heard snippets of all our favorites by Shaiman and Whitman: Let Me Be Your Star, The 20th Century Fox Mambo, Mr. & Mrs. Smith, Don’t Say Yes Until I Finish Talking, and a reprise (finale?) of Secondhand White Baby Grand. One newcomer to the original Smash catalog was (get ready for it) the titular song of Smash! sung in its entirety by Megan Hilty and Katherine McPhee. Two covers in this episode were Kurt Weill’s September Song, sung by Anjelica Huston, and Donnie McClurkin’s Stand, sung by Leslie Odom Jr. and Katherine McPhee.

The first preview of Bombshell and while Derek doesn’t want to jinx it he thinks the show is in pretty good shape! But Bobby the Soothsayer tells us: ““You go out of town and all hell breaks loose.”

He’s right, as Derek and Rebecca continue to canoodle, even after Karen tells her that Derek is seeing Ivy. Michael Swift is back in the show, arriving at the theatre only to be greeted by Julia’s entire family. But despite the backstage drama, the show goes on.

In a never-before-seen number, Ivy and Karen lead the female ensemblists in a number that feels wildly reminiscent of 9 to 5 (down to use of a mustachioed Marc Kurdish.) All in all, the show goes well but ends to crickets instead of wild applause.

What’s the problem? Ellis hits the nail of the wig-prepped head, saying “It’s Rebecca. She’s good and all but she’s not landing any of the numbers.”

When Ivy finally confronts Derek about his dressing room antics, he tells her “Rebecca needs my attention, and I’m giving it to her. Is there any other approach?” (Spoiler alert: there is.)

After accepting Dev’s second take at a marriage proposal, Karen comforts Rebecca about the first preview audience’s poor response to the show. But as she is confiding in Karen, Rebecca has an allergic reaction to her smoothie and gets sent to the hospital.

With previews for the weekend cancelled, but the creative team is plotting about their game plan if Rebecca doesn’t recover in time. The understudy, Karen, hasn’t had any time on stage, but Ivy knows the whole show. Yet, neither gets the chance when it is announced that Rebecca recovered.

And yet while the drama seems high, it all seems to absolve by Sunday morning when Sam gets the entire Smash family goes to church! Wrongs are absolved, sins are forgiven and Karen unexpectedly leads a gospel number. But after the service, Rebecca calls Karen to say that even though she’s not going back into the show and that the production will have to crown a new Marilyn after all!