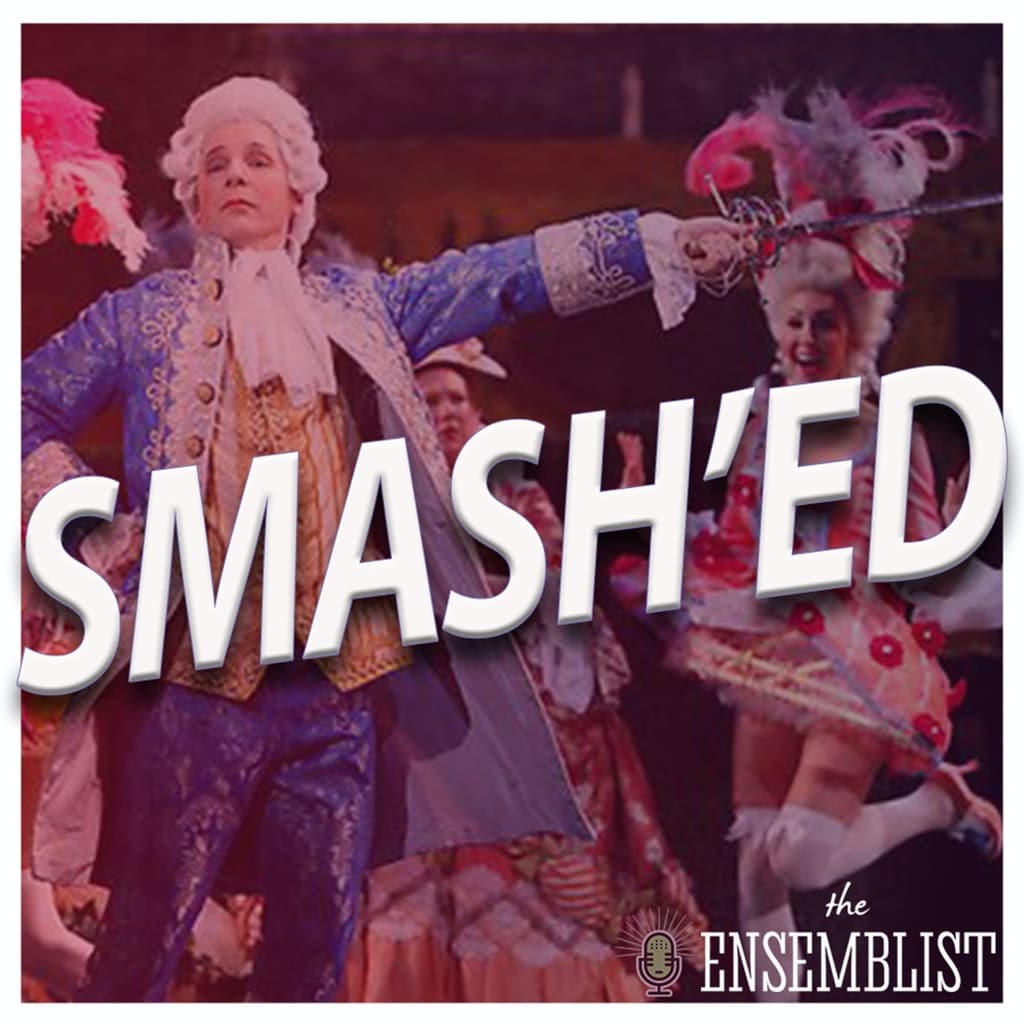 “Musical Chairs” premiered on March 19th, 2013. It was written by Becky Mode, and was directed by Broadway’s very own, Casey Nicholaw! The viewership was down again from the previous week, by about a quarter-million viewers, amounting to a total of 2.66 million.

We saw two full original songs and two excerpts this week, which means, no pop covers! Our in-home team of Shaiman and Whitman wrote Liaisons’ Ce N’Est Pas Ma Faute (It’s Not My Fault) sung by Sean Hayes, and Bombshell’s The National Pastime, sung and tapped by Katherine McPhee and the Bombshell ensemble. From Hit List we heard a reprise of Heart Shaped Wreckage from last week, and a new opening song called Rewrite This Story, written by Pasek & Paul.

Now that Derek is signed onto direct Hit List, Scott Nichols of Manhattan Theatre Workshop offers the theatre’s 80-seat underground space. He is afraid it doesn’t have much of an overwriting theme to appease his mainstage subscribers, but he will reconsider if stubborn Jimmy and agreeable Kyle are able to reinvent Hit List by Friday.

Taking over the direction of Bombshell is harder than Tom anticipated – it’s like Tom and Karen are speaking different languages. In the absence of any legal agreements about using Derek’s concepts in Bombshell, Tom is forced to reinvent the show. And in the absence of Derek’s choreography, Tom’s staging on numbers like “The National Pastime” turn Bombshell into a sugar-induced headache.

What the show also needs is to get rid of Jerry Rand as a producer. The silver bullet comes in the form of a contract Eileen signed with the Marilyn Monroe estate for the use of her journals – which heavily influenced Julia’s book. In a hostile takeover, the women of Bombshell force Jerry to sign over the show to Eileen.

At Liaisons, Ivy has cemented her talent as “The Terry Whisperer,” but she and Terry both hate this “meh” version of the show and make a pact that it might as well go down in a blaze of glory. With an over-the-top version of a Terry Falls-helmed number called “It’s Not My Fault,” Liaisons announces that it will close at the end of the week, making Ivy a free agent.

The musical chairs between Bombshell and Hit List come to a head at the opening night of Liasions, where everybody wants what they can’t have: Jerry and Karen want Derek to return Bombshell, while Derek wishes that he had a book writer like Julia and a star like Karen. It’s unclear what Jimmy wants, other than to not write a new opening number for his show.

Karen starts the musical chairs in motion, acknowledging to Tom that she’s not his Marilyn – Ivy is. Derek also admits to Kyle and Jimmy that he believes in Hit List so much he will even direct the show in a 80-seat blackbox. But it turns out he doesn’t have to – when Jimmy writes Hit List a banger of a new opening called “Rewrite This Story.”