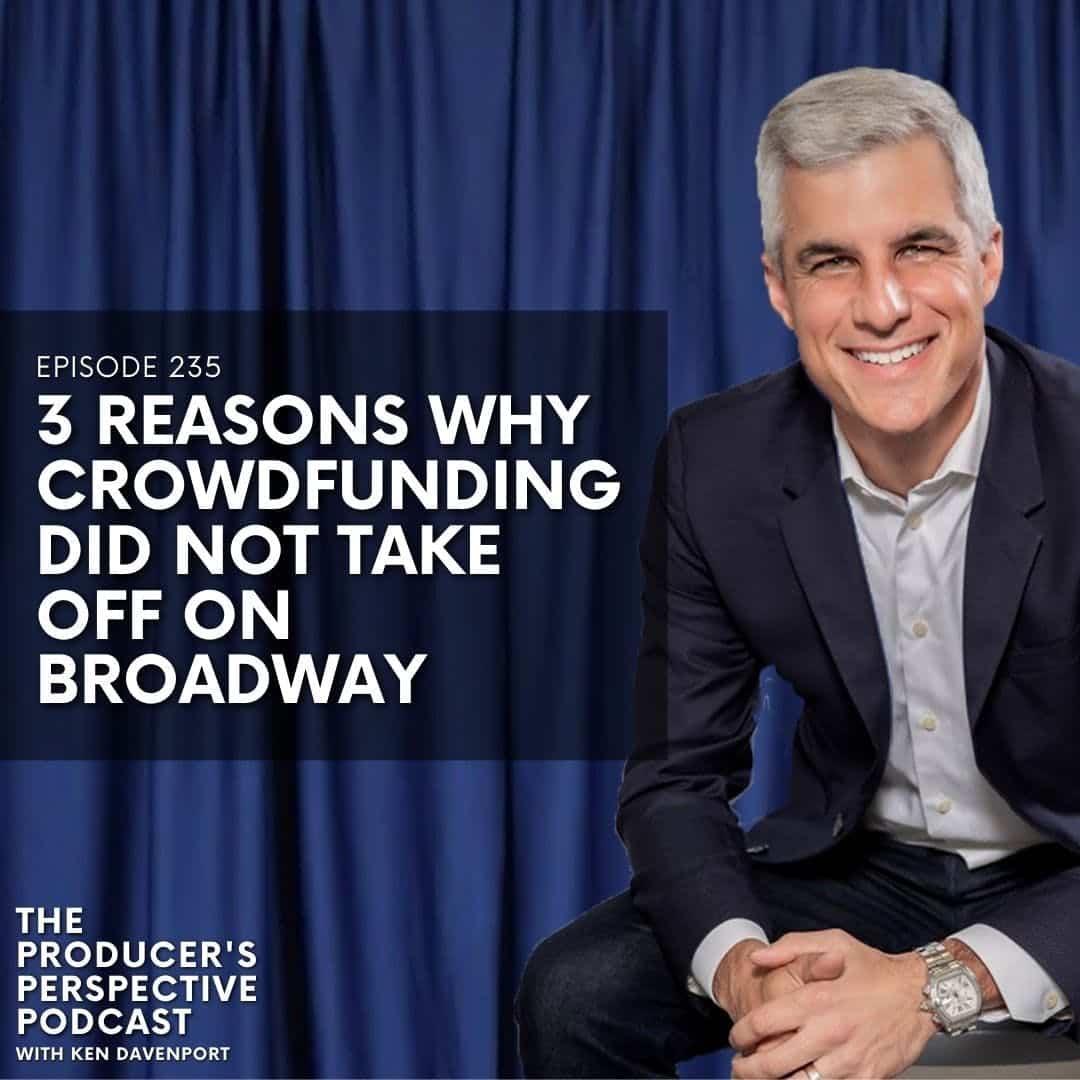 235 – 3 Reasons Why Crowdfunding Did NOT Take Off on Broadway

It has been 10 years (!) since I crowdfunded Godspell. It remains one of the most difficult things I’ve ever done in this business.
It took two years to put together. It took three law firms. I had to pass a securities exam. Oh, and let me tell you when this SEC slaps your wrist in the midst of your offering, you lose some sleep.
But, like most difficult things, it was also one of the best things I ever did for my business. And my life.
Not only did we fund the production, and help launch the careers of some superstars, but I’m also still friends with many of “People of Godspell”, which is what we called our Producers and Investors (we had over 730 of them!).
We created a family. And it still exists. (That’s pretty common with Godspell, actually, as anyone in it can attest.)
After we successfully crowdfunded the show, using an old regulation called a “Reg A,” Congress passed The Jobs Act . . . which made it MUCH easier for businesses to crowdfund. (Bad timing on my part!)
Everyone predicted an explosion of this type of microfinancing in all industries . . . Broadway and Off-Broadway included.
And it didn’t happen.
I don’t know of ONE Broadway or Off-Broadway production to utilize the new “Regulation CF” since it was passed.
Why?
Here are three reasons why.

8 Tips for a Kick A$$ Kickstarter Campaign: read here

How To Raise Money For the Arts… Or For Anything: click here

About the podcast:
After 6 years of podcasting with one style, we’re shaking it up here – no guests! Just me! I’m giving you micro-episodes with my perspective on Broadway and the comeback on Broadway.

About me:
Ken Davenport is a Tony Award-winning Broadway producer and writer whose credits include Once On This Island (Tony Award), Gettin’ the Band Back Together, The Play that Goes Wrong, Groundhog Day (Tony nomination), Deaf West Theatre’s Spring Awakening (Tony nomination), It’s Only a Play, Macbeth starring Alan Cumming, Godspell, Kinky Boots (Broadway – Tony Award, National Tour, Toronto, Australia, and West End), and more, including multiple Off-Broadway productions! Ken’s shows have been produced internationally in over 25 countries around the world.
He is the founder of TheaterMakersStudio.com, a one-of-a-kind “masterclass” community that provides training and inspiration from Broadway’s best to writers, directors, producers and more.
Ken also serves as the Executive Producer for North America for Andrew Lloyd Webber’s Really Useful Group. Outside of theatre, he has produced award-winning content for both film and TV. Ken’s unique production and marketing style has garnered him international attention in numerous publications, including Vanity Fair and The New York Times.
Upcoming projects include Broadway Vacation, Joy the Musical, My Life In Pink, Harmony: A New Musical written by Barry Manilow and Bruce Sussman, a musical based on the life and songs of Neil Diamond, and a musical based on the life of Harry Belafonte.

Keep up with me @KenDavenportBway on Instagram.
Check out my blog for daily content: www.theproducersperspective.com
This episode was produced by Mary Dina.
Learn more about your ad choices. Visit megaphone.fm/adchoices