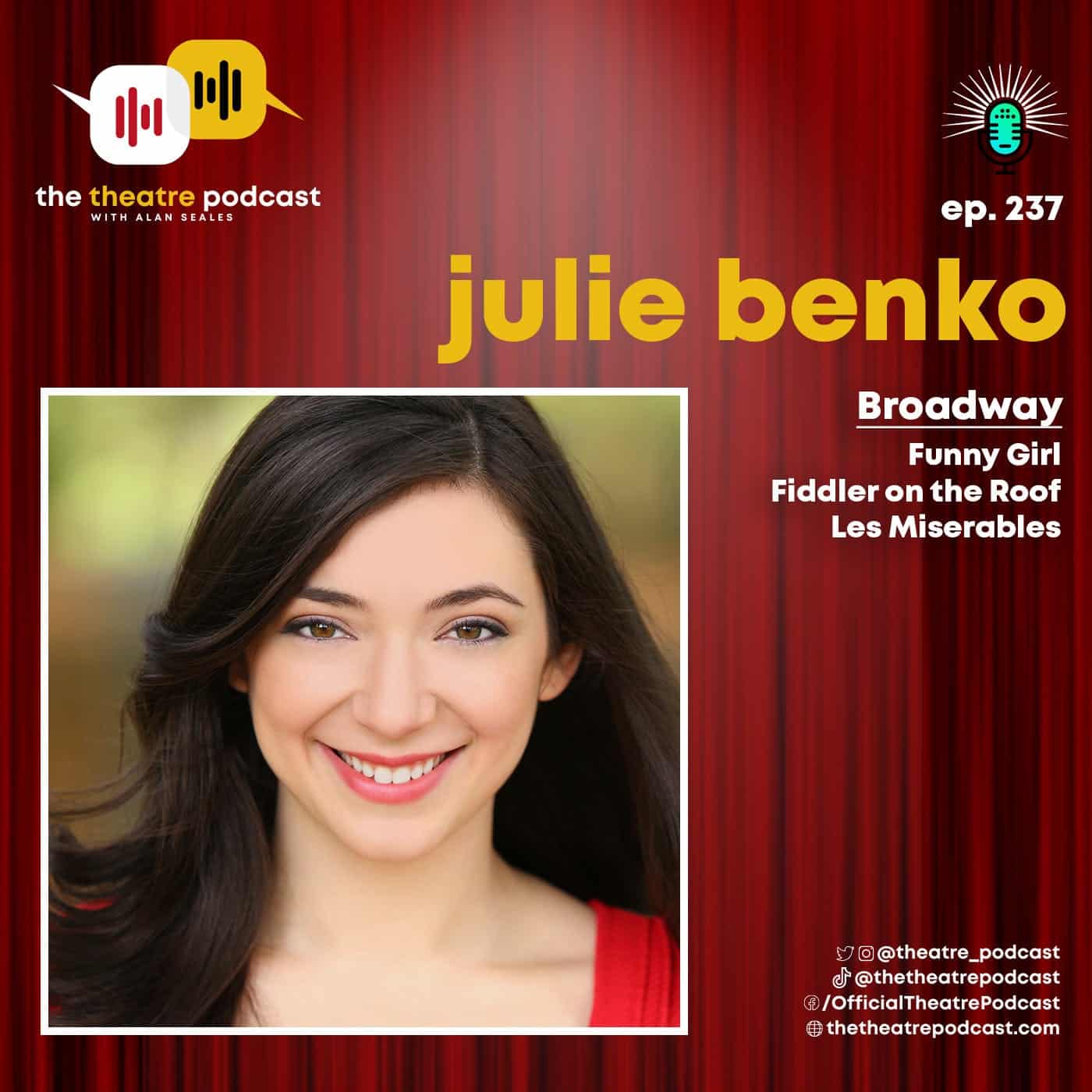 Ep237 – Julie Benko: Fanny Brice Was the Role She Never Knew She Wanted

With all the talent and awards Julie Benko has received at such a young age, it begs the question: What can’t she do? Julie proves that it’s never too late… or too early to learn anything. Currently the Fanny Brice alternate in “Funny Girl” on Broadway, Julie shares her life as an actor and how she handles the hectic schedule that comes along with it. She also recalls doing a production of “Fiddler on the Roof” when she was younger which changed the trajectory of her family. Unlike most, she spent her time during the height of the pandemic doing performances online and raising money for various charities, including starting a series with her husband called, “Quarantunes” which also became the basis of their album “Hand in Hand” that was just released in August 2022. Initially scared of comedy, Fanny Brice was the role she never knew she wanted, but thanks to her friends’ encouragement and help, Julie pushed through with the audition and eventually got the part. She talks about doing eight shows a week, what it’s like being thrust into the spotlight, how she recovers and recharges, and the training that helped her in performing with ease. From acting and singing to writing and directing, Julie is set to do everything all at once and try other mediums too—all of which are motivated by her love for learning and passion for connecting with others.

Julie Benko is an amazing actress, singer, writer, musician, director, and philanthropist based in NYC. She holds a BFA in Drama and an MFA in Acting from NYU’s Tisch School of the Arts. She currently plays as Fanny Brice in the Broadway show, “Funny Girl”, and released her brand new album, “Hand in Hand” last August. Julie’s stage credits include “Fiddler on the Roof”, “Les Miserables”, “Spring Awakening”, “Once”, “The Fantasticks”, and “Rags” among others. She has also appeared in several films, including “Alberto”, and “Unrequited Vanya”. Apart from these, Julie is also a recipient of numerous nominations for her acting skills, including the Wilde Award for Best Leading Actress in a Musical which she won for her performance as Girl in “Once”. She also won the Gold Medal and the Johnny Mercer Award in the national American Traditions Vocal Competition. Her recent projects include writing, directing, and starring in her first short, “The Newlywed’s Guide to Physical Intimacy”, which won an Honorable Mention at its premiere July 2020 premiere at New Faces New Voices Film Festival. Her first full-length play, “The District,” was also named a semifinalist at the 2022 Eugene O’Neil National Playwrights Conference. During the pandemic, Julie raised money for different charities through her “Quarantunes” musical duo series with her husband.