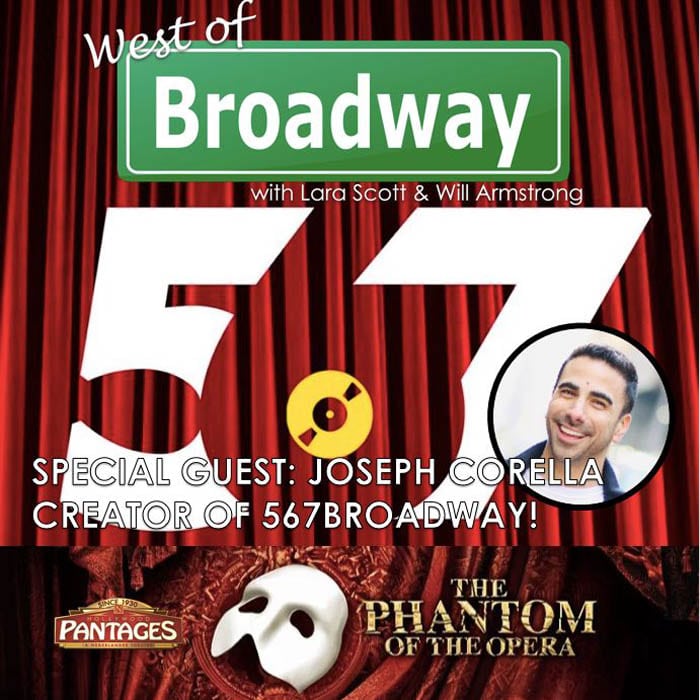 On this episode of West of Broadway, we discuss Lara’s trip to the Pantages to see The Phantom of the Opera tour now playing til July 7th and then we touch on the Geffen Playhouse’s production of Mysterious Circumstances. Inspired by The New Yorker article Mysterious Circumstances: The Strange Death of a Sherlock Holmes Fanatic by David Grann, the play centers around the true story of the mysterious death of Richard Lancelyn Green, the world’s foremost scholar on Sherlock Holmes. After spending two decades searching for the missing papers of Sir Arthur Conan Doyle, Green came close to unlocking the secrets behind Holmes’ creator when he tracked down an elusive box which was said to be cursed. Featuring Hugo Armstrong, John Bobek, Austin Durant, Leo Marks, Ramiz Monsef, Helen Sadler & Alan Tudyk and playing untilJuly 14th.

And finally, we get to speak with Joseph Corella, Dancer, Choreographer, Fitness Instructor and all around amazing human who created the new fitness sensation 567Broadway! Originally developed in Los Angeles to dedicated and enthusiastic class goers, Joseph has spent the past several years perfecting a fun filled home fitness dance workout for all levels that inspires movement, health and happiness by harnessing the magic of musical theater song and dance. In this non-stop cardio dance workout, you join Joseph Corella and his cast of real-life students as you follow along to the easy-to-learn dance fitness routines that will leave you shining bright like the Broadway STAR that you are! For more info go to https://www.567broadway.fitness/