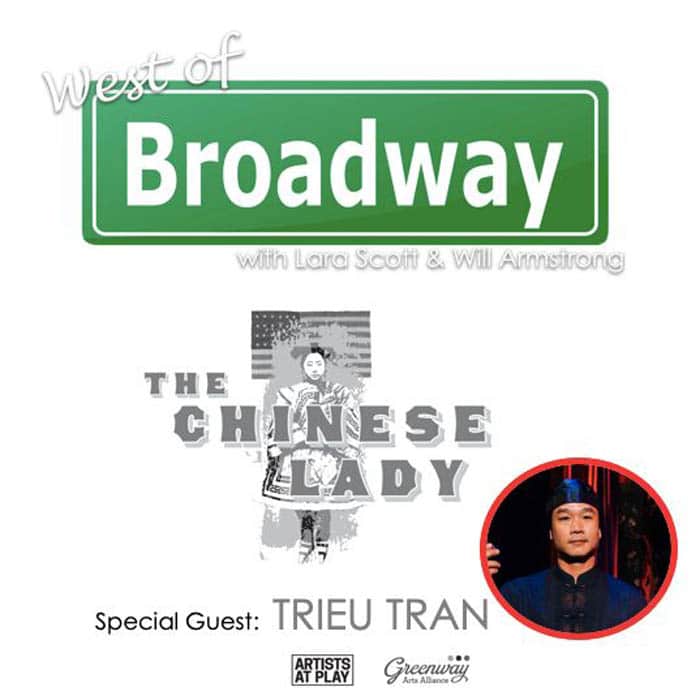 Will and Lara are talking Artists at Play and Greenway Arts Alliance’s LOS ANGELES PREMIERE OFThe Chinese Lady with one of the stars Trieu Tran.
September 7-29, 2019 | Greenway Court Theatre
The Los Angeles premiere is directed by
Rebecca Wear (Lauren Yee’s Samsara – Coeurage Theatre) and features Amy Shu (Susan Soon’s He
Stanton’s We, the Invisibles – Cal State L.A.) as “Afong Moy” and Trieu Tran (LADCC Nominated for “Alan
Strang” in Equus – East West Players) as “Atung.” THE CHINESE LADY is playing now through September
29, 2019 at Greenway Court Theatre (544 N. Fairfax Avenue) in Los Angeles.
Inspired by the true story of America’s first female Chinese immigrant, The Chinese Lady is a dark,
poetic, yet whimsical portrait of America through the eyes of a young Chinese woman. Afong Moy (Shu)
is 14 years old when she’s brought to the United States from Canton in 1834. Allegedly the first Chinese
woman to set foot on U.S. soil, she has been bought and put on display for the American public as “The
Chinese Lady.” For the next half a century, she performs for curious museum-goers, showing them how
she eats, what she wears, and the highlight of the event: how she walks with bound feet. As the decades
wear on, her celebrated sideshow comes to define and challenge her very sense of identity. The Chinese
Lady blurs the line between the observed and the observer, and gives us new eyes on the history of
American entitlement and immigration.
Named a New York Times Critic’s Pick in November 2018, the Times said of The Chinese Lady,
“Extraordinary play…piercing…heart-rending…” and “…gently comical drama…”